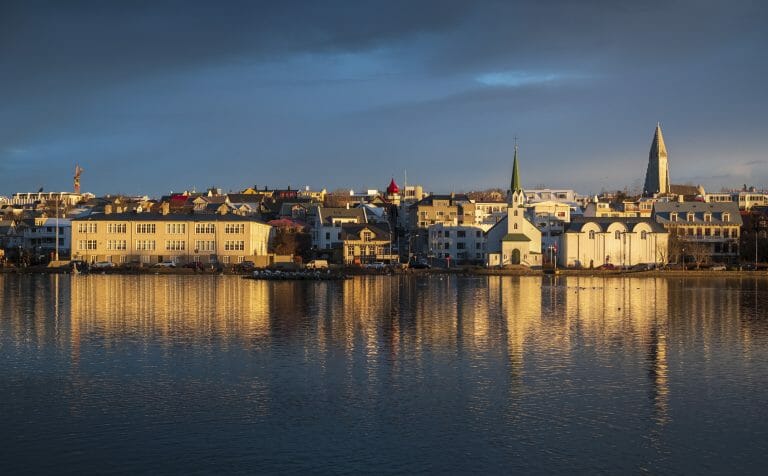 One of the first things you’ll discover upon visiting Reykjavík is that it’s very walkable. The majority of the city’s restaurants and shops are located along two streets – Skólavörðustígur and Laugavegur. If you want to explore the city beyond the confines of these well-trod roads, we have a few suggestions. Stretch your legs on these three walks in and around Reykjavík.

Once around the pond

Smack-dab in the middle of town, you’ll find Tjörnin, Reykjavík’s central pond. We recommend starting this walk at the north end of the pond, where the ducks congregate and take a clockwise route.

You can start with greeting the ducks. If you have a snack for them (heed the signs about when it is and isn’t allowed to feed the ducks), a few may even swim alongside you on the first stretch of your walk. Take the lower sidewalk and cross over Skothúsvegur to leave the roadside and enter Hljómskalagarður park.

While looping around the southern end of the pond, you’ll see the octagonal Hljómskálinn pavilion, the first structure in Reykjavík built for music events; a statue of beloved poet Jónas Hallgrímsson, and a sculpture garden showcasing the works of some of Iceland’s most renowned female sculptors.

Once you’ve crossed back over Skothúsvegur on your way back to City Hall, you’re at the spot with the best views over Tjörnin. Along this stretch of the walk, you’ll find the statue Úr Álögum, one of Einar Jónsson’s phenomenal statues decorating the city. This one depicts the tale of Saint George and the Dragon. There’s also a park bench at this point in the walk with a bronze likeness of poet Tómas Guðmundsson and a QR code you can use to listen to a reading of his poem “Hotel Earth”.

Finish your walk with a visit to Reykjavík City Hall, where a massive topographic map of Iceland is often on display. Finally, exit City Hall via its long footbridge over the end of the pond, snap a picture with the Monument to the Unknown Bureaucrat and head off to your next adventure.

This coastal path running east from the Harpa Concert Hall is named the Sculpture and Shore Walk. While it is dotted with some lovely art, it’s also an excellent path to walk, jog or cycle to get that fresh sea air in your lungs and sweeping views of Esja forever imprinted on your soul – it’s a stunning mountain.

But let’s talk about the art. The walk starts at the Harpa, as mentioned above, so it should be pointed out that it is a work of art in its own right. Its iconic glass facade is the creation of Icelandic-Danish artist Ólafur Elíasson. Explore the interior and be sure to look up for a complete immersion in the majesty of the building.

On with the walk. The first sculpture you’ll encounter is the beloved Sólfar, or the Sun Voyager. While it’s often mistaken for a Viking ship, artist Jón Gunnar Árnason created it as a sun ship, meant to convey a dream of hope, progress and freedom. It was unveiled on August 18, 1990, to commemorate Reykjavík’s 200th birthday.

Walking along, you’ll encounter Pétur Bjarnason’s sculpture Partnership, which has a twin in Miami, U.S. The sculptures were made to commemorate 50 years of diplomatic relations between Iceland and the United States. Jóhann Eyfells’ Íslandsvarðan sculpture was completed in 2006 by pouring liquid metal into moulds the artist created in the earth.

A personal favourite sculpture of this writer is Shore Piece by Sigurður Guðmundsson. It’s the largest piece displayed along this route, so you shouldn’t miss it.

Continue to the bright yellow Höfði lighthouse, and cross over Sæbraut to see Höfði House, where Russia President Mikhail Gorbachev and the U.S. President Ronald Reagan met in 1986 to discuss the end of the Cold War.

From here, either retrace your steps or cut up Katrínartún to Laugavegur and hang a right to meander back to the city centre.

If your idea of a walk means venturing off paved paths, head to Öskjuhlíð. Perlan tops the wooded hill on the outskirts of the city centre, and it is a lovely forest to wander through. It’s crisscrossed with rough paths, mountain bike ramps and massive rocks that are undoubtedly the remains of poor trolls that got caught out in the sun.

Öskjuhlíð was used as a lookout by British and American soldiers during the Second World War, so you may come across some abandoned bunkers during your walk. Signs have been erected explaining the history of the bunkers.

Spend an hour wandering among the birch and pine trees, or continue down to Nauthólsvík geothermal area and follow the path due west to follow the seaside around the Reykjavík airport, heading back into the city centre when the path joins up with Suðurgata.

The DIY approach is all fine and good, but sometimes you want someone to guide you and regale you with fascinating trivia while you walk. If that’s more your speed, check out Reykjavík walking tours on WhatsOn.is.