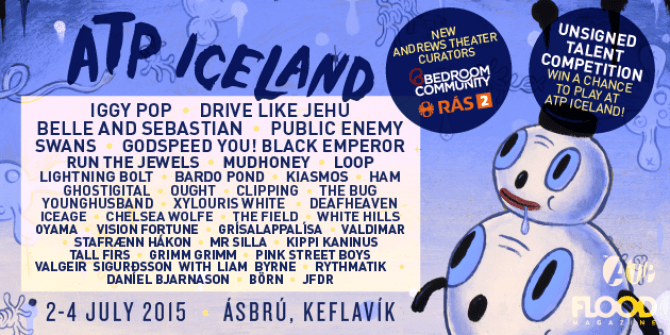 So ATP festival 2015 is upon us for the third time here in Iceland. It’ll be held on July 2nd to the 4th. Based in London, ATP has been curating events all around the world but I like to believe we have something very special here in Iceland. The festival is held in the former NATO base in Keflavík, where the US troops used to hang out. Now that they’ve left, we have plenty of space there for having a great time with some great music.

So ATP is named after the song All Tomorrow’s Parties by the Velvet Underground. There are different curators for each event and past curators include Mogwai, Nick Cave and the Bad Seeds, Animal Collective, the Flaming Lips and lots of other cool artists. The festival features a diverse range of genres and always stays intimate, unlike some of the bigger, more corporate music festivals. The capacity is only 5000 people.

ATP has just released a detailed time schedule! Buses will be running from Reykjavík and back and you can also camp by the festival grounds or get accommodation in Keflavík.

This year’s lineup features some big names such as Iggy Pop, Belle and Sebastian and Public Enemy, but the Icelandic bands, though maybe less known abroad, are just as exciting. So I’ll tell you a little bit about my favourite ones!

Grísalappalísa is Iceland’s sexiest rock band. They’re well known for their live shows, where band members and the audience alike tend to get very sweaty and partially naked. They radiate an insane amount of energy from the stage. This will be good!

I saw these guys play at Iceland Airwaves last year and loved them. They play instrumental electronic music with a brass twist and almost tropical rhythms that will get you moving. Top notch stuff.

They play shoegaze rock with a sleepy, noisy feel, though some of their songs are more upbeat. The three singers take turns singing, building a sort of wall of different vocals. Their album Goodboy has gotten some excellent reviews and when I saw them at Loft Hostel the other day they sounded great!

Legends in the Icelandic music scene, HAM have been around since the late 80s and have never been better. Their music is heavy, dramatic rock and has often been associated with heavy metal, even though the band has never classified itself as such. Their latest album is called Svik, harmur og dauði (meaning Betrayal, misery and death). HAM’s members include a comedian, an Oscar-nominee and a member of the Icelandic parliament.

I’m a huge fan of Caterpillarmen. These guys were the winners of ATP’s first unsigned talent competition and thus won their deserved spot at the festival. They’ve been around since 2008, playing at various gigs and festivals in Iceland, as well as doing a tour with tUnE-yArDs. They play energetic, fun, raw prog pop rock and they do it well.

So I can’t wait to see all these cool musicians play! I’m going there with all my siblings, so if you see four people that all look the same, don’t hesitate to say hi and try to guess which one’s me! See you there.