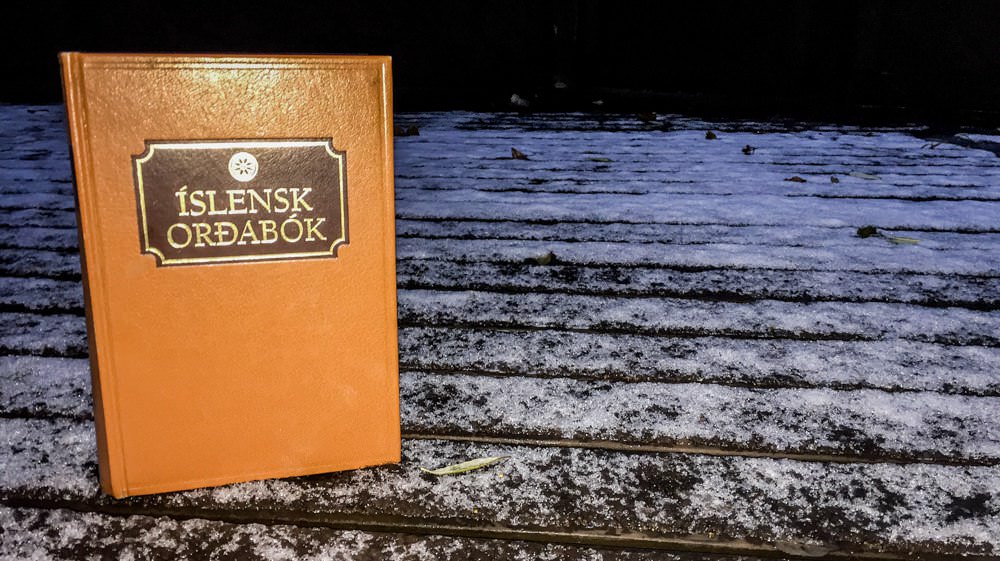 Language is a strange and beautiful thing, the Icelandic language especially so. As with any language, there are some words that just can’t be translated. The Swedes have a word for something that’s not too much, not too little, but just right, and the Germans apparently have a word for eating your feelings (kümmerspeck, literal translation: grief bacon). In Iceland we have Jæja. Without further ado, I present to you: 5 Icelandic words you can’t translate.

If your friend is insisting that you drive him across town and back again to get a pizza, when he can just get one from around the corner and walk, that’s “vesen.” If someone is objecting to something perfectly reasonable, making a big deal out of something or generally being difficult, he/she has got vesen.

Let’s say you’re dealing with the tax office and you have to turn things in by mail, not email, and they insist you turn everything in triplicate, that’s “vesen” (don’t they have a photocopier?) Actually pretty much anything that has to do with the tax office, or any government office in general, is probably “vesen,” in my experience…

This is a word roughly meaning “run off for a little while,” but only recently did I find out it is a unique cultural phenomenon. Basically, Icelanders tend to work pretty long hours, but they also are generally fairly relaxed about people running off to do an errand if the task at hand isn’t life-or-death.

So if you’re at work, but you have to go to the doctor, or the bank, you tell your boss you need to “skreppa” somewhere in the afternoon. Often, no further explanation will be required, if a man needs to “skreppa”, he needs to “skreppa”. (If you do this too much though, people will think you’re a jerk).

The closest thing English has to this is the phrase “can’t be bothered.” Except that is the exact opposite. Let me explain: “Nenna” basically means that you CAN be bothered to do something, which I like a lot more because it’s in the positive. “Nenna” is sort of a mixture of wanting to, being able to and feeling like doing whatever you nenna or don’t nenna.

If I ask you if you, for instance, want to pick us up some pizza, you can say you “nenna” it, meaning you maybe don’t particularly want to, but you don’t mind doing it if I ask you to, either. Or if you don’t “nenna” it, you can’t be asked.

“Nenna” can also be referred to, semi-seriously, as your ethereal quality of “nenna”-ing things in general, for instance when you’re stuck studying in the library, you can ask where your “nenna” went.

This infamous word can mean almost anything, or absolutely nothing, as the case may be.

In a lot of circumstances, it means “Well,” – though not meaning you did something well – but rather “well, then” or “well, well, well…”

But you can use it in all sorts of situations, if you’re bored and want to go, you can give your friend an inquisitive “jæja?,” meaning “are you ready to go?” or if you don’t really wanna do something, but everyone is pushing you, you can say “jæja…” with a tone of defeat, meaning “alright then.”  It also works when you really disagree with someone but don’t want to say that out loud in case that makes him/her go on talking, just answer whatever statement he/she makes with a testy “jæja”. It depends almost entirely on the situation and the tone of voice.

When it means absolutely nothing, though, is my favourite use of the word. It’s less common these days, it used to be VERY standard, when there was an awkward silence in a conversation, to simply exclaim with a long, languid “jaaaaaæjja….” to fill the silence.

This could then be answered with another “jæja” from the other person, and back and forth until somebody thought of something else to talk about. My generation does this almost only ironically, since to us it only serves to point out that there’s an awkward silence going on.

You could also start a conversation with “Jæja,” especially in my parent’s generations, and for men in particular. You see, it would be rude to just walk up to someone you don’t know and start talking to them – maybe they’d rather be left alone.

So you would look into the air in their general vicinity and say – as if to yourself, really – “jaaaaæjja….” If the other person responded with a short, determined “jæja,” you could start making conversation. If they say nothing, you just stay quiet.

Basically, it’s the only Icelandic word you need to learn.

It would be too simple to translate this word as “hardworkingness.” (But even that is not a word in English, according to my spell check). It’s closer to the word “mettle,” or the Finnish concept of “sisu,” but neither of those completely captures the meaning.

Literally, “duga” just means something will “do.” It is “enough”. So when you tell someone they’re “duglegur,” really you’re just saying “You are sufficient. You’ll do.” But the word has come to encompass both hardworking-ness, determination, diligence, intelligence and a number of other undefinable traits – basically saying “you have what it takes to make things happen.”

And let’s not get into what a crazy work-culture Iceland has, that the word for being “hardworking” is the same as being “good enough.”

What are some of your favourite untranslatable Icelandic words – or what are some words you can’t say in Icelandic?