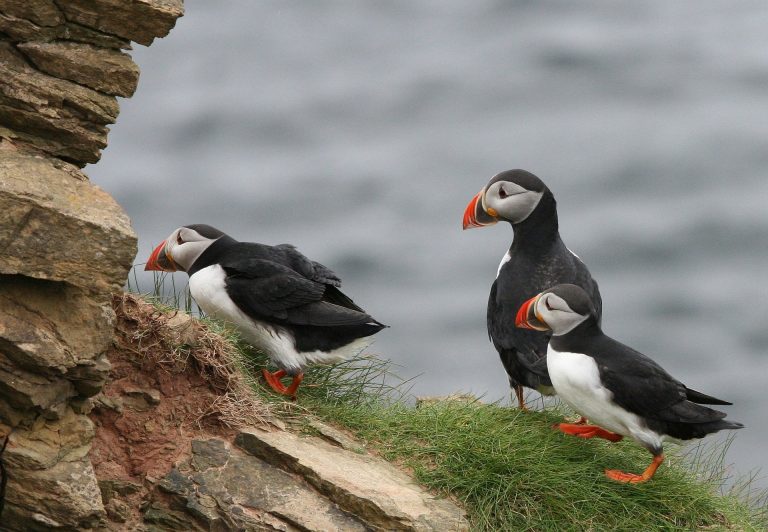 6 Things to Know About the Atlantic Puffin

Try not to squeal, but… the first puffins of the season have been spotted in Iceland! What are these loveable creatures, and where did they return from? Read on for six facts you may not know about the puffin.

There are three types of puffin

While it’s the Atlantic Puffin that you’ll see along the shores of Iceland, there are actually three types of puffin in the world. Holding court in the Pacific Ocean are the stunningly quaffed Tufted Puffin and the Horned Puffin, which look very similar to their Atlantic cousin save for a black horn of skin above the eyes of the adults.

The three puffins are auks, birds that are excellent swimmers but far less skilled on land. As auks, puffins are related to the great auk, which went extinct in 1844 when the last two birds were hunted on Eldey, a rocky island off the coast of Iceland’s Reykjanes peninsula.

Specifically, the Atlantic, horned and tufted puffin are of the Fratercula genus, Latin for “little brother.” The name refers to the bird’s black and white plumage, making them appear to be wearing monastic robes.

We’ll focus on the Atlantic puffin from here on.

They winter at sea

The Atlantic puffin nests in colonies each summer on the shores of Iceland, Norway, Greenland, Atlantic Canada, and the Faroe Islands, but they spend their winters at sea.

Not much is actually known about what puffins do at sea all winter, though it is known they can drink seawater and dive for fish to eat. While adult puffins return to their nesting sites every spring, younger puffins spend a couple of years out at sea before coming ashore to find a mate.

The birds’ colouring is ideal for avoiding predators while at sea. Their black backs blend in with the dark ocean when viewed from the air, and their white stomachs look like the sky shimmering through the water’s surface to any larger sea creatures looking for food.

Their colourful beaks are seasonal

While wintering at sea, puffins moult their feathers (making them unable to fly for a few months) and the colourful portions of their beaks. Their beaks, as a result, are far less bright and less broad, and they also lose the black colouring around their eyes during the winter months.

All that being the case, wintering puffins look pretty different from the colourful creatures we love seeing in Iceland each summer.

Take a puffin tour from Reykjavík harbour, and you might be surprised by how quickly puffins flap their wings. If you can’t count fast enough, it’s a lightning-quick 400 beats per minute. They often fly close to the water’s surface, reaching speeds of up to 88 km/hr.

What’s more, they use those very capable wings to propel themselves under the water. Puffins dive to 60 metres to catch sand eels, which they bring back to their burrow for their mate and puffling.

While they’re fast flyers and deep divers, what puffins are less adept at is landing. If you do take a puffin tour, you’re sure to get a chuckle out of watching them belly flop onto the water or crash into the waves. They’re similarly clumsy on land, which, in addition to their colourful features, earn them the nickname “clowns of the sea.”

When young puffins are nearing the age when they should be able to leave the nest and fend for themselves, puffin parents give them a push by stopping bringing food home for them. Once the hunger sets in, the young puffins leave their burrows with the intention of hitting the sea and diving for fish. Unfortunately, that journey doesn’t always go off without a hitch.

Many young puffins leaving home for the first time on the Westman Islands get distracted by the lights in the nearby village and fly toward them instead of the sea. It’s such a common occurrence that it’s a tradition for the children of the Westman Islands to roam the streets throughout August and September, looking for young puffins who got lost in town. They scoop up the birds and give them a cosy box to spend the night in, finally setting them free when the sun rises the following day.

The International Union for Conservation of Nature (IUCN) categorized the Atlantic Puffin as a vulnerable species in 2018. It is estimated that there are approximately 10,000 pairs nesting in Iceland each year. Still, the population is threatened by climate change, which threatens their food supply, and by hunting, which remains permitted in Iceland.

A vulnerable classification by the IUCN means the Atlantic Puffin is at risk of becoming endangered if the conditions making them vulnerable aren’t improved. Food for thought if you spot puffin on the menu.