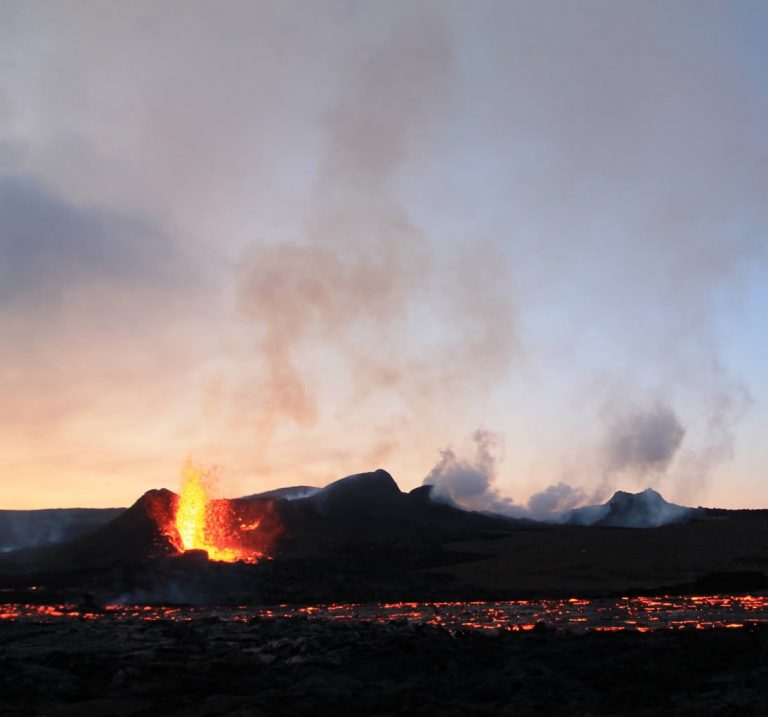 The 1783-4 eruption of Laki was the biggest eruption in recorded history. An estimated 42 billion tonnes of poisonous gases and dust darkened the skies. Haze from the eruption floated east as far away as India, disrupting the monsoon and leading to drought and crop failures. The famine that hit Egypt in 1784, was a result of the eruption and killed roughly one-sixth of its population. While back in Iceland an estimated 20–25% of the population died from famine and over half the livestock was poisoned or killed by giant hailstones. Food shortages contributed to social unrest across Europe and contributed to the French revolution of 1789 and the birth of western democracy.

And in second Place…

Iceland was also the site of the second biggest emission in recorded history: the 2014 eruption of Bárðarbunga. In just 6 months, Bárðarbunga produced enough lava to cover the island of Manhattan – 85km2.

In Jules Verne’s Journey to the centre of the Earth, the heroes climb down a crater on the Snæfellsnes peninsula to find vast oceans filled with extinct prehistoric creatures.
While an encounter with a herd of mastodons is unlikely, a trip to ÞRÍHNÚKAGÍGUR (THRIHNUKAGIGUR) still feels pretty Jules Verne. ÞRÍHNÚKAGÍGUR is the only volcano in the world where you can descend into the magma chamber. Discovered in 1974 and opened to the public in 2012.

Surtsey, Iceland’s most southern point was formed by a volcanic eruption at the bottom of the ocean and emerged from the water on November 14, 1963.
It was immediately granted protection by law, and to this day, only scientists are allowed to go there, and even they have to get special permission. This means that we have been able to monitor how life settles on a brand-new land from the beginning and has, of course, been invaluable to scientists.

Iceland has a third of the world’s fresh lava. ‘Fresh’ is a relative term that may need defining. When discussing Arctic Char, it’s best measured in hours. In geological time fresh lava means lava that’s less than five hundred years old. Iceland’s landscape is full of these ‘Here’s one I prepared earlier’ landscapes offering snapshots of geological time and processes.

Icelandic volcanoes are on the move!

Iceland has a volcanic eruption every 4-5 years

The island has somewhere between 150-200 volcanoes, split into different volcanic systems. About 30 different systems are still considered “active” in Iceland, and 13 of them have erupted since the Viking Settlement in 874. The most recent eruptions were in Fagradalsfjall valley in 2021, which lasted 6 months, and nearby in Meradalir in 2022, which lasted only 3 weeks. These short-lived eruptions were the first on the Reykjanes peninsula in over 700 years!