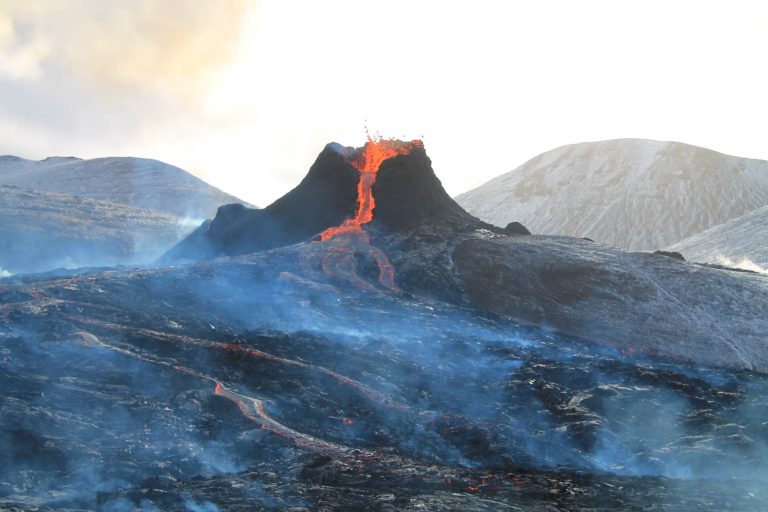 9 Surprising Facts About the Reykjanes Eruption

Do you want to see an active volcano? You can!

On March 19, a volcanic eruption started at Fagradalsfjall volcano on the Reykjanes peninsula, following a period of strong seismic activity, and it is still spewing lava as we speak.

In this article, we will tell you nine surprising facts about the Reykjanes eruption.

1. The Reykjanes eruption is close to Reykjavík and Keflavík International Airport

Fagradalsfjall volcano, the volcano that erupted on the Reykjanes peninsula, lies only around 40km from Reykjavík. It is so close to Reykjavík, it is even visible from the city when the lava reaches high enough. It is also located close to Keflavík International Airport, and you can reach the volcano parking lot in less than 30 minutes driving from the airport. Due to its location close to the Capital Area and the airport, the volcano has become a popular attraction for both locals and visitors alike.

2. It is relatively safe to visit the eruption site

Lava is slow flowing, so it is relatively safe to get close to it. Of course, people should not stand too close to the lava and enjoy the spectacle from a safe distance. Currently, the lava flows pose no threat to residents, as the area is uninhabited. However, in certain conditions, high levels of volcanic gases such as sulphur, carbon dioxide, and carbon monoxide make parts of the area inaccessible. Therefore, always check Safe Travel before you head out.

3. It is the first eruption on the Reykjanes peninsula in a long time

Fragradalsfjall eruption is the first known eruption on the Reykjanes peninsula in almost 800 years. Fagradalsfjall has even been dormant for 6,000 years! Scientists believe the eruption could be the start of a new period of seismic activity on the peninsula which could last for decades, or even one hundred years, with multiple fissures opening all over the peninsula.

4. New vents opened up, and might continue to open up

5. The volcano changed into a lava geyser

On May 2, the eruption pattern changed from a continuous eruption and lava flow to one with periods of inactivity followed by lava fountains. These fountains reach hundreds of metres in height, with the highest one measured at 460 metres. Just like a geyser, these outburst take place at regular intervals.

6. Lava flow increased, which is unusual

Ever since the lava fountains started happening, the lava flow rate went up in, and was doubled since the start of the eruption. This increase in lava flow is not common, as usually lava volume decreases as time passes. Scientists believe the volcano is connected to a deep magma reservoir and that the eruption could continue for quite some time because of this.

Starting May 14, two defensive barriers were created to try to stop lava flowing into the Nátthagi valley, where it could eventually damage fibre-optic cables and the southern coastal the road. On May 22, the lava submerged the eastern rift, and cascaded down to Nátthagi valley. A few days later, lava was flowing over both protective barriers.

8. In 1943, a plane crashed into Fagradalsfjall volcano

On May 3, 1943, B-24 aircraft Hot Stuff had a scheduled refuelling stop in Iceland and crashed into the side of Fagradalsfjall volcano, killing 15 people on board. There was only one survivor, the crew’s rear gunner.

9. The area of the Reykjanes eruption might be a burial site

Geldingadalir, the area where Fagradalsfjall is located, might be the ancient burial site of Ísólfur frá Ísólfsstöðum, an early Norse settler. When Ísólfur was dying, he asked to be buried in the valley where his wethers (castrated rams) roamed, which could be Geldingadalir (which can be translated to Whetherdales). However, an archaeological survey of Geldingadalur after the eruption started provided no evidence of this theory. If he is indeed buried there, it seems his remains will stay there forever.

If you are planning on visiting the eruption site, check out Safe Travel for the latest safety guidelines and www.covid.is for all updates on COVID-19 in Iceland.