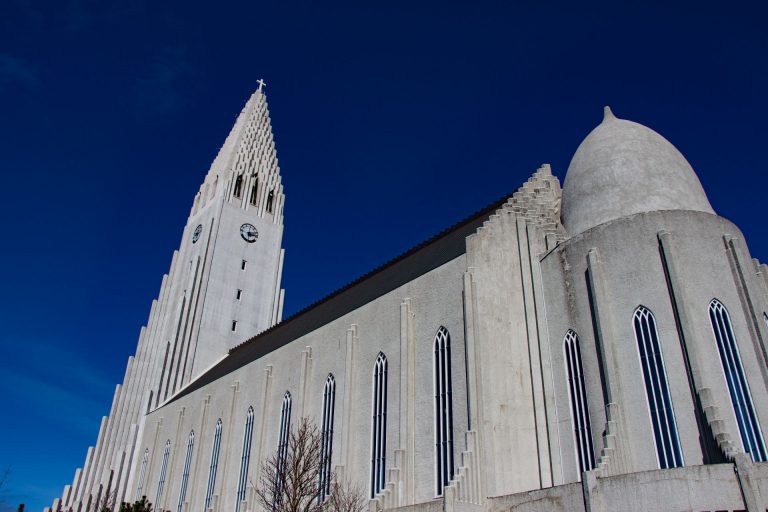 Hallgrímskirkja church is one of Reykjavík’s best-known landmarks and also among the most beautiful churches in Reykjavík. Towering over the city, it’s visible from all corners of Reykjavík. In this article, we list nine surprising facts about Hallgrímskirja.

1. It took 41 years to build Hallgrímskirkja

Hallgrímskirkja is built by State Architect Guðjón Samúelsson (1887-1950). His design of the church was commissioned in 1937. Construction then started in 1945 and was completed in 1986, just in time for the 200-year anniversary of Reykjavík. Different parts of the church were ready earlier. The famous tower, which you can visit, was completed long before, the crypt beneath the choir was consecrated in 1948, and the steeple and wings were finished in 1974.

2. The church is named after Icelandic poet and clergyman Hallgrímur Pétursson

The namesake of the church is Reverend Hallgrímur Pétursson (1614-1674). Hallgrímur Pétursson is Iceland’s most celebrated religious poet. He is known for his Passíusálmar (Passion Hymns), a collection of hymns reflecting the Passion of Christ. His work has been translated into many languages, including Danish, Norwegian, English, German, Dutch, Hungarian, and Italian.

3. The architect who designed Hallgrímskirkja also designed the Church of Akureyri

Guðjón Samúelsson may very well be Iceland’s most influential architect. Not only did he design Hallgrímskirkja, but also Sundhöll Reykjavíkur (swimming pool), the Reykjavík hospital building, Héraðsskólinn school house (in Laugarvatn in South Iceland), Landakotskirkja (the cathedral of the Catholic Church in Iceland), the National Theatre of Iceland, the main building of the University of Iceland, and the Church of Akureyri.

4. The church’s design is based on elements found in Icelandic nature

The architect based his design of the church on elements found in Icelandic nature, like basalt columns, mountains, and glaciers. During construction, the design was criticised for being too old-fashioned and eclectic.

5. The statue in front of the church stood there first

In front of Hallgrímskirkja, you can see a proud statue of Viking explorer Leifur Eiríksson (≈970-1020) by Alexander Stirling Calder (1870-1945). Leifur Eiríksson was the first known European to have set foot on continental North America. This statue was a gift from the United States in 1930 to commemorate the 1000th anniversary of Iceland’s Parliament, which was founded at Þingvellir in 930. The statue was therefore already there before the church was built.

6. Hallgrímskirkja is the largest church in Iceland

Hallgrímskirkja is 74.5m high and it is the largest church in Iceland and among the tallest buildings in the country. Originally, the church was originally meant to be less tall, but the Church of Iceland opted for a larger tower so it would be more impressive than the Catholic Landakotskirkja cathedral.

7. The Hallgrímskirkja Motet Choir is one of the leading choirs in Iceland

The Hallgrímskirkja Motet Choir is founded in 1982 and has been a leading choir in Iceland since. They have a large repertoire including oratorios, passions, requiems, and a cappella sacred music. The choir also performs original Icelandic compositions. They tour all through Europe to perform at festivals and churches.

8. The church bells are controlled with an app

There are three big bells and a carillon of 29 bells in the steeple of the church. The big bells are named Hallgrímur, Guðrún, and Steinunn, after the Reverend Hallgrímur, his wife, and daughter. The church is one of three churches in Reykjavík that chime on the hour, every hour. In 2016, the bells were sent to the Netherlands for repairs. Not only were the bells repaired, but also modernised, and can since be controlled by an app.

9. One of Hallgrímskirkja’s organs has 5,275 pipes

Hallgrímskirkja has two organs, the Klais organ and the chancel organ. The chancel organ is small and located nearest to the altar, it has 10 voices and was inaugurated in 1985. The Klais organ is a large pipe organ built by Johannes Klais Orgelbau, who finished it in 1992. It’s 15m tall, weighs 25 tonnes, and has 5,275 pipes.