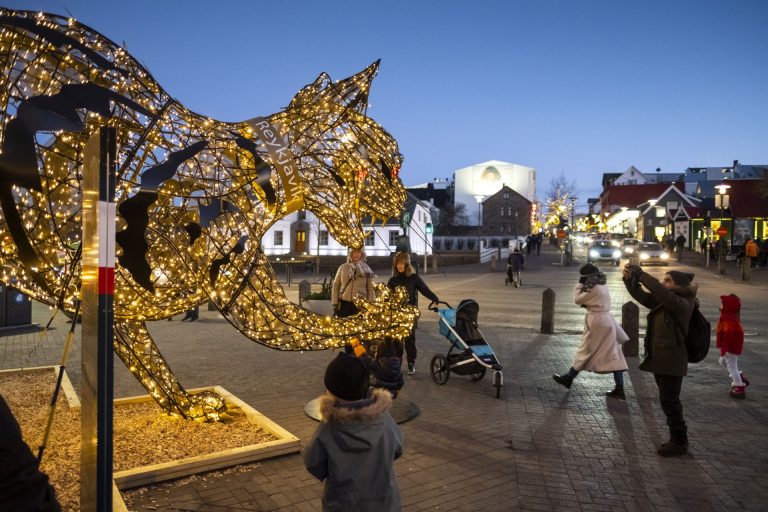 The Icelandic Christmas Cat Wants to Eat You

The Icelandic Christmas Cat, Yule Cat, or Jólakötturinn, is probably Iceland’s most famous cat. It is the pet of child-eating monster Grýla and her husband Leppalúði. They are the parents of the 13 Icelandic Yule Lads.

Story goes that farmers used the Christmas Cat to scare their workers into working harder and finishing processing the wool harvest before Christmas – only the hardest workers would be rewarded with new clothes, and the lazy ones left without new clothes would be the cat’s next victims.

On Laekjartorg square, you can visit an enormous Christmas Cat. The city puts the sculpture up during Advent and Christmas, and it’s the perfect spot for a Christmassy family photo with the lit-up cat (“Look, mom, the cat is going to eat me, haha…”). The sculpture is 5 metres [16ft] tall and 6 metres [19ft] wide and decorated with 6,500 LED lights.

The Christmas Cat was made famous in a 1932 poem by Icelandic poet Jóhannes úr Kötlum. Björk also recorded a popular version of the poem in the late 1980s. You can read a translation of the poem by Thor Ewing below.

You’ve heard about the Yule Cat —

He really was immense;

Nobody knew where he came from,

Nobody knew where he went.

And both were glowing bright;

It was not for the faint-hearted

To face that awful sight.

His whiskers sharp as meat-hooks,

His back was arched up high,

And the claws upon his shaggy paws

Were dreadful to espy.

Sometimes down in the valley,

Sometimes up on the bluff.

Hungry, wild and grim he roamed

Gave everyone the shivers

If you heard a dismal yowl outside

Your luck had just run out;

It was men not mice he hunted —

Of that there was no doubt.

He preyed upon the poor folk

Who got no gifts for Yule,

Who struggled to keep going,

Whose life was hard and cruel.

He took all of their Yuletide food

From the table and the shelf,

He left them not a morsel,

He ate it all himself.

And so the women laboured

With spindle, reel and rock,

To make a little coloured patch

Or just a single sock.

Because he couldn’t come inside

To catch the little ones,

If you had given clothes

To your daughters and your sons.

And when the candles were kindled,

When Yule Night was come,

The children clutched their presents

As the cat outside looked on.

Some shoes or other stuff,

As long as they’d got something,

That would be enough.

Because Kitty couldn’t eat them

If they had new clothes to put on;

And then he would be gone.

Whether he’s about still

But if everyone gets gifts for Yule,

Then all may yet be well.

Perhaps you will remember

To help with gifts yourself;

Perhaps there still are children

Who would get nothing else.

Maybe if you can help those

Who need a little cheer,

It will bring you a Good Yule

And a Happy New Year!