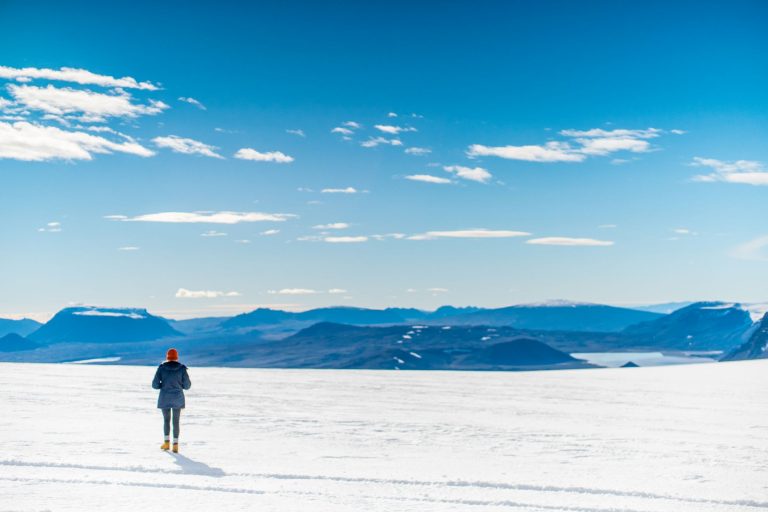 A Friendly Guide to Iceland’s Glaciers

Iceland has been called the Land of Ice and Fire for good reason. But as most of our attention has been focused on the fiery aspect of Iceland’s nature, we thought it would be a good time to (re)introduce you to Iceland’s glaciers, especially because their future is rather uncertain.

We naturally have to start with the biggest glacier, the formidable Vatnajökull glacier. Situated in South East Iceland, this massive ice cap is the second largest in Europe and covers approximately 8% of Iceland’s land area. Beneath the ice cap sits several volcanoes, and the glacier — which is surrounded by many smaller glaciers — overlooks the beautiful Jökulsárlón lagoon. This natural marvel did not actually begin to form until the 1950s, but it has become one of the most popular must-see tourist destinations in Iceland. Several guided tours are available to hike different parts of Vatnajökull glacier.

On the extreme other end of the country, on the westernmost peninsula, sits Snæfellsjökull, one of Iceland’s smallest but perhaps most famous glaciers. It was immortalized in Jules Verne’s 1846 novel, Journey to the Center of the Earth as the entrance to the lost world inside Earth’s hollow center. Like many of Iceland’s glaciers, Snæfellsjökull sits atop an active volcano that last erupted over 1.500 years ago. You might be able to catch a glimpse of the glacier from Reykjavík on a sunny day, but why not go for a visit to see this magical wonder up close? Just a three-hour drive from the capital, Snæfellsjökull glacier offers hiking and even ice climbing for those more experienced climbers.

The second largest glacier in Iceland is Langjökull, translated simply as Long glacier. Although situated in the highlands of central Iceland, Langjökull glacier is extremely accessible and offers numerous tourist attractions, from exploring its man-made ice caves to hiking along the ice cap. It sits parallel to more than one volcano system and is surrounded by lava fields, though the area is not nearly as volcanically active as some other parts of the island. It is, however, extremely old, and the eastern part of Langjökull glacier sits in a lava field formed over 7.000 years ago!

Just north-west of Langjökull glacier is Eiríksjökull, a 1.675m high glacier, making it one of the tallest mountains in Western Iceland. It sits just out of reach of the highlands and is technically situated in the Borgarfjörður district. Like Langjökull, Eiríksjökull glacier is surrounded by lava fields. And close by is Iceland’s longest lava cave, Surtshellir. Eiríksjökull contains steep screes that are challenging and dangerous, so hiking is not recommended. But there are still some exciting tours that allow you to safely enjoy the glacier.

A stone’s throw from Eyjafjallajökull sits its sister glacier, Mýrdalsjökull. The fourth largest ice cap in Iceland, this glacier sits atop one of the most famous volcanoes in the country: Katla, which has erupted on average once every fifty years since AD 930. Thankfully no activity has been recording in the area in recent years, so tourists are able to enjoy a thrilling snowmobile ride across its surface or take a guided tour into one of its ice caves.

Almost in the direct center of the island sits Hofsjökull, the third largest glacier in Iceland, which sits snuggly between Vatnajökull and Langjökull glaciers. Covering around 925km2, Hofsjökull glacier serves as the source of Iceland’s longest river, Þjórsá. The glacier also houses Iceland’s largest subglacial caldera volcano. Due to its location in the highlands, Hofsjökull glacier is slightly less accessible than its more popular and famous neighbours.

Iceland’s northern-most glacier rests in the uninhabited nature preserve Hornstrandir on the northern tip of the West Fjords. It is one of the smaller glaciers on the island, featuring a very low altitude and covering only 200km2. Interestingly, Drangajökull glacier sits just outside of the reach of the Gulf Stream air currents, which keeps Reykjavík’s temperatures rather mild. This is perhaps one of the reasons that this glacier, unlike the majority of Iceland’s other glaciers, is not thinning but rather growing.

There are several smaller glaciers that dot the south coast, highlands and even one in the east. These glaciers are still natural wonders but receive far less attention than their larger neighbours and therefore receive fewer visits from tourists. Tindfjallajökull and Torfajökull glaciers sit just north of Eyjafjallajökull and Mýrdalsjökull, respectively. Both glaciers cover stratovolcanoes. Further north in the highlands, sitting between Vatnajökull and Hofsjökull glaciers is the small glacier Tungnafellsjökull. It, too, sits on a volcano. Although small in area size, it is 1.535m high. The only glacier east of Vatnajökull is Þrándarjökull, a relatively small glacier that sits nearby Djúpivogur in the East Fjords. Finally, Þórisjökull is a sort of introductory glacier on the way to Langjökull. It was most likely a part of Langjökull glacier until around the 18th century. It now sits to the south-west and is perhaps the glacier next in line to go extinct.

The Sobering Lesson of Ok Glacier

Okjökull glacier was situated near Langjökull, but its volume began to rapidly decline in the twenty-first century. In 2014, the glacier was officially declared dead. A plaque sits nearby the mountain Ok once topped that reads:

Ok is the first Icelandic glacier to lose its status as a glacier.

In the next 200 years all our glaciers are expected to follow the same path.

This monument is to acknowledge that we know

what is happening and what needs to be done.

Only you know if we did it.

Ok is suspected to be the first of many glacier casualties in Iceland due to the climate crisis the world is currently facing. Because of the danger posed to Iceland’s remaining glaciers, it is essential that traveling to and enjoying them is done with the utmost respect and caution. Be sure to read up on sustainable travel tips and follow all the guidelines to help us preserve our beloved glaciers!