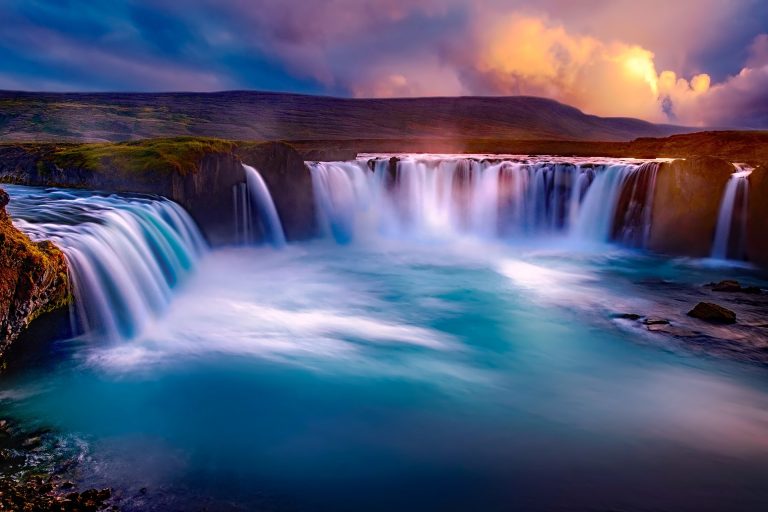 Everything You Need to Know About the Diamond Circle

You have probably heard of the Golden Circle, but have you heard of the Diamond Circle? Chances are, you have not.

The Diamond Circle is a day tour in North Iceland, with five primary stops. The tour usually starts in Akureyri, the capital of the north. You will then head to Goðafoss waterfall, Mývatn lake, Dettifoss waterfall, Ásbyrgi canyon and the town Húsavík. With these stops, the Diamond Circle covers 265 km, and if you want to drive back to Akureyri afterwards, it is 360 km.

If you are planning a self-drive tour, please make sure you book a 4WD vehicle, as the road between Dettifoss and Ásbyrgi is a rough gravel road. Only drive on this road if you’re an experienced driver.

In this article, we will tell you in more detail about the Diamond Circle. 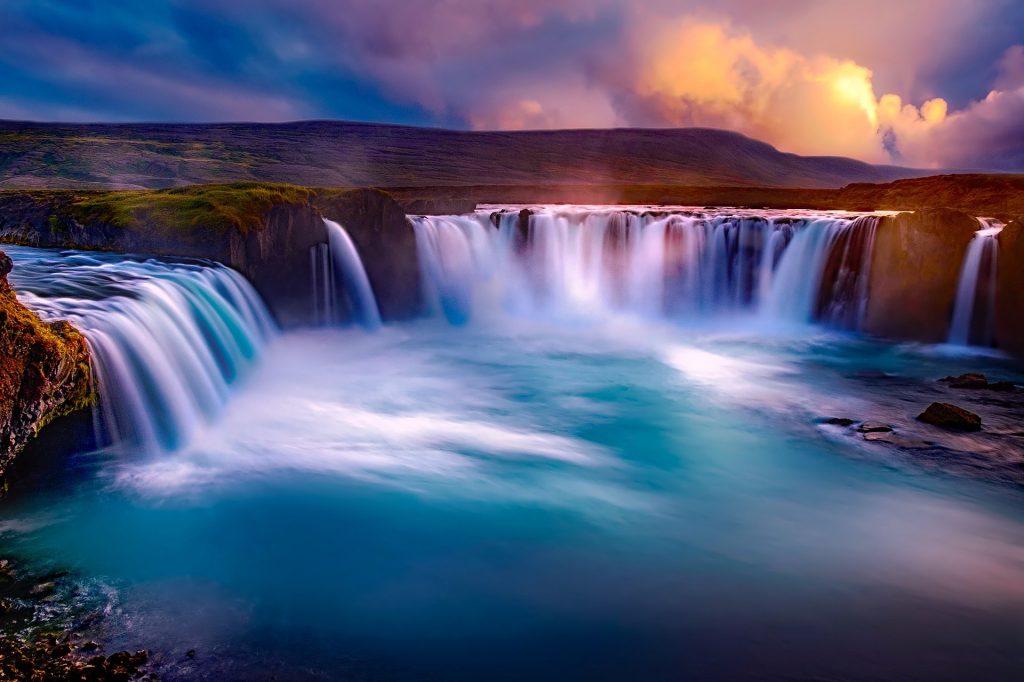 The first stop on the Diamond Circle is a forty-five-minute drive east of Akureyri: the majestic Goðafoss waterfall (the name literally translates to Waterfall of the Pagan Gods), which has a height of 12 m and a width of 30 m.

Around 1,000 AD, Iceland’s legislative assembly debated whether to continue to practice Norse paganism or accept Christianity as the official religion. Lawspeaker Þorgeir Ljósvetningagoði Þorkelsson, who was a pagan priest, decided that the Icelandic people should become Christian; however, pagans could still worship the old gods in private, and several old customs were still acceptable. To put his money where his mouth was, Þorgier threw all his pagan idols into a waterfall, which has been known as Goðafoss since then. 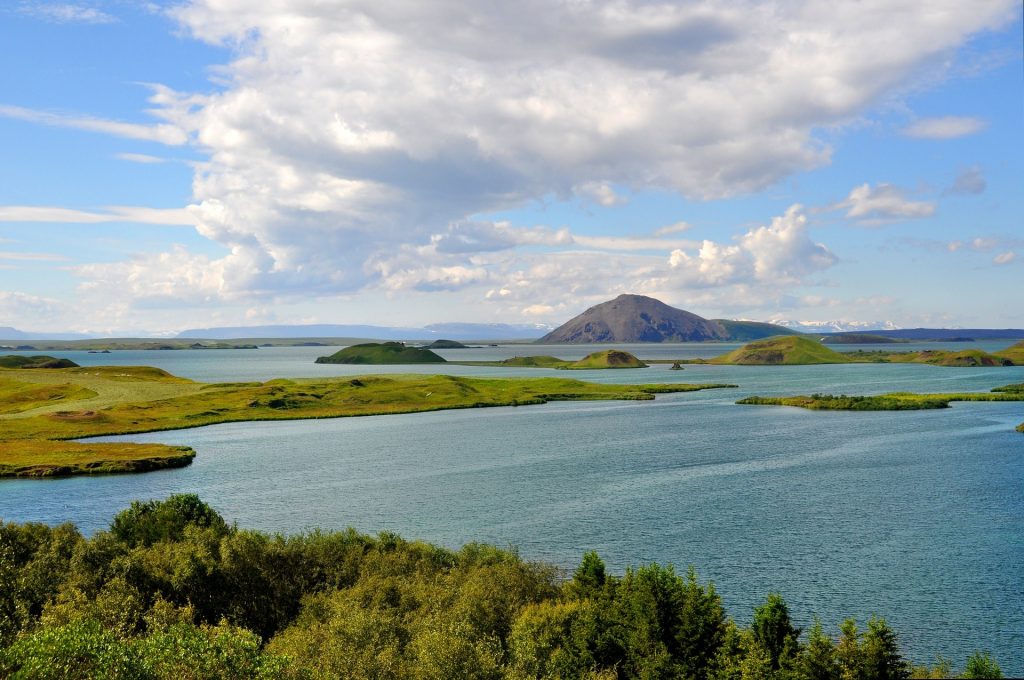 Continuing east, Mývatn lake is about a 40-minute drive from Goðafoss. This area contains one of the most unique landscapes in Iceland. Pseudocraters – that is, volcano craters that are not connected to any magma system – surround the lake. Pseudocraters are found in only a few locations on earth, though some seem to exist on Mars! They were formed thousands of years ago when hot lava from a volcanic eruption crossed over water from the lake, and gases explode through the water and lava, throwing debris up in the air which then settles into a form of a crater. But the lake is home to more than just out-of-this-world landscapes: in the summertime, Mývatn hosts over 70 bird species, with 14 of the 16 duck species that nest in Iceland living temporarily on the lake.

Just east of Mývatn are two other incredible places that also make you feel like you are on another planet. Dimmuborgir is a stunning lava field that features towering rock formations in all kinds of strange and interesting shapes and sizes. A bit farther east, Mt. Námafjall towers proudly over geothermal area Námaskarð. There, you can walk past sulphurous mud pools, hot springs and steaming fumaroles

Want to explore this area more? Then try out the Lake Mývatn Classic tour. 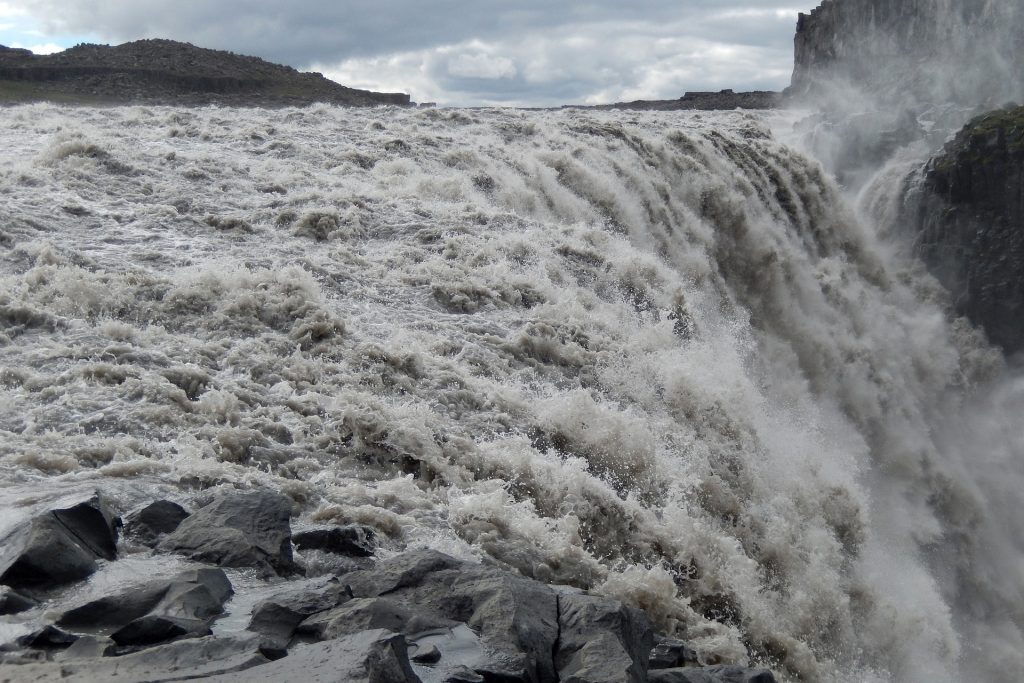 The next stop on the Diamond Circle is Dettifoss waterfall, which is about an hour-and-a-half drive northeast from Mývatn Lake.

Dettifoss is the most powerful waterfall in Europe, with a total height of 44 m and a width of 100 m. You can get pretty close to the waterfall for an amazing view, but make sure you are wearing waterproof clothing if you do.

Don’t feel like driving? Then book one of these private tours to Dettifoss. 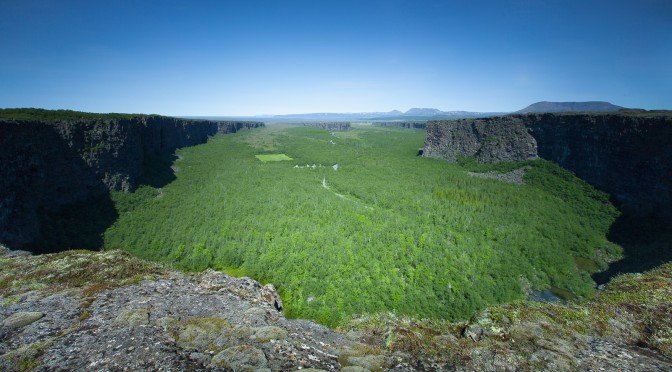 The wondrous Ásbyrgi canyon is 30 km north of Dettifoss waterfall. This horseshoe-shaped canyon is said to have been created when Sleipnir, Óðinn’s 8-legged steed, stepped onto the land.

Lush birch trees and green grass are surrounded by 100 m tall cliff walls. There are many hiking options in the area (from short hikes to day hikes), and you can also visit an information centre.

Please note that the road between Dettifoss and Ásbyrgi, road no. 864, is a bumpy and dusty gravel road that should not be driven without a 4WD vehicle. It’s not a road for inexperienced drivers, and you should only go there if you are a confident driver, have the appropriate car and bring spare parts. 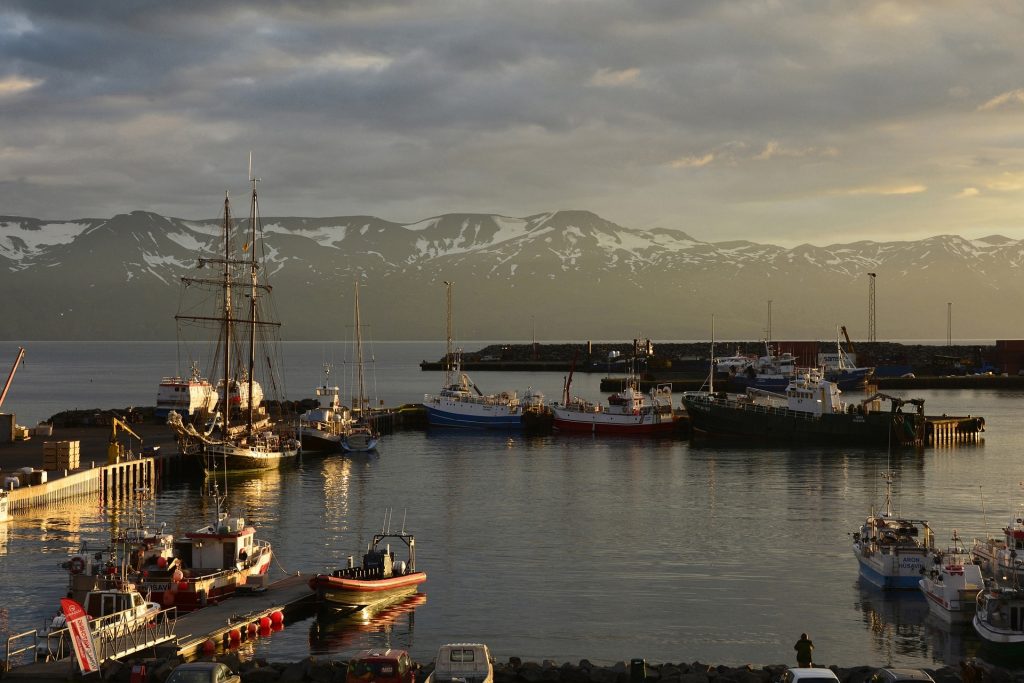 A short 45-minute drive west will take you to the last stop on the Diamond Circle: Húsavík.

Known as the whale-watching capital of Iceland, Húsavík offers the best chance to see some of Iceland’s many cetaceans. In the surrounding Skjálfandi bay, you can find humpback whales, blue whales, minke whales, pilot whales and sperm whale. Because of the deep waters in the bay, there is also a higher chance of seeing rare species like the basking shark, the northern bottlenose whale and the beluga.