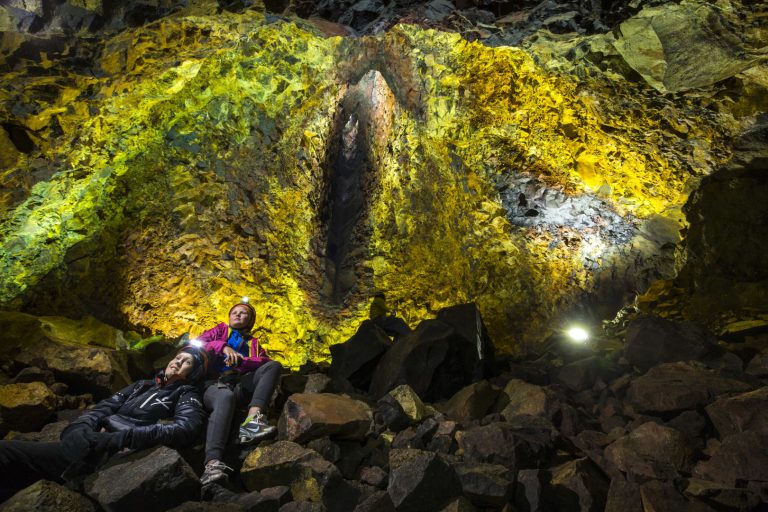 Iceland is a rocky, mountainous island and only a small portion of the island’s surface has been tamed by humans. The mountains that dominate most of the country create the circumstances for a lot of natural wonders, such as glaciers and waterfalls, but also, caves.

Caving in Iceland is a fun activity and the sheer amount of caves in Iceland means that both novices and experienced cavers can find caves suitable to their ability for all their spelunking cravings.

***We don’t recommend trying to explore these caves without the proper equipment, experience and guides.*** 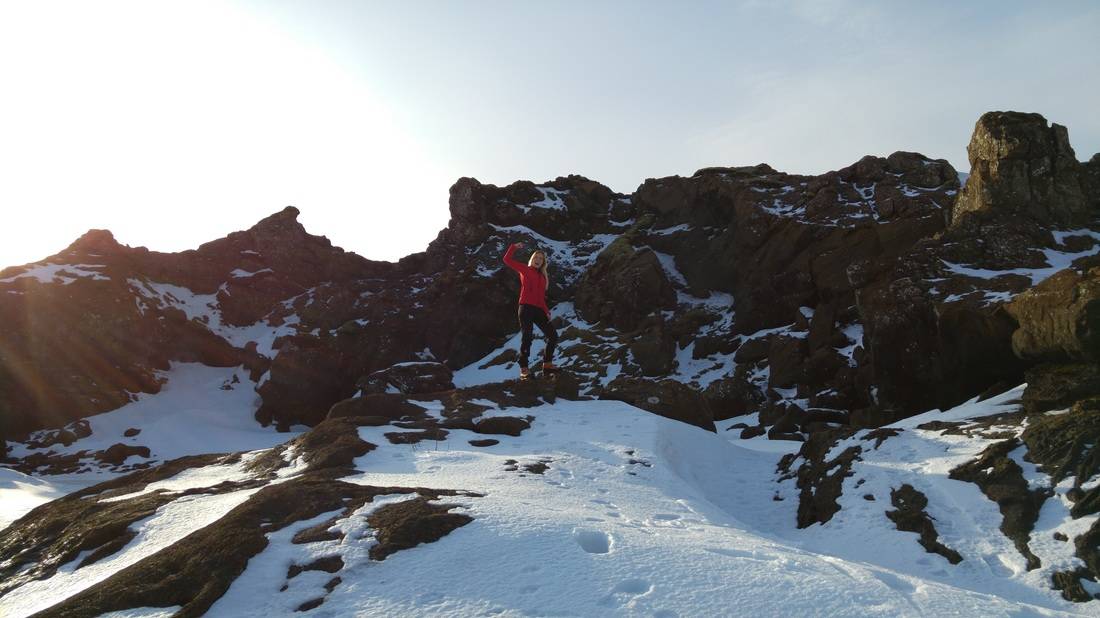 Iceland is one of the  most volcanic places on earth – in fact, 99% of the island is volcanic rock. When a lava stream runs from a volcano, the first part to cool down and harden is the outermost layer, which can form a crust around the liquid lava underneath. Then if the volcano stops erupting, sometimes the lava will continue running, until you’re left with an empty crust of lava, known as a lava cave.

From the roughly FIVE HUNDRED lava caves we’ve discovered already, we can estimate that Iceland has about TEN THOUSAND caves in total. Some are better, more beautiful and more approachable than others, of course, so here are a few of our favourite caves and caving tours.

This caving tour usually takes you to the famous Leiðarendi cave. You can also drive up and take a guided tour of the Víðgelmir cave, the largest in Iceland by volume, or see it on a guided day tour of western Iceland.

I can safely say that has been one of my favourite activities (if not most), I’ve done since in Iceland, so if possible, try this! Often snowmobiling can be combined with seeing some landmarks, relaxation and/or another activity, making it a great way to experience Iceland in multiple ways on the same day.

Personal fave recommendation: It’s great to go snowmobiling in the morning and go to a hot thermal pool afterwards (say, Secret Lagoon, the Blue Lagoon or Reykjadalur natural hot spring). There’s a reason Iceland is called the land of fire and ice. What better way than to experience it yourself? 🙂 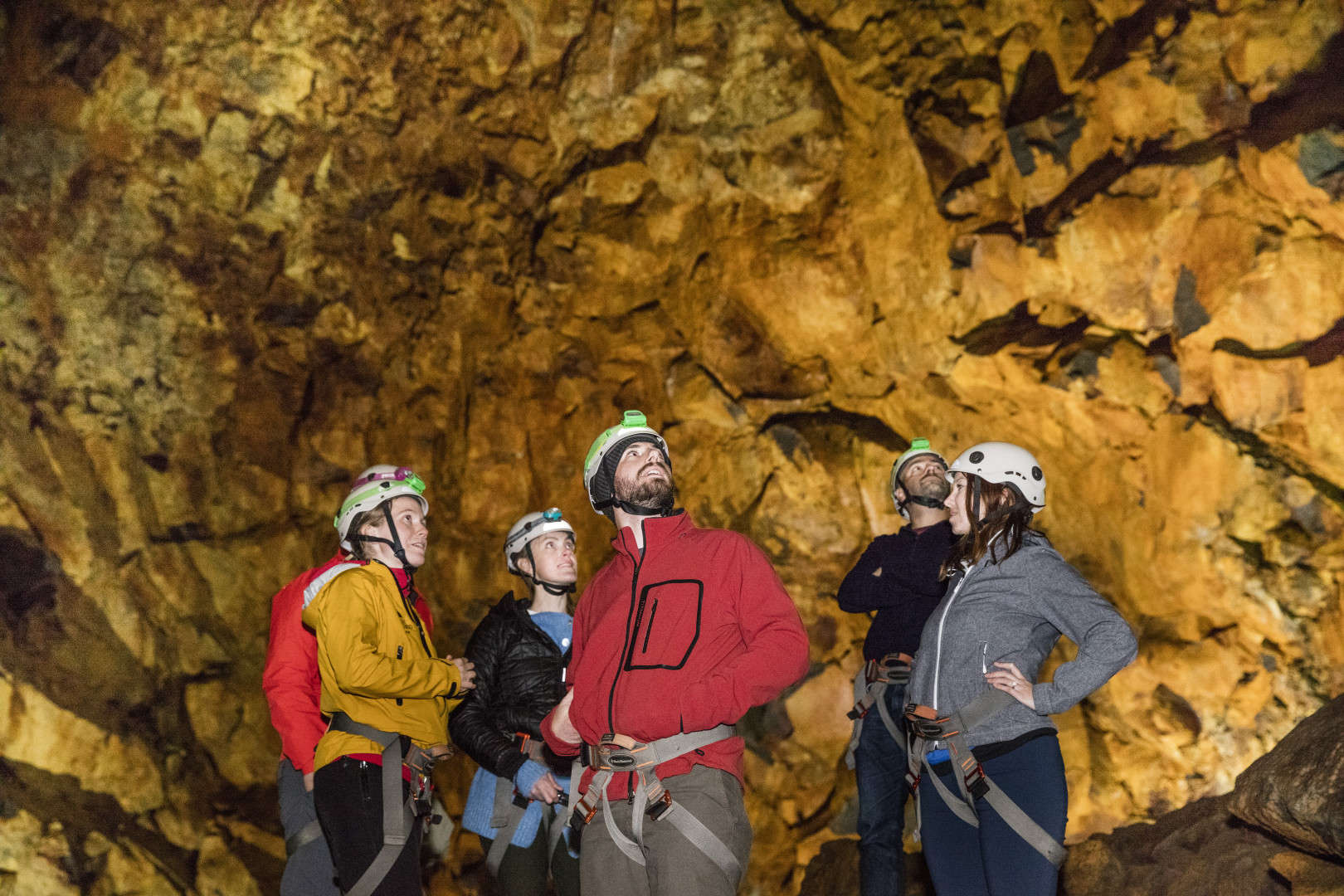 FIRE – Inside the Volcano’s Dormant Inferno

Technically all the lava caves in Iceland are from “burning” volcanic sources, but this is the only place on earth where you can descend into the vacant magma chamber of an actual volcano. The empty crater is enormous, taller than the Statue of Liberty, and the walls are rocks in all the colours of the rainbow.

The day tour includes a ride to the Blue Mountains in southern Iceland, a short hike across a heath and then puts you on an elevator into the belly of the Þríhnúkagígur mountain.

And don’t worry, there’s no actual fire there anymore, the mountain hasn’t erupted for over four thousand years and isn’t projected to do so again for the foreseeable future. 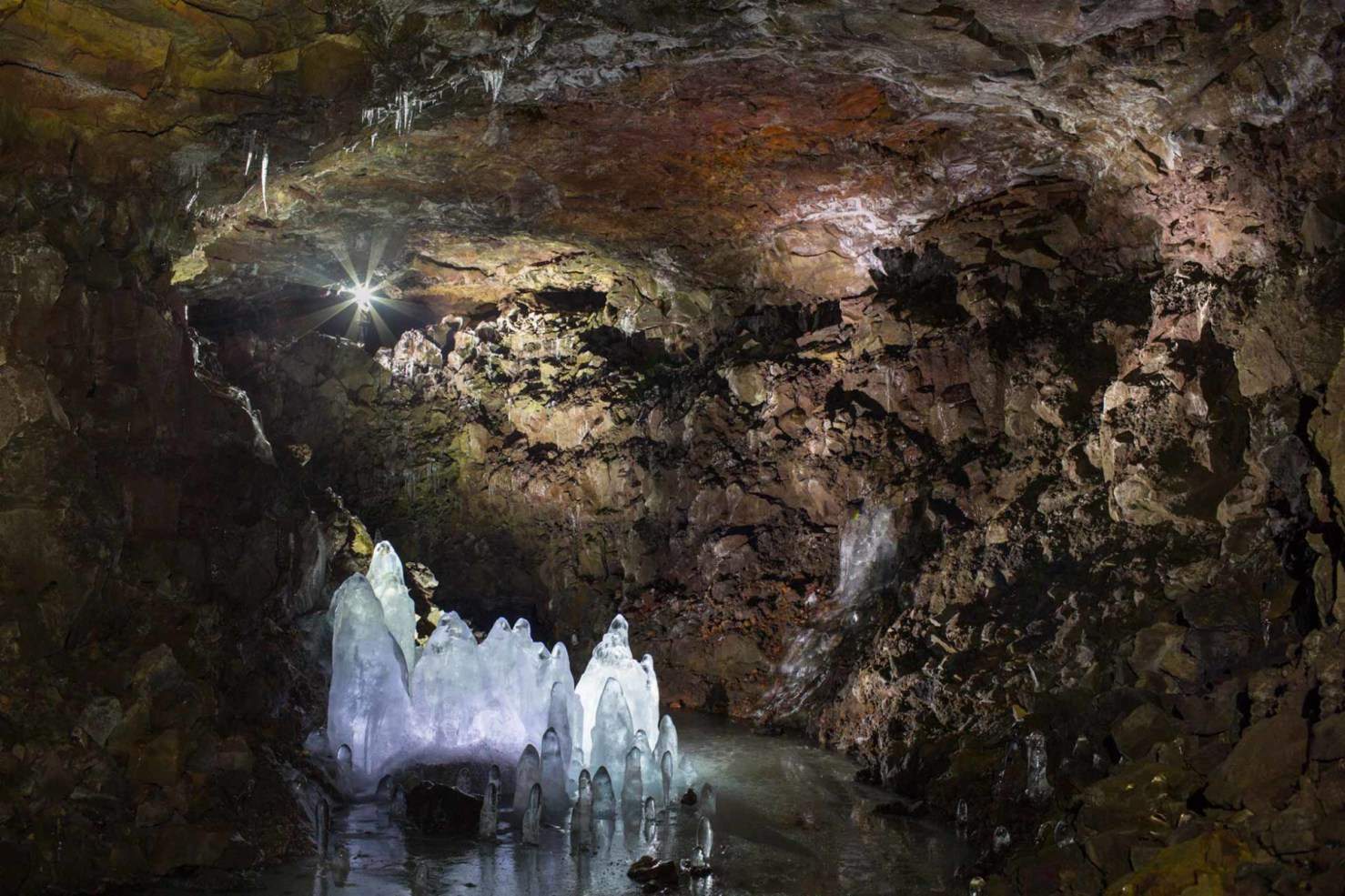 Lofthellir is a cave in northern Iceland, whose name means “air-cave.” The name comes from the constant draught streaming through the cave, which is what creates Lofthellir’s unique ice sculptures.

Aside from being a beautiful cave in a beautiful setting, Lofthellir is unusual in that its temperature is always below freezing, and so it is constantly creating ice, like a refrigerator, often making very impressive stalactites and stalagmites of ice.

This cave can be seen on a guided tour from Akureyri or Mývatn. 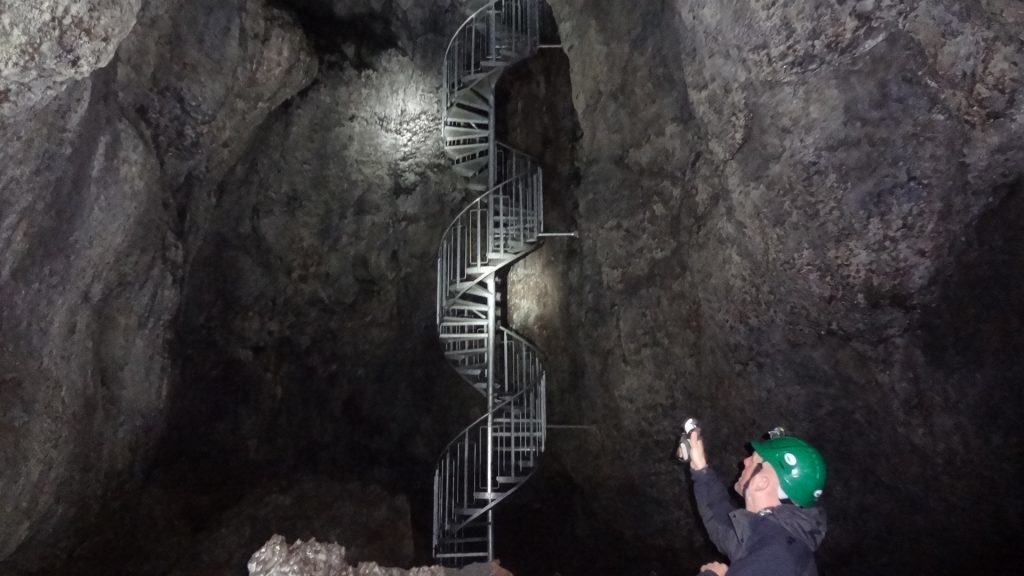 On the tip of the western peninsula of Snæfellsnes, you will find Vatnshellir, or “Water-cave,” so named because back in the day local farmers would get water from a small well here. This impressive cave is 200 metres long and 35 metres deep, and within it, you can see different kinds of lava which are formed during the different stages of a volcanic eruption.

You can see it by self-drive or on a guided tour of Snæfellsnes. 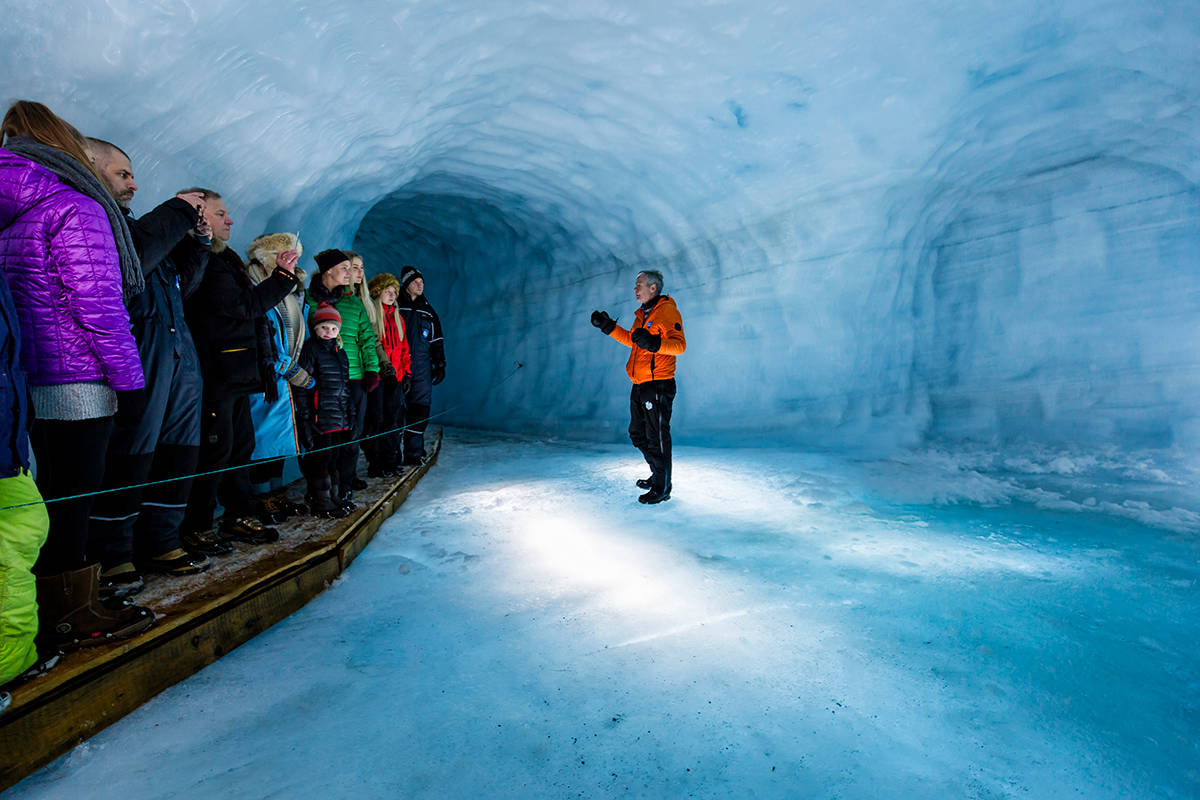 Lofthellir is a cave with ice in it but Iceland also has some ice caves made of ice! In the winter we find natural ice caves in the glaciers of eastern Iceland. These can be hiked to with the right equipment, expertise and guidance.

Finally, in western Iceland, you can visit the longest man-made ice tunnel in the world, the Into the Glacier experience in Langjökull. You approach this 500-metre ice tunnel with a specially modified old rocket-launcher truck which is outfitted to drive over the glacier. You then get a guided tour of the glacier and look into both natural fissures and man-made rooms, while gaining a deeper understanding of this natural phenomena.