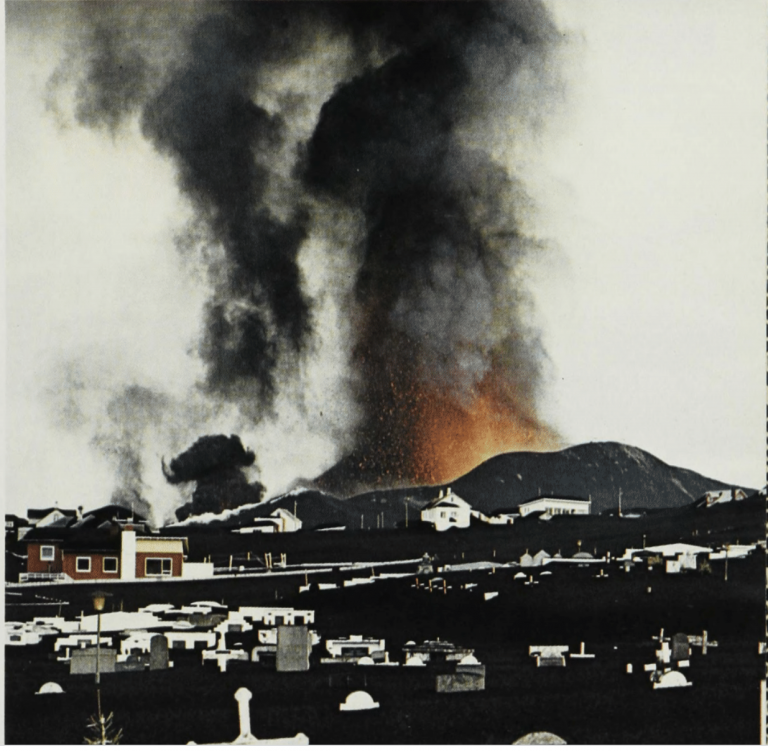 Fifty years ago, Iceland experienced one of the most dramatic volcanic eruptions, a mass evacuation, and a race to save a fishing village. Looking back, it is a story of near disaster, resiliency, and determination. Let’s look back at the Eldfell eruption and its lasting legacy on the Westman Islands

The Night of the Volcano

The sleepy fishing village on the island of Heimaey – the largest of the Westman Islands off the South Coast of mainland Iceland – was built on the lower slopes of Helgafell mountain, a supposedly extinct volcano. The nearly 5,000 inhabitants awoke around 2 AM on the morning of January 23, 1973, to a thunderous roar. Helgafell had woken up.

A fissure a mile-and-a-half long had opened up about half a mile from the edge of the Heimaey township. Red hot lava flew into the air in the early morning and spewed ash down upon the village that was now in a flurry of activity. Miraculously, the islanders evacuated their village in a matter of hours. The sick and elderly left from the local airstrip, while most of the population were ferried to the mainland on about 70 of their own fishing boats. Some stayed behind – officials and firefighters and those manning the small airport and rescuers doubling back to make sure no one had been forgotten.

No one, thankfully, was hurt by the eruption or the evacuation. But as the days stretched into weeks, the volcano destroyed parts of the village. It threw chunks of lava into the neighbourhoods, igniting family homes that burned for days. In other parts of the village, the wind stacked up the ash so high, only the tops of the roofs of some houses could be seen. And the villagers waited and waited for a chance to return to their island. One elderly woman at age 92 had never been off the island. When, she wondered, would she be able to go back? 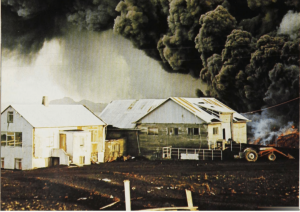 As lava from the volcano began to flow in earnest towards the town‘s harbour, the geologists and scientists that had either stayed or sailed to Heimaey had to come up with a plan. This was a fishing community, after all, and if the harbour was destroyed, the people would have nothing to return to.

The idea was Thorbjörn Sigurgeirsson’s, proving it’s always handy to have a theoretical physicist hanging about.  A former colleague of Niles Bohr, Thorbjörn suggested that dredging pumps and hoses could slow the progress of the lava. The island’s defenders began pumping ice-cold sea water at the leading edge of the lava flow advancing towards the harbour.

Pumping equipment was brought in from the mainland and abroad, and soon a massive cooling operation was underway. ‘Suicide squads’ worked tirelessly dragging pipes and hoses across smoking lava fields into position. Over four months 8 million cubic yards of seawater was pumped onto the lava. By the time the eruption had subsided, a ninety-foot rock tsunami stood frozen, just yards from the harbour. There was so much seawater sprayed on the lava that it was estimated that 220,000 tonnes of salt were left behind. 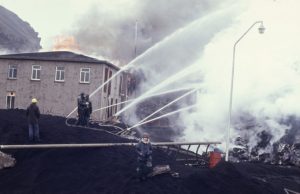 The volcano – subsequently named Eldfell, or Fire Mountain – remained active for nearly six months. In July 1973, it was announced that the eruption was finally over. While the harbour had been saved, the eastern side of the town was buried under 40 meters (120 feet) of lava, with a total of 112 houses destroyed, either burned or buried entirely.

For nearly six months, the islanders had lived with relatives, friends or strangers on the mainland, cramped and uncomfortable. As soon as it was deemed safe to return, they began filtering back to their hometown, only to find half of it in complete ruin. And they began the long process of rebuilding.

The first order of business was to clean up the wreckage, ash and rock. The next step was to get back to the sea. By the end of 1974, fishing companies were back up to their pre-eruption numbers. By 1975, about 85% of the population had returned to the Westman Islands. Some houses were beyond saving and remain buried or in ruins. One was made into a museum about the eruption. You can see the house that had been evacuated with almost no notice.

But Icelanders – and particularly the hardy Westman islanders – were not about to let a volcano get the better of them. The villagers used the eruption to their advantage. Scientists quickly began experimenting with harnessing the geothermal heat from the eruption to heat homes and buildings on the island. In 1974, the first house was geothermally heated using the eruption aftermath, and by 1979, several plants were being constructed to geothermally heat the homes of Heimaey and the Westman Islands. The eruption also created new chunks of land. Without missing a beat, the islanders used it to extend their airport runways. 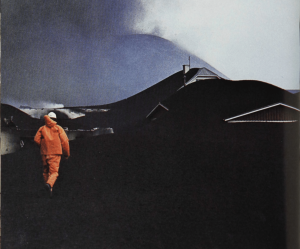 As far as natural disasters go, the Eldfell eruption was pretty minor. There were no deaths, and in about 5 years, life on Heimaey and in the Westman Islands was more or less back to normal. But in the last 50 years, this island community has grown beyond just a fishing village with a fiery past.

Tourism to the islands has been steady. While the volcano and its museum certainly fascinate visitors, the main attraction is arguably its wildlife. The islands are home to about 8 million puffins during the summer months. More recently, Heimaey has opened a sea sanctuary to house two rescued beluga whales. Although belugas sometimes come into Icelandic waters, they are notoriously difficult to spot. These young whales – Little Grey and Little White – have been living in the sanctuary since 2020. Visitors are welcome, although the sanctuary is only open for 4 hours each weekday.

In the last decade, however, it has not been Heimaey‘s wildlife that has gained the attention of the rest of Iceland and indeed the international community but rather its food and drink. Celebrated chef Gísli Matthías Auðunsson runs Slippurinn, a hugely popular restaurant known not only for its tasty menu but more importantly for its use of local ingredients. Gísli tries to use herbs and plants that grow there on Heimaey. A local microbrewery, Brothers Brewery, has also become a favourite for Icelanders. While they produce some great sours, stouts and IPAs, one of their signature beers is an Amber Ale – named Eldfell.

Icelanders look back on the 1973 eruption with a mixture of fear and pride. It was a close call, but it was handled brilliantly and bravely. More than anything, the experienced underlined some of the most Icelandic traits – perseverance in the face of hardship, toughness, and their rocky relationship with an unpredictable and sometimes violent landscape.