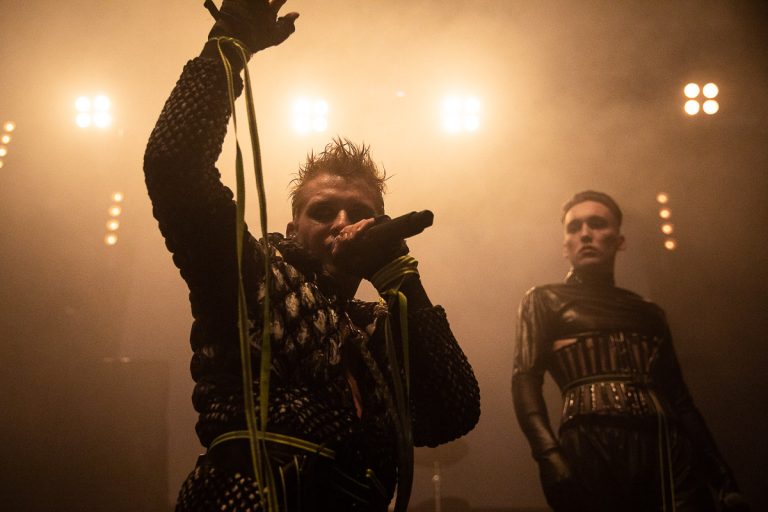 Every Friday, the glorious green-lit word ‘Ja’ appears when I open my browser. Ja is the answer to the question ‘Er det fredag?’, the Danish version of ‘Is it Friday?’ Yes, it is. There’s a reason Fridays are so loved, and that feeling could be felt in the air on the Friday night at Iceland Airwaves. It was a blast.

First stop was Anna of the North in the Reykjavík Art Museum. A decent crowd had gathered here. Are there always people here, no matter what? Did they stay here overnight? One thing’s for sure, they were here to get the party started. My night started as far away from the party as possible, as I napped for two hours after dinner. We can’t let that ruin the night though, and I came out on the other side as energetic as ever.

Is Anna of the North ‘festival pop’? It’s very curated and finetuned. The melodies play very nicely off her voice. But I’m looking for some extra kick to start off the night. I caught 20 minutes of her, and I tell myself it’s alright to be fickle at a music festival.

Time for a completely different tune as I caught the Finnish Detalji at Hard Rock Café. Damn! The bass is absolutely thumping when I step inside, the stage covered in dark visuals – the only thing I can make out of it is a burning subterranean tunnel. Dressed in all black, Detalji was going at it with beats which were somewhere in between a hellish landscape and club music. Club music is hell for some people. There are elements in her music which sounds like Kraftwerk if they were from East Germany and didn’t have a cosy middle class upbringing. The crowd got really into it as the show gained momentum – her take on IDM getting a grip on the folks in front. Her hair looks quite like the hair of the girl in the well in the Ring. I think of the Floridian family in the Hard Rock restaurant above, ordering a strawberry milkshake, oblivious to the mayhem taking place two floors below them. Detalji says nothing, letting her music do the talking, even walking off the stage without a word. Impressive.

Onto some Icelandic music as Mammút await in the Reykjavík Art Museum. This was one of the most anticipated shows at this year’s Iceland Airwaves and a huge line has formed outside. Let’s jump to a scene from the priority line:

Woman 1: “Who’s playing right now?” Woman 2: “Oooh, I have no idea”. Woman 1: “I wish I was in the long queue. That’s where the real fun is.” Woman 2: “I’m just happy that I got a good parking spot.” I wonder how these women would have fared at the Detalji concert.

Anyways, Mammút begin to a raucous ovation, singer Katrína Mogensen stepping on stage heavily pregnant. It makes no matter as she hits the stage with vigour, her voice never failing to impress. This is quality rock, and the crowd are into it. A special shout out to the light man as well, as the show featured a very nice installation which added to the spectacle. You can feel the synergy in the band, as they’ve been playing together for long. The two girls playing bass and guitar, Alexandra and Vilborg, have a new challenger when it comes to hair length in guitarist Arnar – all of them sporting long locks. We’ll at least call it a draw.

It’s always a bit of fun to take a look around at your fellow festival goers. Some very powerful French kissing in front of me didn’t distract me too much from the spectacle on stage, it only added to it. To the left of me, an Icelandic bloke is fuming as three blonde girls had stepped on him on their way to the bar. They laugh it off. Good times. One of our fellow festival goers decided to for the classic resting-on-your-partner’s-shoulders thing. Always a classic. Fun for the guy on top, but bad for the 200 or so people behind them. But I’m just nitpicking at this point. It was all in good fun, as he jumps down after one song. Loosen up, it’s a festival after all, goddamnit.

I left the art museum to head back to Hard Rock Café as I was excited to see Ukrainan rapper Alyona Alyona. She didn’t fail to impress, proving that even if you don’t understand the lyrics, emotion and flow is universal. Now, this is stage presence. She’s a don, dressed in a black and gold silk Japanese gown, gold chain hanging from her neck. The outfit reminds me of Rakim – the Ukrainian Rakim?  UkRakim? It’s a stretch, but her flow is more in your face than Rakim’s languid flow, and she’s got plenty of it. The DJ’s name is DJ Expert – I love it. And, of course, her hypewoman has a bucket hat. “So I want you – are you ready to dance?!”, Alyona said in the thickest Ukrainian accent I’ve ever heard. And dance, the people did. Her song Рибки 3 (Fishes 3) especially got the crowd going. A good show all around.

“I love going to live shows wherever I am in the world. So often I hear music which is so nice but the lyrics are heavily misogynistic. It’s so unfair we have to turn up to our own oppression. I’m not telling others how to make their music, but I’m providing an alternative.”

We stay at Hard Rock for Madame Gandhi’s performance. It’s worth a mention that one of the bartender’s had one of the weirdest haircuts I’ve ever seen. It was like Guy Fieri meets a reversed Batman logo. The show itself started with one of the best pronunciation’s of Reykjavík I’ve heard from a foreigner’s mouth. Madame Gandhi’s performance was powerful, with female empowerment at the forefront. Her voice is so clear, you can hear every single word. It’s almost a poetry slam performance, draped with lots of hard-hitting trap beats. The thing is, her lyrics matter immensely to her as each song carriers a powerful message.  The beat in Topknot Turnup especially got me. Each song was introed with a message, and Madame Gandhi even gave Icelandic DJ Sigrún Skafta the chance to raise the issue of the deportation of a pregnant Albanian woman. The show was a truly global act, featuring Caribbean steel drums, English lyrics, international crowd, Indian menstruation social issues, and on, and on. You could feel that the crowd took it all in like a sponge and that the message meant a whole lot for many in the audience.

I needed to break out from the Art Museum – Hard Rock switcheroo I had going on, and I found the perfect answer at Murkage Dave’s show. I stepped in and saw a shaved head, massive beard, smooth voice and an incredibly confident performer. A show full of feeling, Murkage got a lot of love from the crowd as he went back and forth with garage and R’n’b bangers.

“Nice to see a couple of the garage crew here!”, after a sing-along broke out to one his garage tunes. The show took a soulful turn after that. “I really enjoy singing so much. I’m not young (laughs). I never thought I would be doing this. But I’m in Iceland. Man, I’m from London. So, I’m really grateful for you being here.”

Hressingarskálinn is a nice venue, very tight and compact. It’s quite peculiar that the toilets are to each side of the stage but hey, you work with what you got, right? And often, the smaller venues provide the best vibes. Such was the case tonight for Murkage, as he received one of the most raucous and longest ovations I’d seen at the festival. His last song, ‘Keep Up the Bad Work’, with a sample of the Clipse’s ‘Grindin”, got the crowd going in the end. “If the man that I was, met the man who I am” was a true earworm. Bottom line, Murkage put on a fantastic show. Go see him if you ever get the chance.

I grabbed him for quick chat after the show. “It was an honour to perform here in front of this crowd, and I really felt the love from them. It’s my first time in Iceland and I’m just trying to soak it all in and enjoy it.” When asked about his age, mentioned by himself earlier, he laughed it off. “He’s trying to get the exclusive!”. Cheers for that Murkage, as I head off to industrial techno magnates Booka Shade.

On my way there I see the Arnar from hip hop band Úlfur Úlfur posing in front of jacked up car, the vehicle waiting to get its tire switched. Gangsta. The crowd at the art museum had cleared out following Hatari’s performance so I was met with a wasteland of sorts, filled only with Heineken cans and techno heads. Hatari were surely amazing, but I’ve enjoyed them before – and I know the crowd at the art museum did too this time around. Regarding Booka Shade, I get it. They’ve performed multiple times in Iceland, and their set was one and a half hours long, allowing folks to get to enjoy other artists and come back to the show. The art museum slowly filled up as they went through their repertoire. Bass banging, heads swinging, kaleidoscope visuals up on stage. Damn, it sounded good and the steady thump won the crowd over.

It’s time to call it a night. Friday night was a blast, with music coming at me from all directions. The wide spectrum of Airwaves is where the magic is. I saw two 40-year-old women wearing fur coats, clueless to which show they were heading to, right after witnessing a group of 20 year olds headbanging to Finnish experimental techno. Small venues, big venues. Good music, good vibes, good night.

What’s On in Iceland is covering Iceland Airwaves. Follow this site for further recaps, as well as following our Instagram for on-the-go stories. 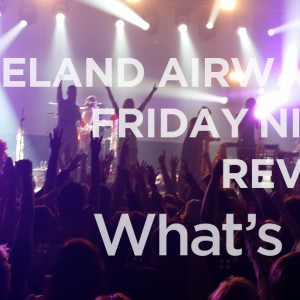 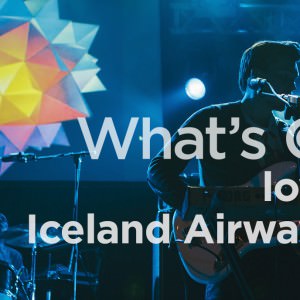 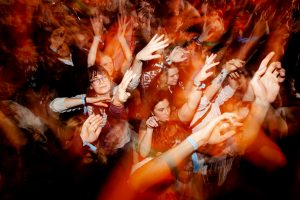