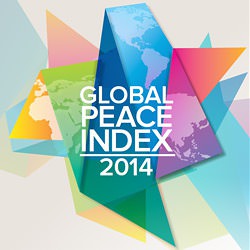 Iceland was the most peaceful country in the world for the third year running in 2014, according to the Global Peace Index of the Institute for Economics and Peace. The island was joined in the top ten by fellow Nordic countries Denmark, Finland and Norway, with New Zealand, Canada and Japan as the only countries outside Europe in the top 10. At the other end of the list, the least peaceful countries in the world included Syria, Iraq, Sudan, North Korea and Russia.

The Index looks at things like violent conflict, violent crime rates, freedom of the press, willingness to participate in wars and political corruption. It is therefore not terribly surprising that Iceland scores well, since Iceland usually scores very well on corruption indexes (13th in the world last year, local’s allegations of rampant nepotism notwithstanding), has no standing army, and last year it happened for the firs time in the country’s modern history that the police killed a man while trying to disarm him, at which point the chief of police issued a formal apology to the nation, since he felt the force had failed its duty to the republic. However, and despite the fact that Iceland kept its #1 place from last year, the country scored slightly worse for peace than last year, mostly due to increased defence spending.

The IEP pointed out that while this is the most peaceful epoch in history, in recent years we have been seeing a downward spiral, while 51 countries have become more peaceful since 2008, 111 have become less so. The Institute also emphasises the importance of global effects, where non-peaceful countries can negatively affect the countries around them and at-risk countries such as Zambia, Haiti and Georgia can easily deteriorate into states of distress. The Index points out the economic cost of violence, $9.8 trillion last year, 11% of global GDP, and contrasts it with the cost of positive investment in such things as education and healthcare (such as can be seen in all the top countries on the list) which can work to curtail domestic and global violence.