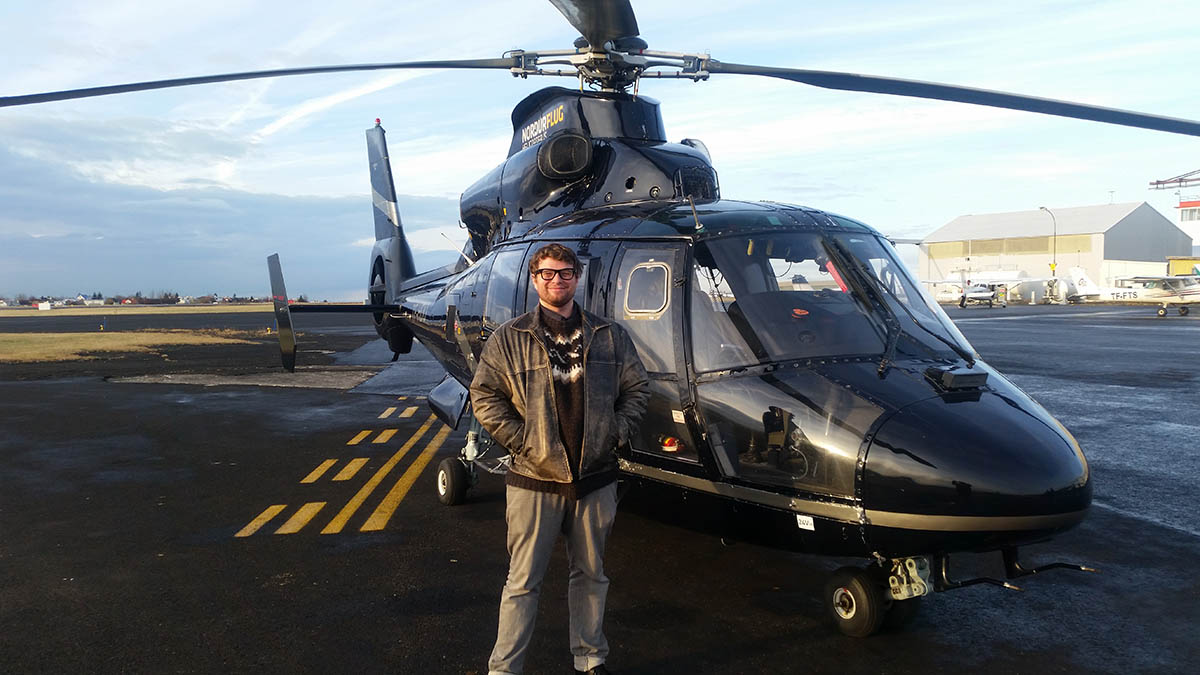 Helicopter Flight from Reykjavik to the Summit of Mt. Esja

I recently got the chance to take a helicopter tour to the top of Mount Esja across the bay from Reykjavik. I’ve been up there many times but never like this – for one thing I’ve never been on a helicopter before! It’s really cool how you take off, the rotors speed up gradually for what seems like a long time, and then suddenly, you’re airborne, hanging about a meter off the ground, as stable as if you were still on the ground, but you know you’re not – totally different from an airplane. Then you zoom off and in seconds you’re looking over the city!

It was really cool to see the city from the air, but I thought the big deal was that as soon as you gain any elevation, you’re looking beyond the city into the mountains, fields and oceans beyond. I mean living there, you forget how tiny Reykjavík is, and how quickly you’re in the countryside. So the tour is above Reykjavík, but Reykjavík really isn’t the main thing. The bay is beautiful and the mountains in the distance all around are magnificent. 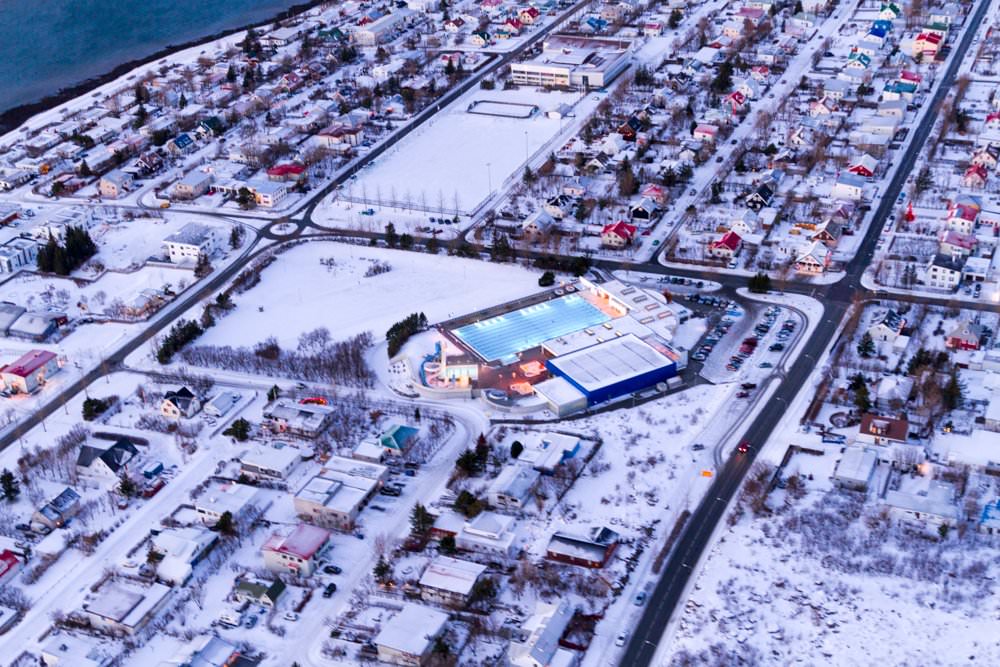 Mount Esja is the classic day-hike from Reykjavík – even the public bus goes by there and some people go there every week, or even daily. For a person in decent shape it’s a 2-3 hour hike up and down, for Reykjavík firemen, apparently they jog up and down in about 45 minutes (probably while bare-chested and without breaking a sweat, those showoffs). For me it’s a 5 hour hike. I’m a big guy, shut up. The trail is easy enough that you can go there with your family, but challenging enough that I would call it a hike and not a walk, and I’m always caught off guard by how steep it is. The trail has a high point by the rock called “Rock” – a huge boulder with the name “Steinn” written on it. (In Icelandic, “Steinn” is a proper name, and also the word for a “rock”. Think about that for a second; wrestler “The Rock” would be kind of like just being called “Jim” here). After that it’s a bit of a hand-and-foot scramble to the very summit, without any guardrails and precious little path, but luckily there is a chain there to hang on to. (Iceland is not as safety obsessed as many countries).

I’ve driven around the bay, parked my car and hiked the main trail to the top of Þverfellshorn probably a dozen times. Ok maybe 5 times though for reals. One time with like 5 children! This is a completely different thing – for one thing by going straight across the bay, you realise how near the mountain is, it’s barely 10 minutes to the top. You fly over magnificent vistas of mountains and peaks, and really get a sense of the scale and grandeur of the mountain range. 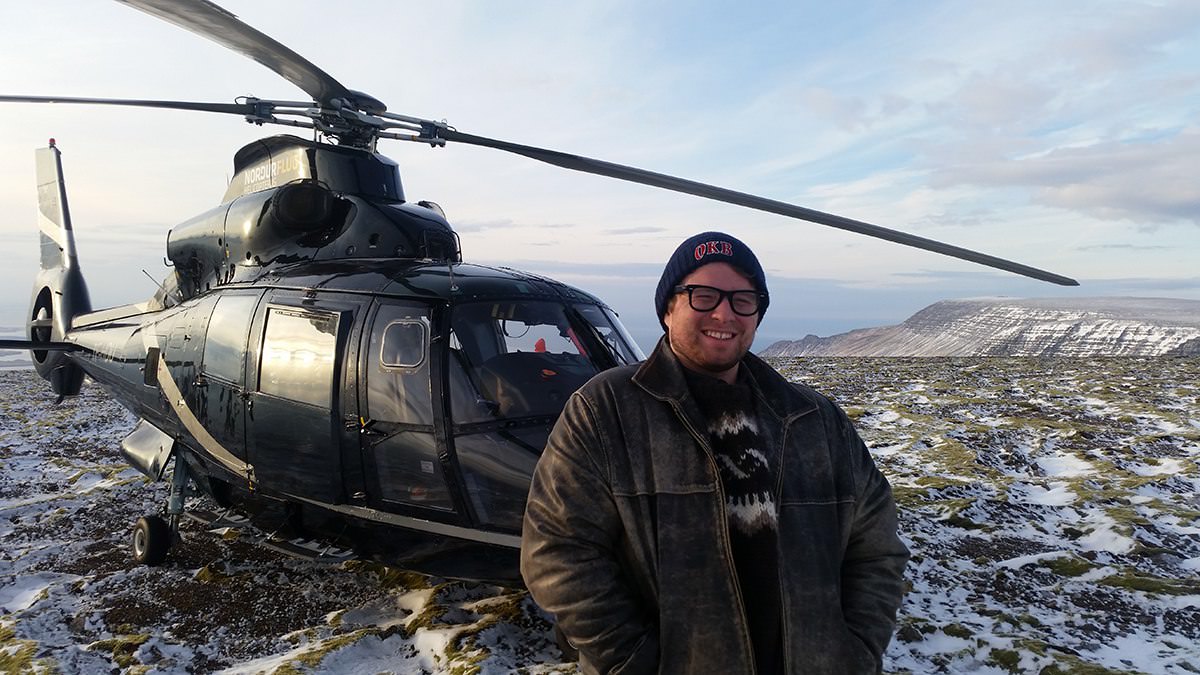 The helicopter touched down almost too effortlessly. The pilot sounded kind of like your uncle parking a car “aallright, just gonna scout for a good place…. aaand we’re down.” And then we were standing on top of the mountain in a brisk refreshing wind, looking over the mountain range and hillsides on this crisp, clear, sunny day, overlooking the city across the bay and out over the deep blue sea. It was beautiful. On this particular day there was a bit of a mist over the city from the Bárðarbunga volcano in the east, which added an eerie ambience over the whole thing. Then when we’d had enough, we hopped in the ‘copter and took off just like that. The vertigo of flying over the suddenly dropping off mountain was exhilarating! 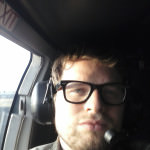 I definitely would recommend this tour to anyone, especially if you’re only in the city for a short time but wanted a sense of the nature of Iceland (the whole thing took about an hour), or if you wanted to get the mountain view but had mobility problems (or even if you just don’t feel like/are too lazy to hike… ). It’s also a great way to experience the thrill of a helicopter ride for a lower budget, since you’re not going too far, but you still get the thrill of the ride.

The pilot told me that sometimes the tour would head to Kleifarvatn, south-west of Reykjavík, or somewhere else, depending on the weather and conditions, as well as the preferences of the passengers, so if you’re anxious to see any specific place, drop us a line and we’ll figure it out for you 🙂