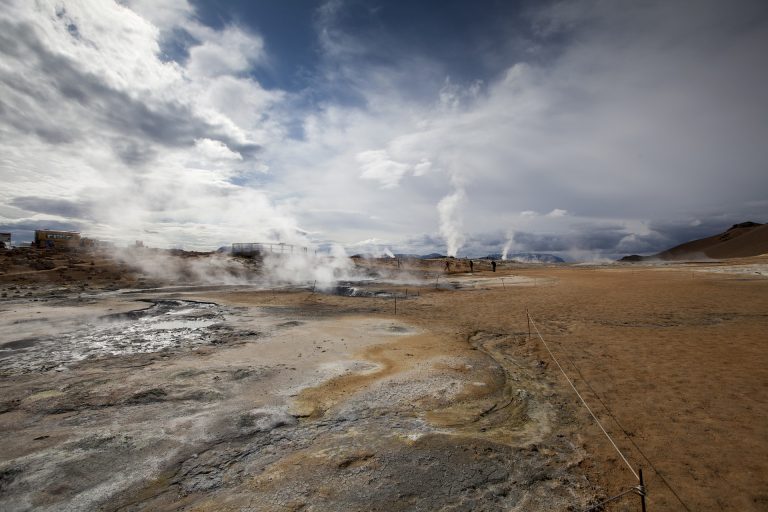 Ever heard of the Blue Lagoon? This swimming pool is also warmed by heat from just under the earth’s crust.

But not only is geothermal heat useful, it also creates beautiful, otherworldly landscapes. In this article, we will tell you more about these geothermal areas in Iceland. 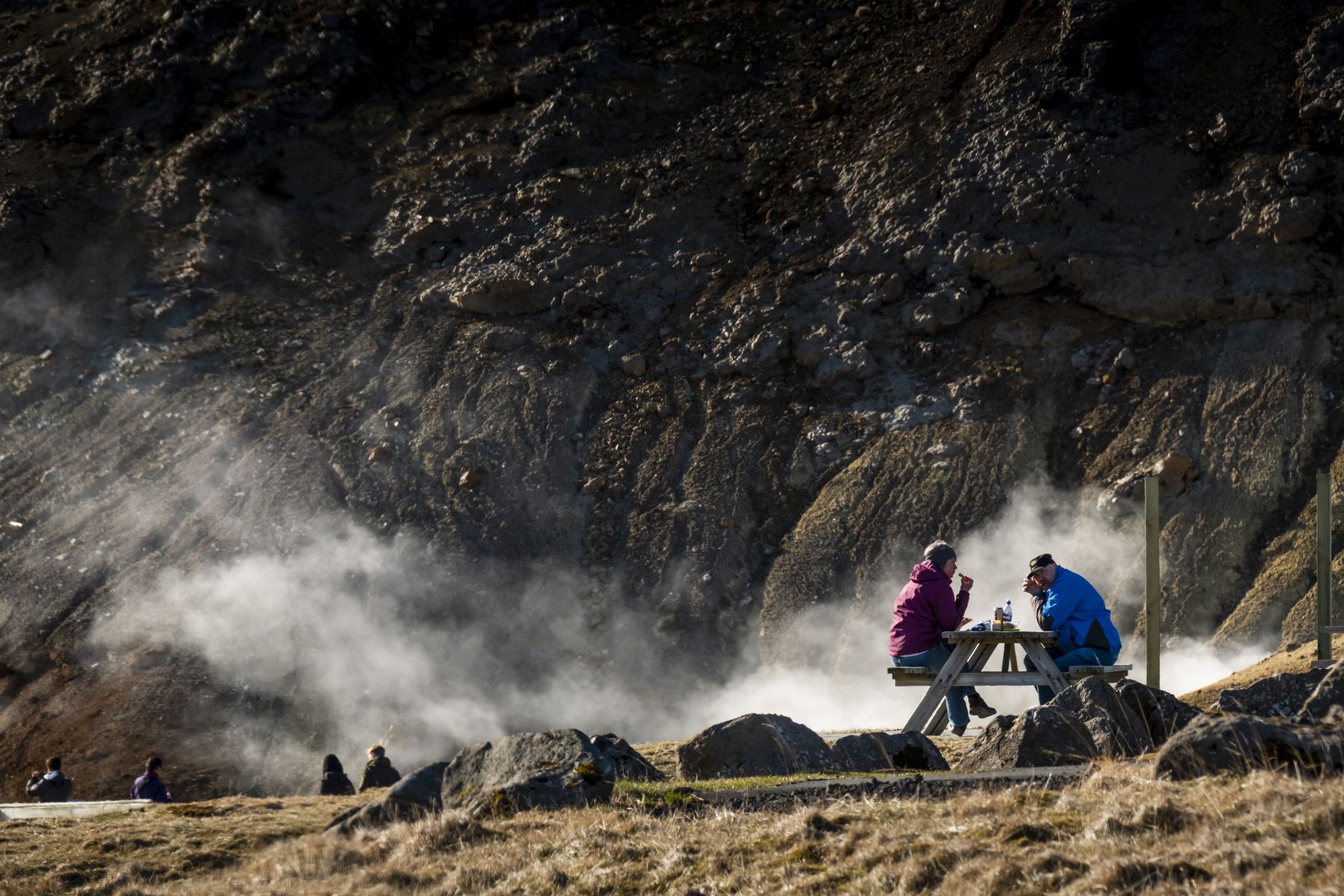 Geysir, located in the geothermal Haukadalur valley, is part of the world-famous Golden Circle. This area is mostly known because of its active geyser, Strokkur. Strokkur erupts every 6 to 10 minutes, and spurts water 15-20m up into the air. Geysers erupts because water in side chambers underground starts to boil, and the jet of water is a way to release pressure.

These days, we can only imagine what it would be like to see Strokkur’s big brother and the namesake of the area, Geysir, erupt. It used to spout water 80m up into the air, but unfortunately this geyser has not erupted since 1916. However, Strokkur and the various other hot springs and smaller geysers in the area make this a compelling place to visit.

Book a Golden Circle tour if you would like to visit Geysir. 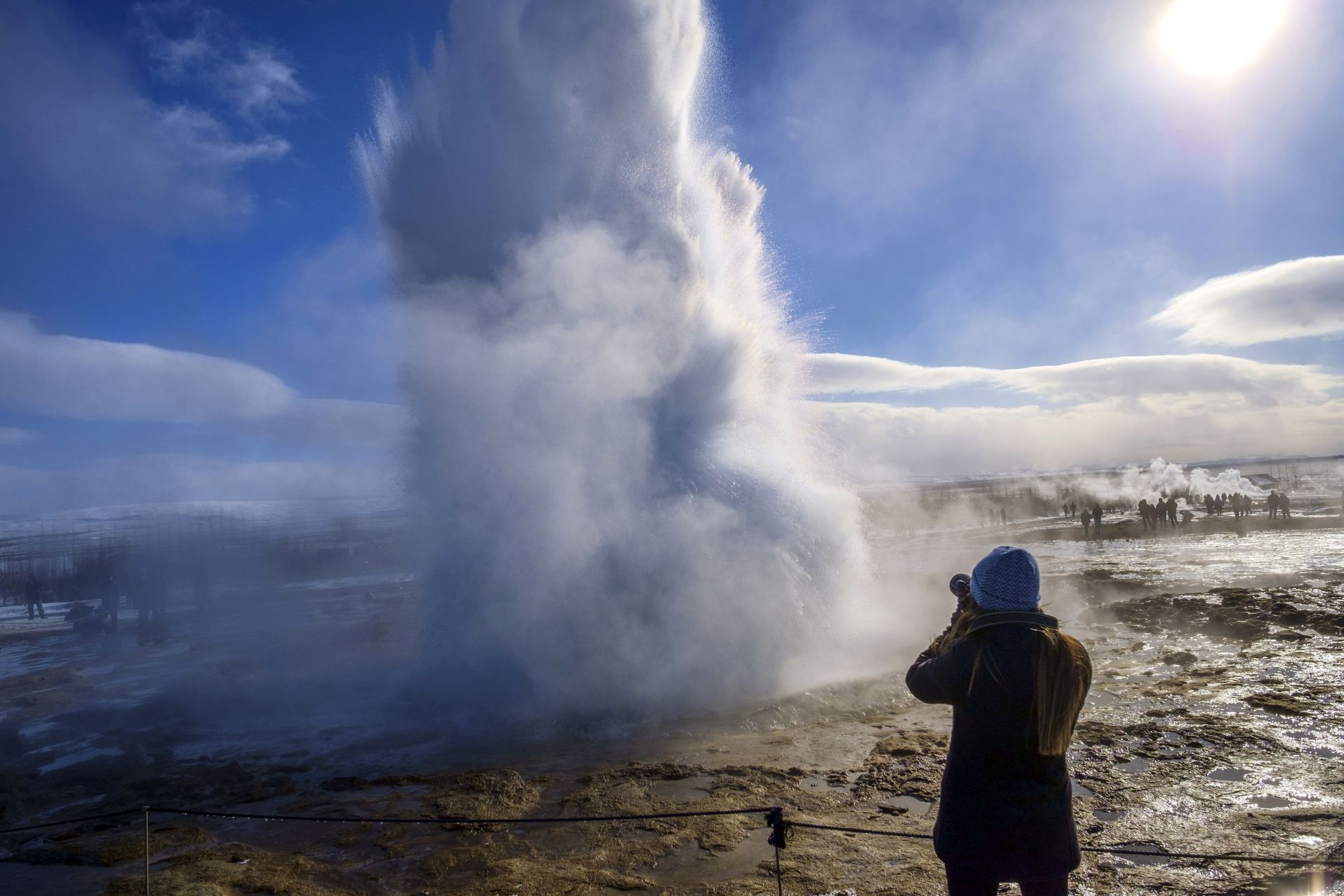 Ever felt like going to Mars? Say no more. Just head to North Iceland. Close to the beautiful Mývatn lake you will find geothermal area Námaskarð. Just below Mt. Námafjall, you can walk past sulphurous mud pools, hot springs and steaming fumaroles. Sulphur-rich minerals give the area its distinct yellowish-red colour. It’s unlike anything you’ve seen before.

The ground can get dangerously hot in certain places, so always stay on the special pathways.

Also, check out the geothermal Mývatn Nature Baths just on the other side of Mt. Námafjall. 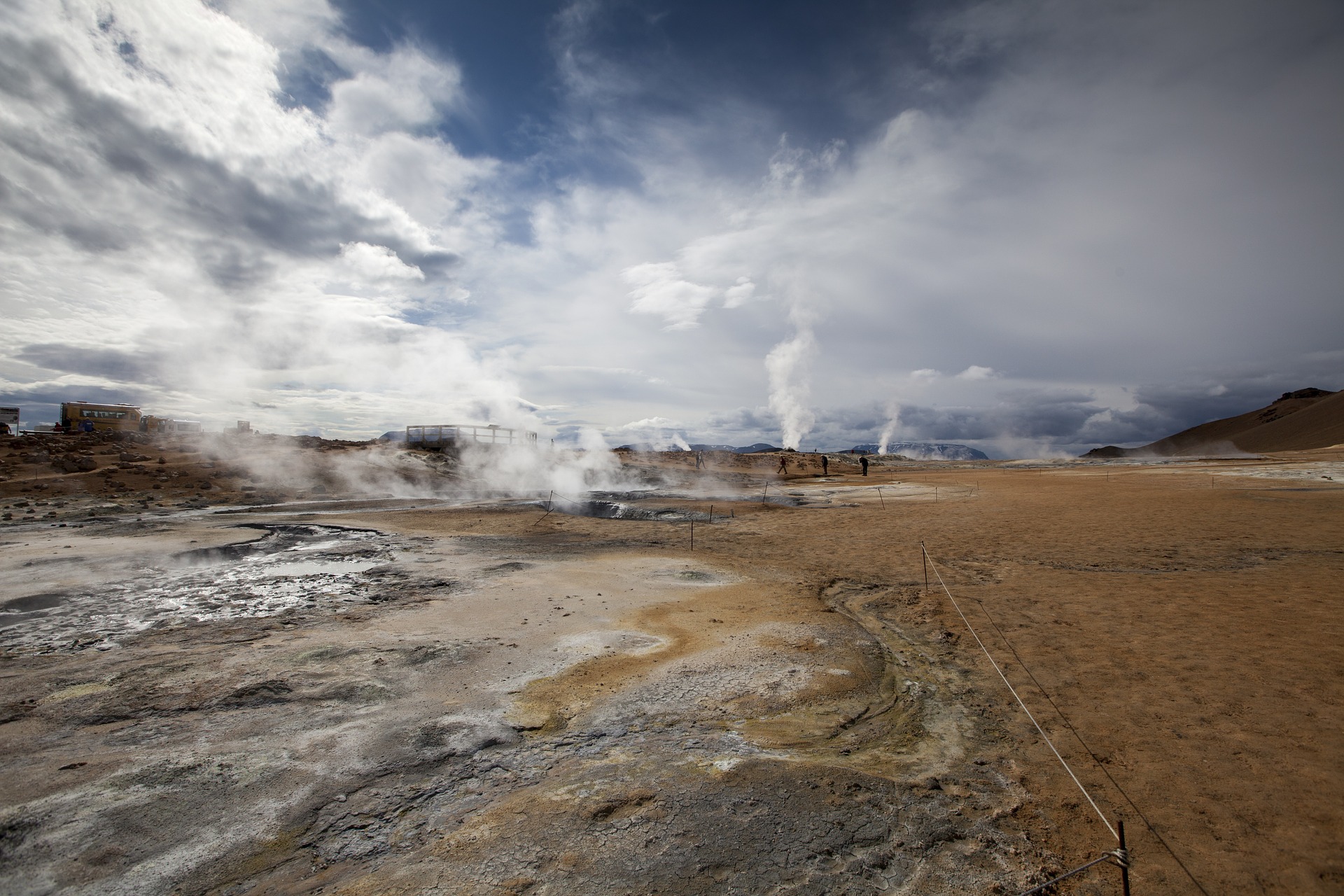 The area is named after the ghost Gunna, who lived in the area about 400 years ago. She caused many problems before a priest set a trap for her that made her fall into the hot springs.

Today, a well-marked path leads you along the different mud pools, one of which is the biggest in Iceland – of 20m wide.

Book this tour if you want to visit Gunnuhver and other wonders on Reykjanes peninsula. 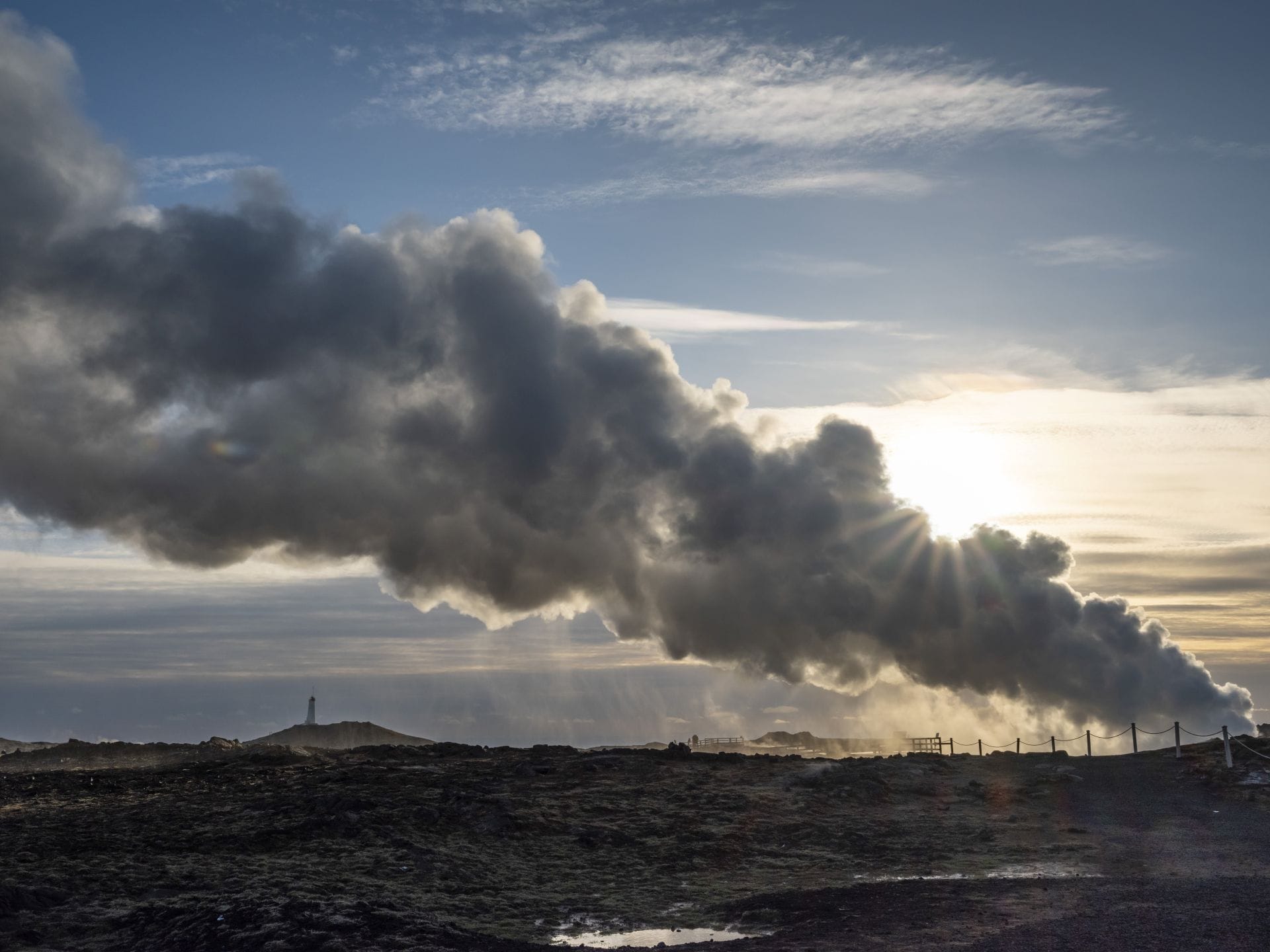 Hveravellir is a geothermal area in the highlands of Iceland, and therefore only accessible in the summer months when the roads to Iceland’s interior are open. Check www.road.is to read the most recent information about Icelandic roads. It’s not recommended to go with a small car, as road conditions vary.

At Hveravellir you will find facilities for travellers, mountain huts and an information centre with a small restaurant and internet café. The geothermal area contains several mud pools and impressive fumaroles and has good wooden walkways. There’s also a natural hot pool next to one of the huts, perfect when you’re looking for a relaxing moment after hiking in the area. 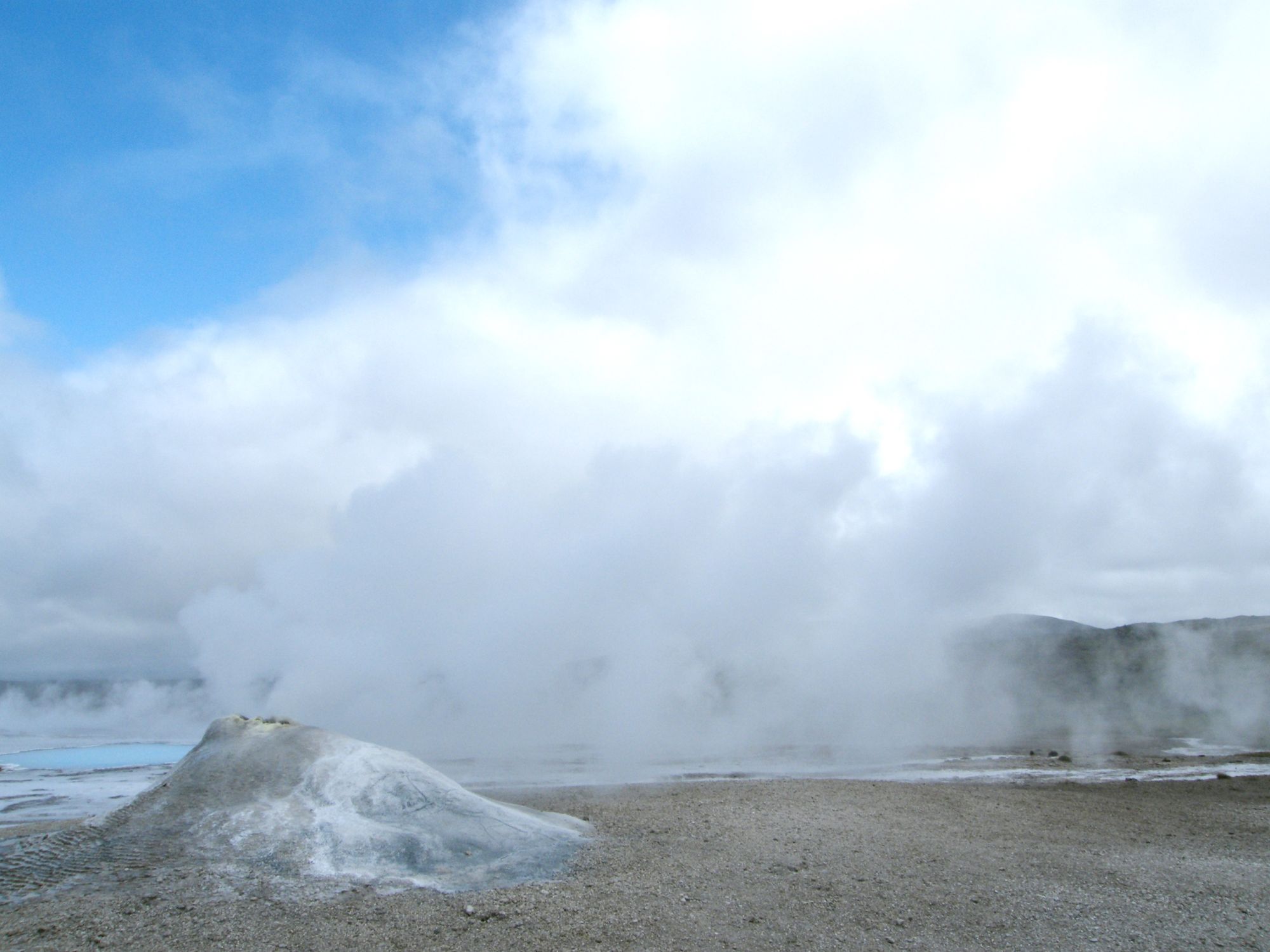 Kleifarvatn is a large, beautiful lake about 30km from Reykjavík. It’s located in a geothermally active area, and therefore the lake has underwater hot springs. These hot springs pump warm water and gases into the lake, causing thousands of bubbles. You can observe these hot springs up close during one of the diving tours that are organised in the lake. But watch your surroundings when diving, because as the legend goes, a gigantic worm-shaped monster lives in the lake.

Right next to Kleifarvatn, there is an interesting geothermal area called Krýsuvík. A boardwalk leads you along the different volcanic vents and boiling hot pools. The colourful mountains in the area are the perfect background for the steaming, bubbling hot springs. This area shows just how alien Icelandic landscapes can get. 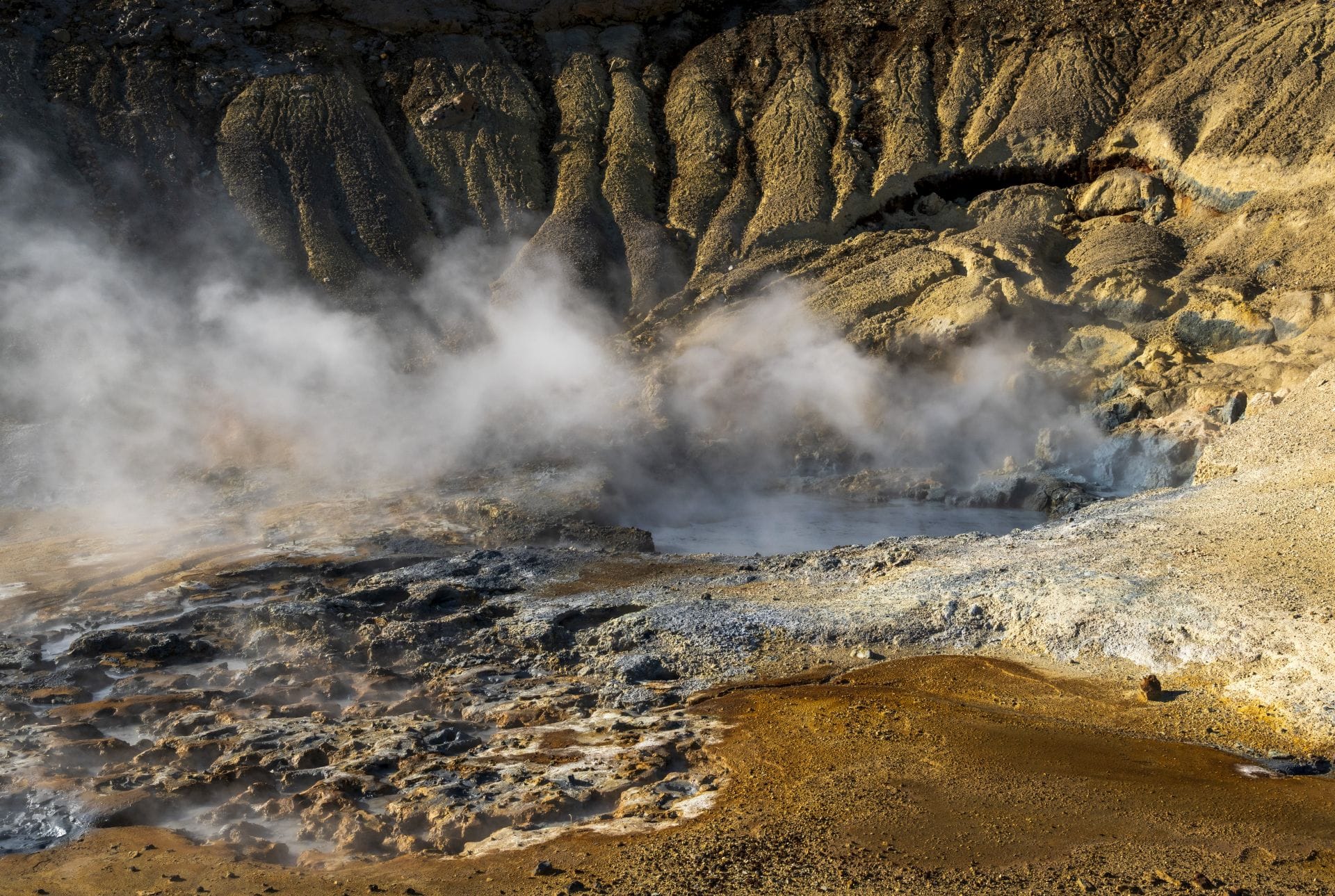 Even though beautiful and awe-inspiring, keep one thing in mind when visiting geothermal areas – the awful smell! Sulphuric gases spread a pungent egg-like stench.