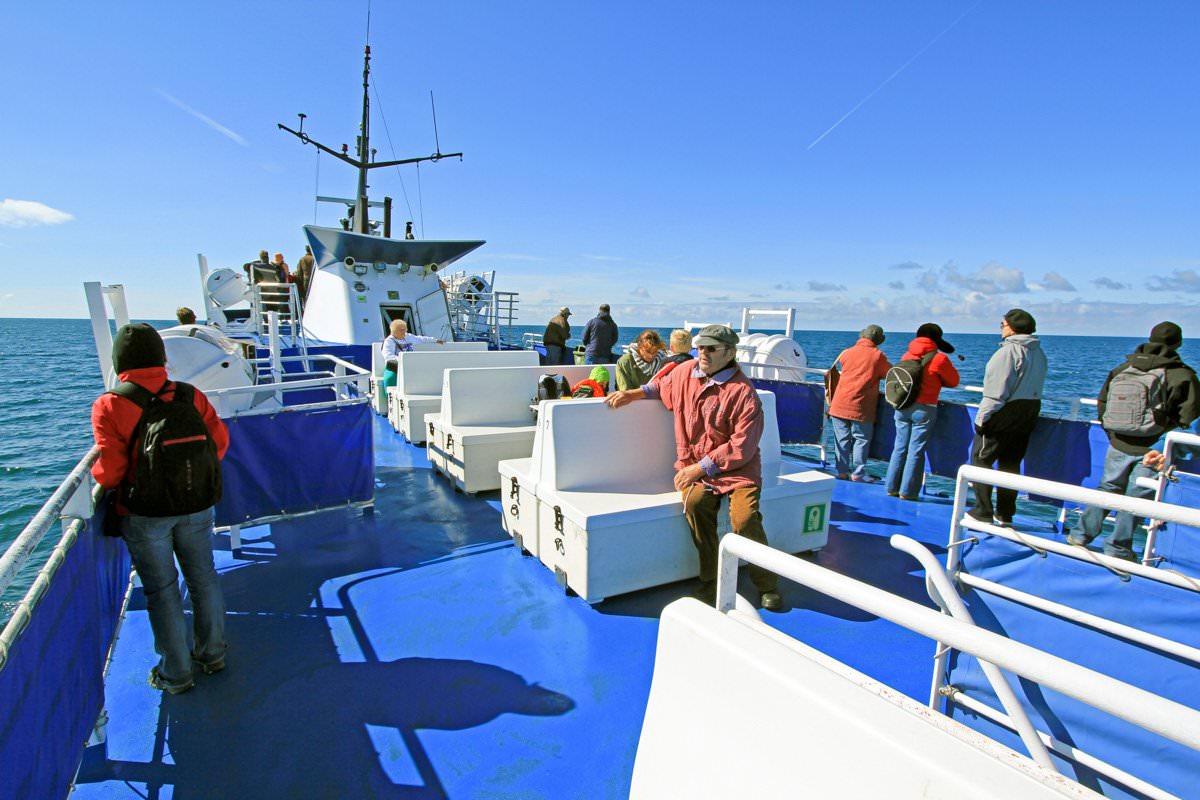 How to Travel by Ferry in Iceland

Iceland is an island in the North Atlantic, which means you can reach it by plane or by ferry. Iceland is a large island of 103,000km2, but a lot of smaller islands are part of it, too. It has about 30 smaller islands and thousands of rocks and skerries. These islands are located all around the country, and some of them are inhabited. Stepping on a ferry and leaving a port is a unique way of travelling. It usually goes slower, and you have all the time in the world to enjoy your surroundings. And you might see whales and dolphins along the way! There are several ferry services in Iceland, and in this article, we will tell you all about them.

Herjólfur – the ferry to the Westman Islands

The Westman Islands are an archipelago of 15 islands off the south coast of Iceland. Only Heimaey is inhabited and with a population of about 4,350 in 2021, you could say it’s densely populated compared to Iceland’s other islands. Heimaey reached international news when in 1973 volcano Eldfell erupted unexpectedly, burying 400 homes in lava and ash. The island recovered since then and visiting Heimaey is a popular tourist activity.

To get to the Westman Islands by boat, you take ferry Herjólfur. There are two harbours from where the ferry can depart, depending on weather conditions. The first is Landeyjahöfn harbour. A one-way trip to Heimaey takes about 35 minutes. The second option is Þorlákshöfn harbour. The ferry will leave from this harbour when the weather is bad, or when there is too much sand buildup in Landeyjahöfn harbour. The ferry ride from Þorlákshöfn to Heimaey takes 2 hours and 45 minutes.

Baldur – the ferry from Stykkishólmur to Flatey island to Brjánslækur

You can take ferry Baldur from the town Stykkishólmur on the Snæfellsnes peninsula to Brjánslækur port in the Westfjords, via Flatey island. Flatey is the biggest island in Breiðafjörður fjord in West Iceland. The fjord is filled with close to 3,000 small islands. Quite a few of these used to be inhabited. These days, only Flatey is inhabited year-round, by just a handful of people.

The ferry ride to Flatey takes about 1.5 hours. When you arrive at Flatey, you can stay for a short visit, explore the island by following its only road and continue your journey farther to Brjánslækur in the Westfjords or head back to Stykkishólmur. Of course, you can also stay overnight, in which case you will have more time to enjoy its rich birdlife and unique surroundings.

Hrísey is Iceland’s second largest island, after Heimaey in South Iceland. It’s located just off the coast of Dalvík in North Iceland, and it has a population of 162 in 2021. You can hike around the island following its good hiking trails. If you’re looking for something different, try the sightseeing tour by tractor. On the island you will find several facilities including a swimming pool and a shop.

You can reach the island by ferry from Árskógssandur town, and the boat ride takes about 15 minutes.

Sæfari – the ferry to Grímsey island

Grímsey is an island 40km off the coast of North Iceland, touching the arctic circle at its northern point. It has 57 inhabitants in 2021. The island is home to many birds, of which especially the Atlantic puffin attracts many visitors each year.

You can take ferry Sæfari from Dalvík to get to the island, a boat ride that takes about three hours one way. It has happened more than once that people see whales and dolphins along the way. In summertime, you have four hours to look around on the island before the ferry heads back to Dalvík, which is enough to see most of it and take a picture on the arctic circle.

Hornstrandir in the Westfjords is Iceland’s northernmost peninsula. It’s a nature reserve known for its dazzling cliffs, rich birdlife, and amazing sea views. It takes a bit of travelling to get there, but the hiking opportunities in this area are worth it! The area is the natural habitat of the arctic fox. In isolated, uninhabited areas like Hornstrandir, arctic foxes feel more at ease around humans and are therefore easier to spot.

Gestur – the ferry to Viðey island

The island of Viðey lies right off the coast of Reykjavík and can be reached by ferry. The island has a long and rich history – for centuries it was considered one of the best farmlands in the country, it had a monastery, and the oldest stone building in Iceland is situated in Viðey. The island is only 1.7km2 and 32m at its highest peak, so a tour of the island is perfect for a short walk and a long picnic. The island is also home to interesting works of art, the most famous being Yoko Ono’s Imagine Peace Tower.