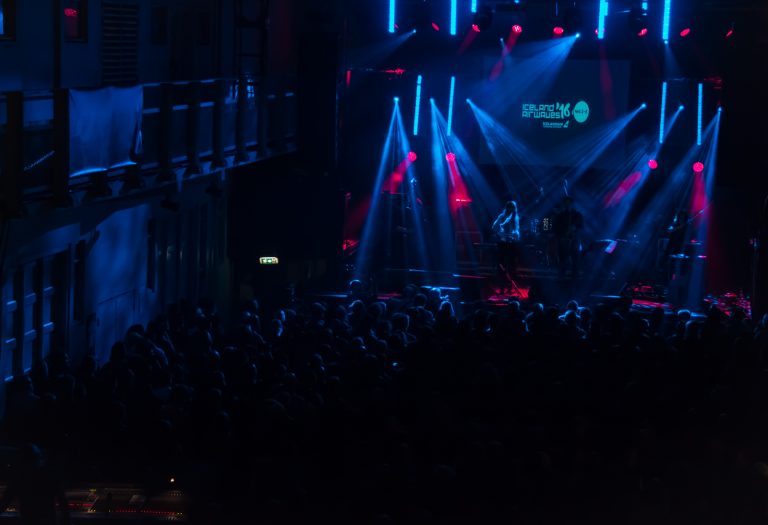 Iceland Airwaves ’16 is here! Everyone at What’s On is so excited and we wanted to share the excitement so we’re going to tell you all about last night’s show. We’re giving you two different perspectives, Gréta will give you the local’s view and Ian is representing fresher eyes because as the Icelandic proverb goes: “Keen is the guests eye.” For reviews of the other nights and more, click here! 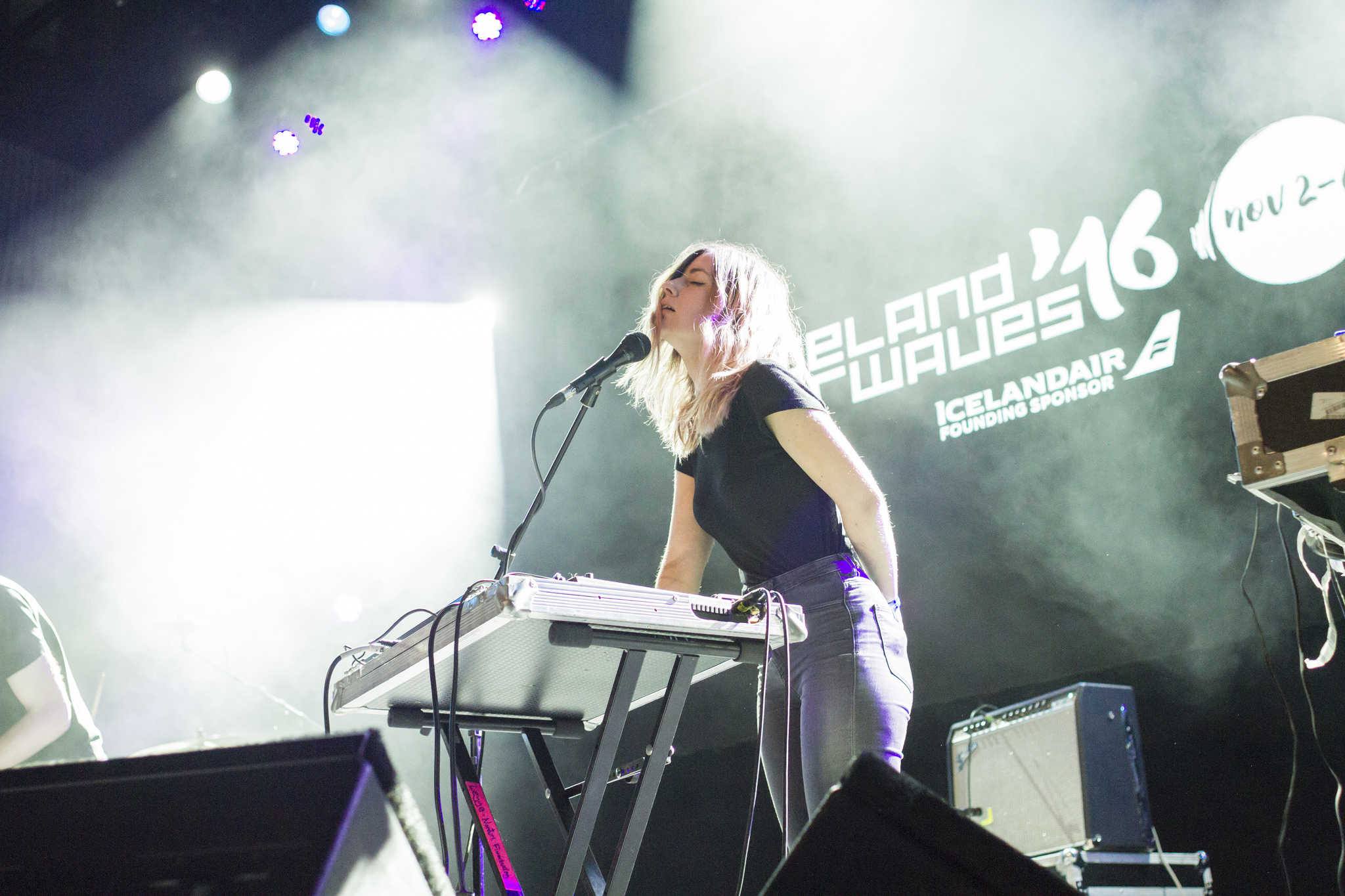 I started day two at Harpa to see Austrian experimental/electronic pop formation Leyya. I’ve listened a little to their music, which is great, with catchy beats and interesting vocals. Although their performance yesterday was quite adequate, seeing them perform live really didn’t add much to the experience of listening to their music at home. When we realized this, we decided our festival time could be better spent elsewhere and headed over to the Reykjavík Art museum for Julia Holter’s show. Julia Holter is one of the artists I hadn’t heard of before this festival, which is one of the reasons why going to Iceland Airwaves is so fun. It’s a long weekend of a cool friend telling you what they’re listening to at the moment! 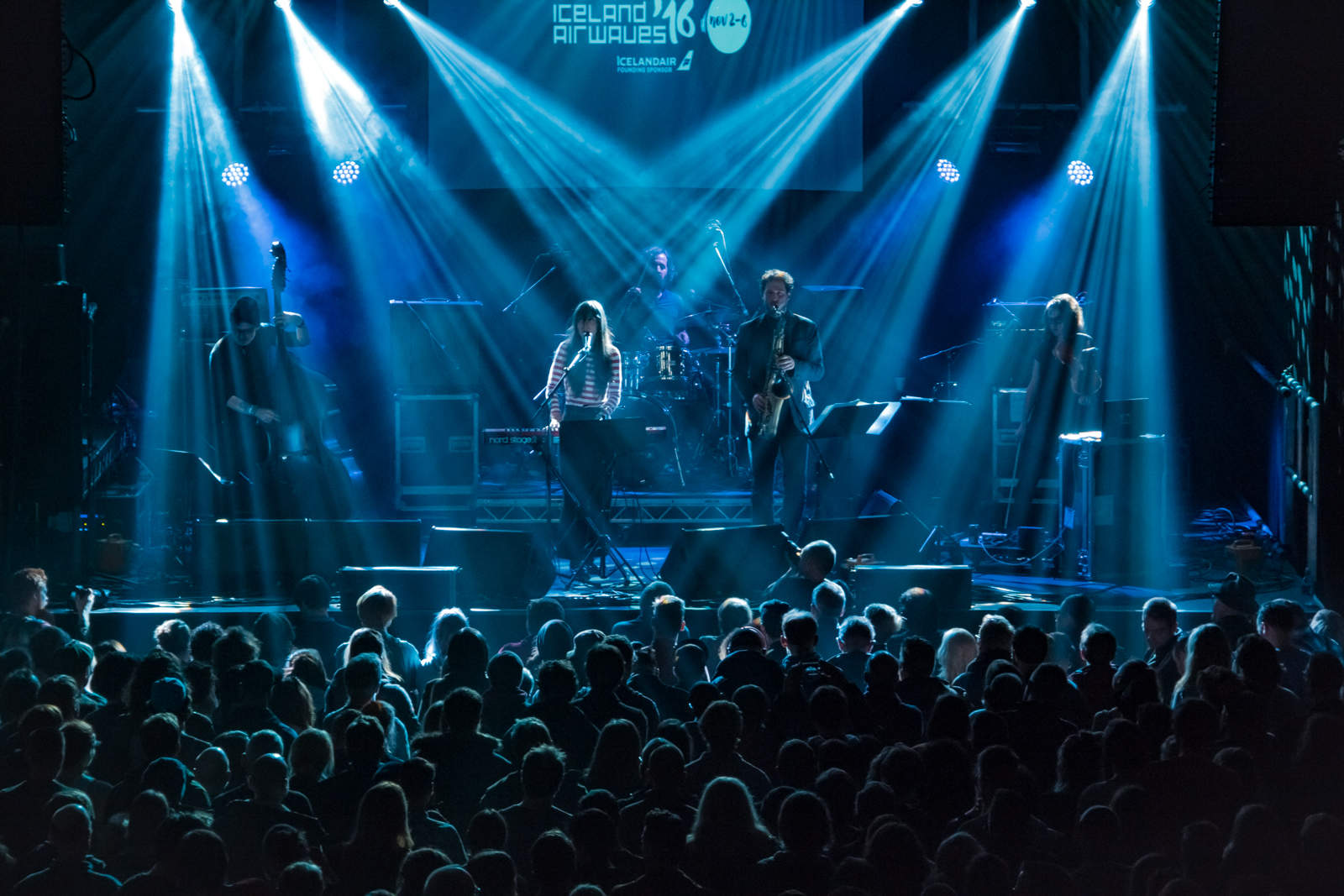 Okay, so the Harpa concert hall, with its many stages and rooms is a great place to hold concerts and it’s a really beautiful building and all that, but I must admit that I really like going to a concert at the Reykjavík Art Museum. Originally built as a warehouse and office building for the Reykjavík harbour, this former industrial building’s long and relatively narrow hall gives the stage a different kind of look than what you usually see. Of course, the stage’s look doesn’t really matter if the show isn’t good but this time, luckily, it really was.

After Julia’s show, we headed over to quite a different venue, Húrra, only to just miss the end of Doctor Spock’s show. Next up were Nap Eyes. They’re a Canadian group from Halifax which sounds exactly like the Velvet Underground. They were pretty good in a low-key sort of way so we actually used their show to take a little break, sit down and relax for a bit before moving on to the next act. 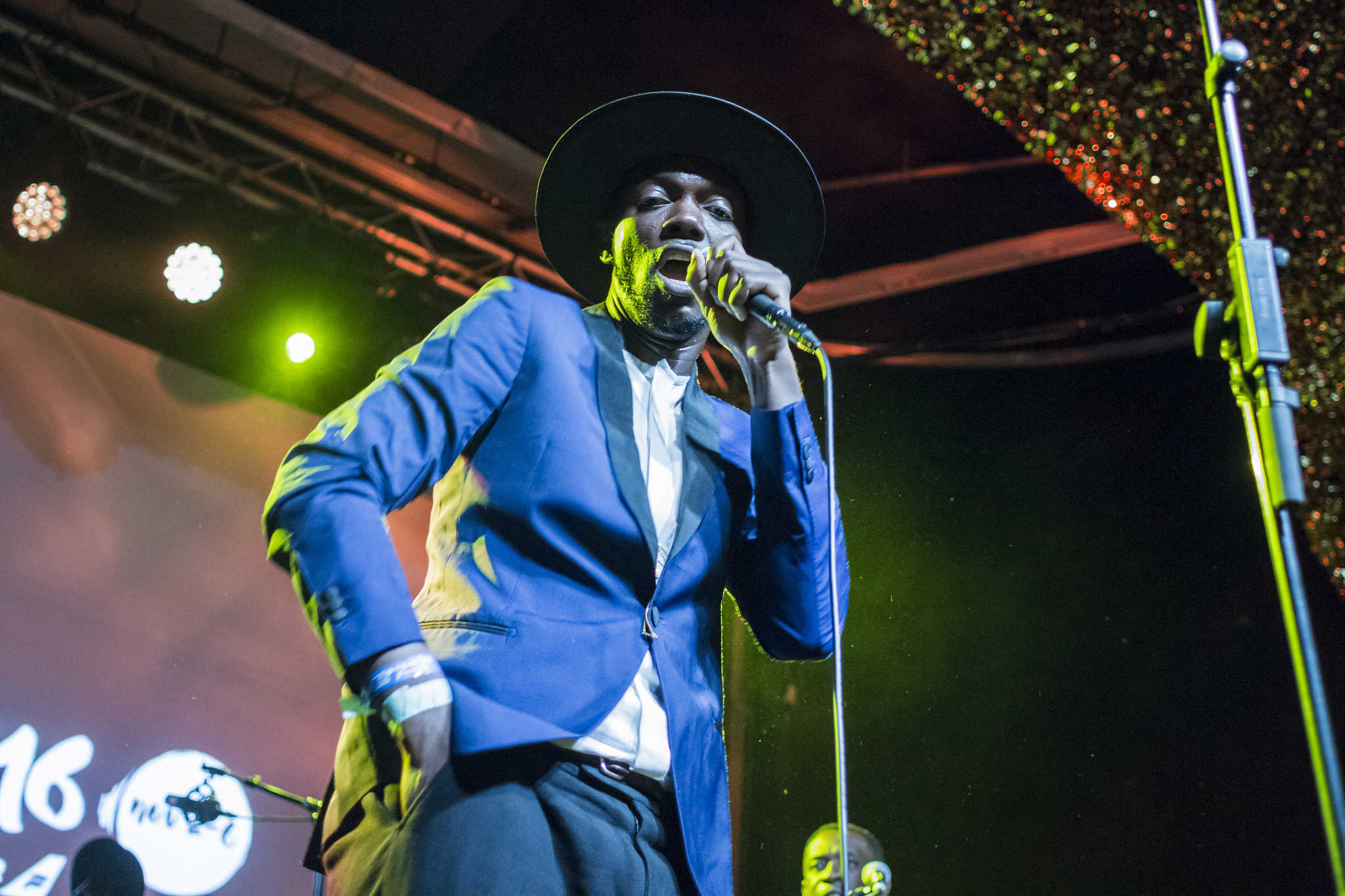 This next show was actually the high point of my night, Baloji at Nasa. According to the Airwaves promotional material, Baloji wears many hats; poet, composer-lyricist/beatmaker, scriptwriter, actor and performer, video artist and stylist. He wears them well, in my opinion, both the figurative ones and the literal one he was wearing that night while he was making the crowd go wild. It was impossible to stand still as soon as he and his band struck the first chords! His genre-bending music resonated with the audience, resulting in the best show of the night in my opinion.

With day one of airwaves in the past and the festival in full swing, I had the feeling entering day two that I would spend my remaining nights setting my sights on the end as I was brought through a haze of shows, music, and alcohol. Oh, how wrong I was! It began with an off-venue show that was so packed you couldn’t even get past the front door, so I decided to skip that and save my energy for the first official show at Húrra, my favourite Reykjavík watering hole. 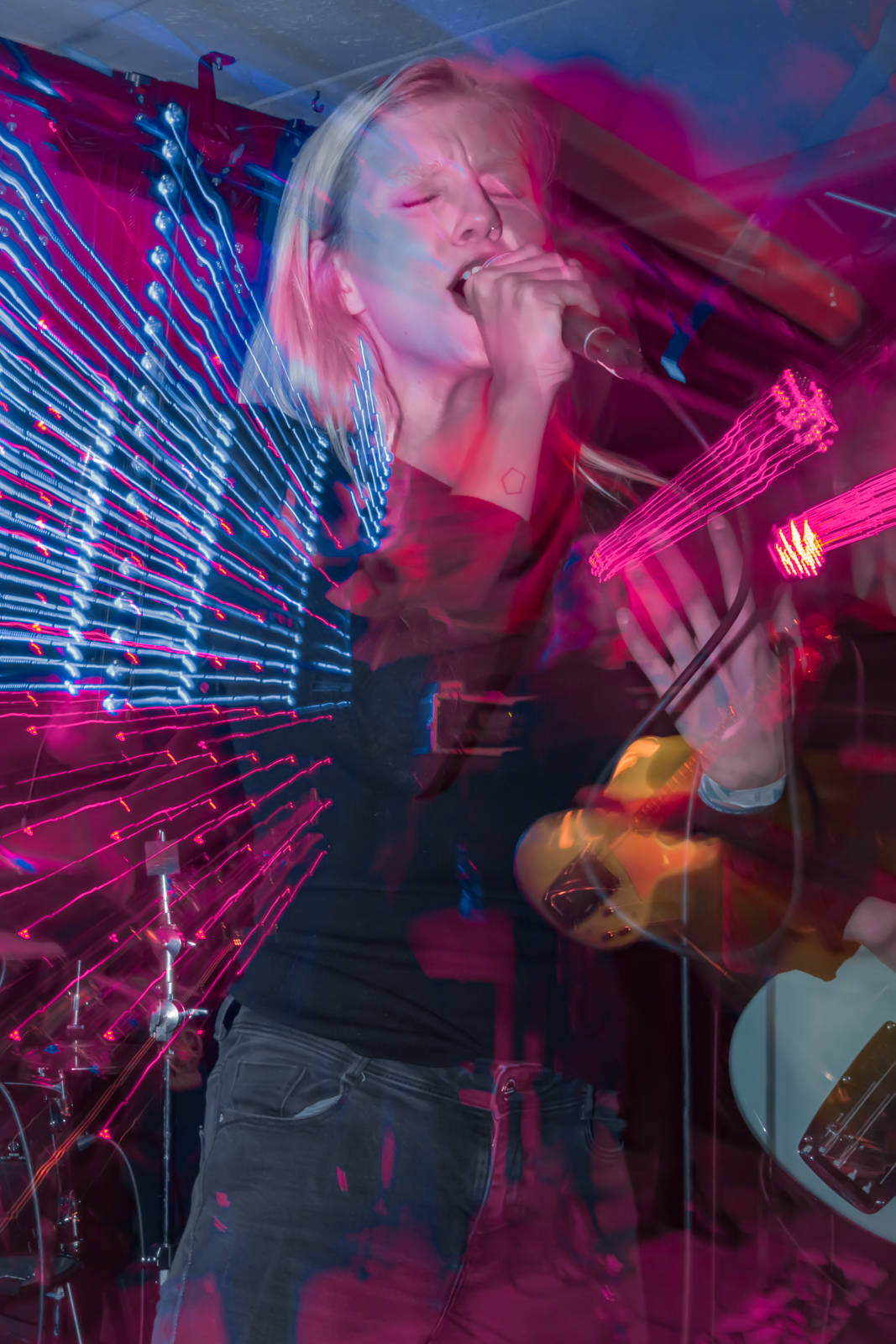 The band playing was a 5 member punk band called Hórmónar (Whoremoans). I am continually blown away by the female artists that I see in Reykjavík and this band was no exception. As time goes on I realize that my true passion and taste in music is the punk scene. Having never fully experienced Icelandic punk before, This show made me determined to seek it out in the future. Not afraid to express emotions and go outside of the realm of normal comfort, they produce a show that is both delicate and over the top to create one continuous rise and fall of emotions, calming you down, just to bring you right back to the edge. For the final song, the lights got dim creating a contrast between the black shadows and the blood red lights silhouetting the members. It created a visual sensation that I can only describe as an elegant glow with a sense of destruction lurking in the shadows. That may just be the best way to describe this band as a whole, a warm embracing welcome with powerfully dark inner workings just waiting to explode in all directions. As an audience member, I could not have welcomed it more.

Next was over to the Reykjavík art museum to see Julia Holter. It was a great show but coming from a punk band my energy levels were not jiving with the pace, I needed something to match the pace at which my blood was pumping. 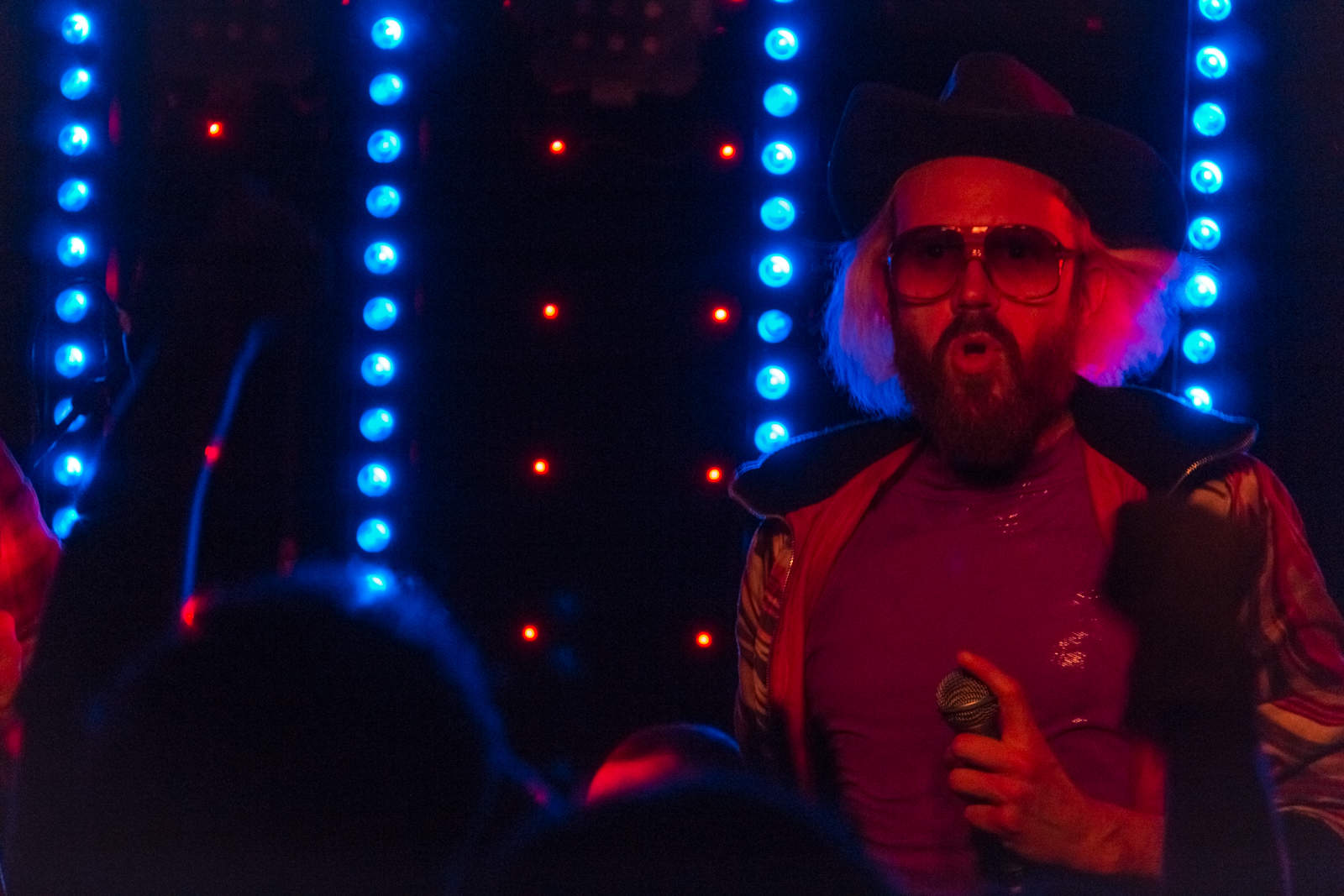 Returning back to Húrra with no idea of who was playing, I stumbled into a raging scene of rock created by the one and only Dr. Spock. With a stage presence that consisted of a humor and hard rock, it was tough to find a balance between laughing and rocking out, but I was happy to learn one does not have to choose between the two. The 6-member band had a way of transitioning between songs that formed one endless production that I want to describe as a mashup of energetic rock and cartoon-like antics that made it impossible to draw your attention away. Wearing sunglasses, a cowboy hat, and a yellow rubber glove on his right hand, the lead singer really pulled the whole image together creating an immortal image that made me feel like I was not just watching a band, but rather experiencing a surreal event. All in all, this was definitely a better surprise than I could have ever hoped for when starting my night. 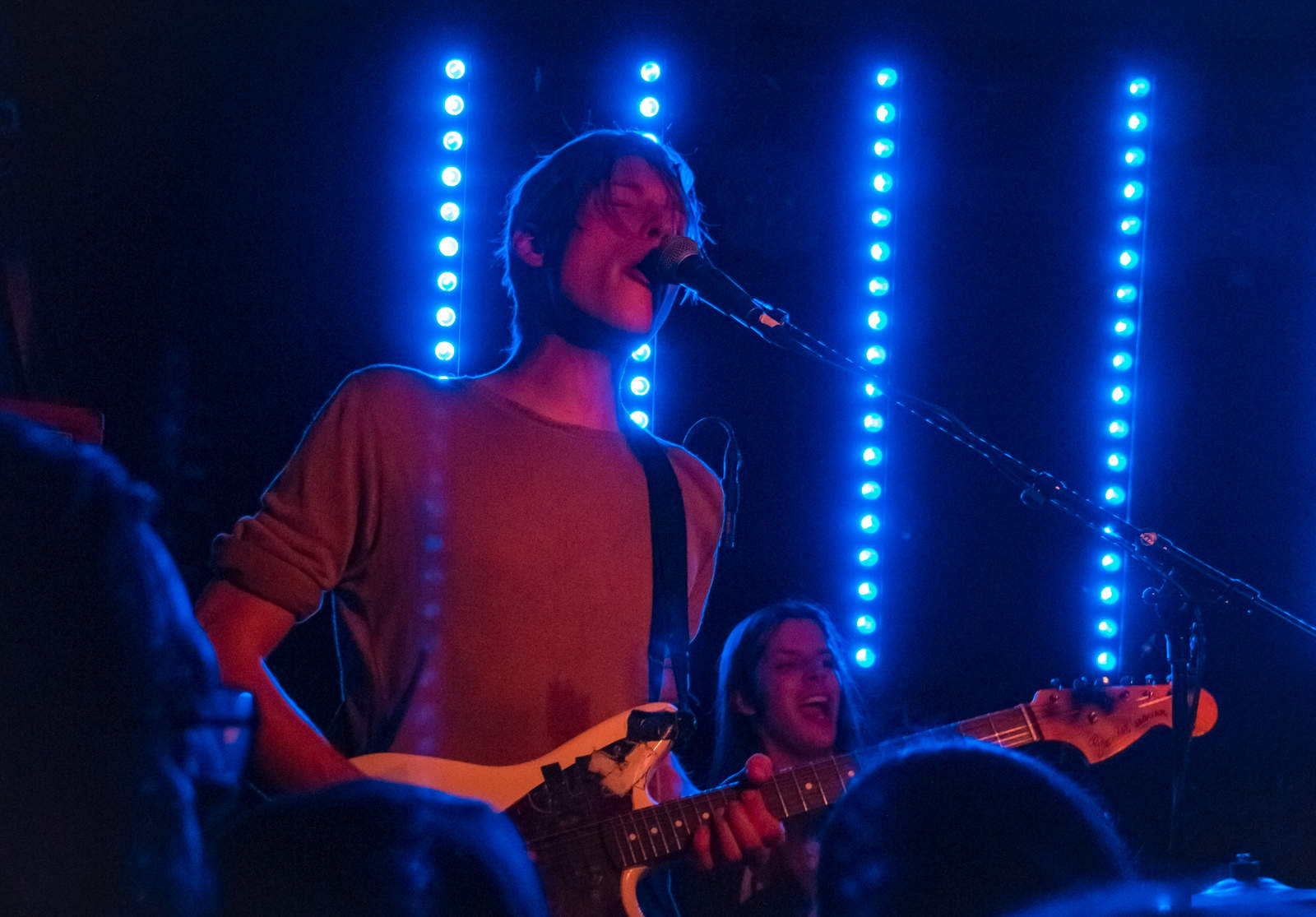 Next on stage was the German 3-piece band, Die Nerven, playing noise rock/post-punk. I was told by a German native that this was a must see band and after having the intense pleasure of witnessing them perform, I can confirm one hundred percent. Creating a presence that exceeded all my expectations for a three-member band, I became lost in the sound that washed over the entire venue. I was reminded of my youth when I saw the first mosh pit I have ever seen open up in Reykjavík. There is really nothing like watching a mass of people thrash together in a rebellion the social norm, giving themselves over to the chaos and becoming a manifestation of noise. However, the artists had a way of pulling you through the chaos in a symbiotic mix of space and sound, giving you time to breathe before triggering a scream. They are definitely a band that is better felt than described. The last thing I will say besides being a must see performance is that their drummer was unbelievable, in both stage presence and talent, and he deserves much praise.

My final experience of the night was unlike anything I could have predicted, walking into a room at Harpa that was set up as a lecture hall, I chose a seat and doubted my decision to see Amnesia Scanner. I chose the word experience because I don’t know if I can call what happened a show, but when the entire room became filled with fog, depriving you of your visual senses, I knew it was the right decision. Despite being one of many to take part in this show, I felt isolated and separated from not only the others in the room but from the whole festival and reality as a whole. Their music is electronic but grows as an organic entity. I could not help but feel like I was a fly on a wall in another dimension, somehow transported into a reality I knew nothing about, alien in nature and completely surreal. Before I knew it, the hour had passed and I was hurled back into the reality of this world, leaving me in a daze filled with pleasure and confusion. It was not like any show I have experienced before and I am hoping it won’t be the last. 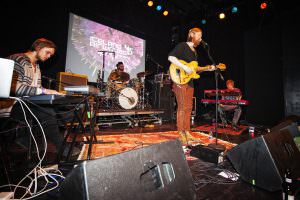 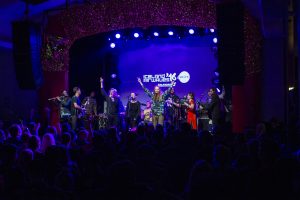 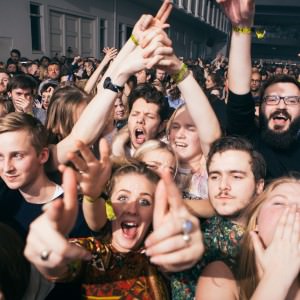 Are You Going To Iceland Airwaves 2016?