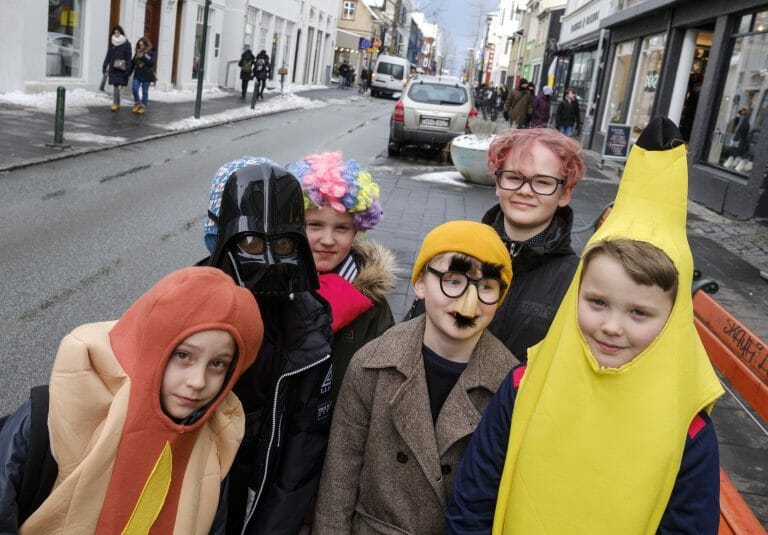 In predominantly Catholic countries, Lent is typically preceded by a carnival. Though most Icelanders, belonging to the national Lutheran church, don’t fast during Lent, they still kick off the season with a holiday or three – and they’re not what you might expect.

Bolludagur, which roughly translates to “Cream Puff Day”, is the first of three days constituting the Icelandic Carnival. Bolludagur is celebrated on the Monday before Lent, six weeks before Easter, so its actual date varies each year.

Bolla (‘bollur’ in plural) is the Icelandic word for all sorts of circular pastries. The bolludagsbolla, however, is something special. It’s a choux pastry traditionally filled with jam and whipped cream and topped with a chocolate glaze, although bakers have been experimenting with all sorts of fillings. It can be made at home or bought from a bakery, and its only flaw is that it’s only served on Bolludagur.

It’s believed bakers from Denmark or Norway introduced the custom to Icelanders in the middle of the 19th century, so we have them to thank for our annual bolludagsbolla feast.

Eating bollur is great, but that’s only one aspect of the day. According to tradition, you cannot buy your own bolla – someone has to buy it for you. And if you manage to spank someone before they get up in the morning, they owe you a Bolla. Children all over Iceland ready their bolludagsvöndur (a paper paddle they’ve made for the occasion) the night before Bolludagur so they can creep into their parents’ room the next morning to spank them repeatedly while shouting“Bolla!” What a way to start a Monday morning?

Sprengidagur, or Bursting Day, is Iceland’s version of Mardi Gras, which Icelanders celebrate by eating their fill of saltkjöt og baunir – boiled, corned (salt-preserved) lamb (sometimes horsemeat) and split pea soup. It’s delicious! On Sprengidagur, every Icelandic home, as well as most restaurants, are flooded with the aroma of salted meat and peas.

Why is it called Bursting Day? Well, you should eat until you feel like you’re going to burst (think Monty Python’s Mr. Creosote) – even if you’re still full from stuffing your face with cream puffs the day before.

Even without the anticipation of fasting over Lent, Icelanders have dedicated two days to filling up on treats. It’s basically a celebration of gluttony, so enjoy it!

Ash Wednesday is, in most countries, a solemn day. It’s the first day of Lent, a time of fasting and prayer, in which people give up something they enjoy to remember Jesus’s 40 days in the desert. In Iceland, however, it’s a day for children to don costumes and sing songs for candy. Think of it as the Icelandic version of Halloween, minus the pagan undertones. The children only sing for candy in shops and businesses (In Reykjavík and larger towns, at least), so Laugavegur and the shopping malls are typically brimming with costumed kids. The children are expected to earn their candy by singing a song, a tradition that excites the young ones, but is dreaded by most adults, especially those working in commerce.

Whether you’re travelling in Iceland with a child or not, you may want to keep Öskudagur in mind – either to pack a costume for your kid or to plan your grocery shopping around it.