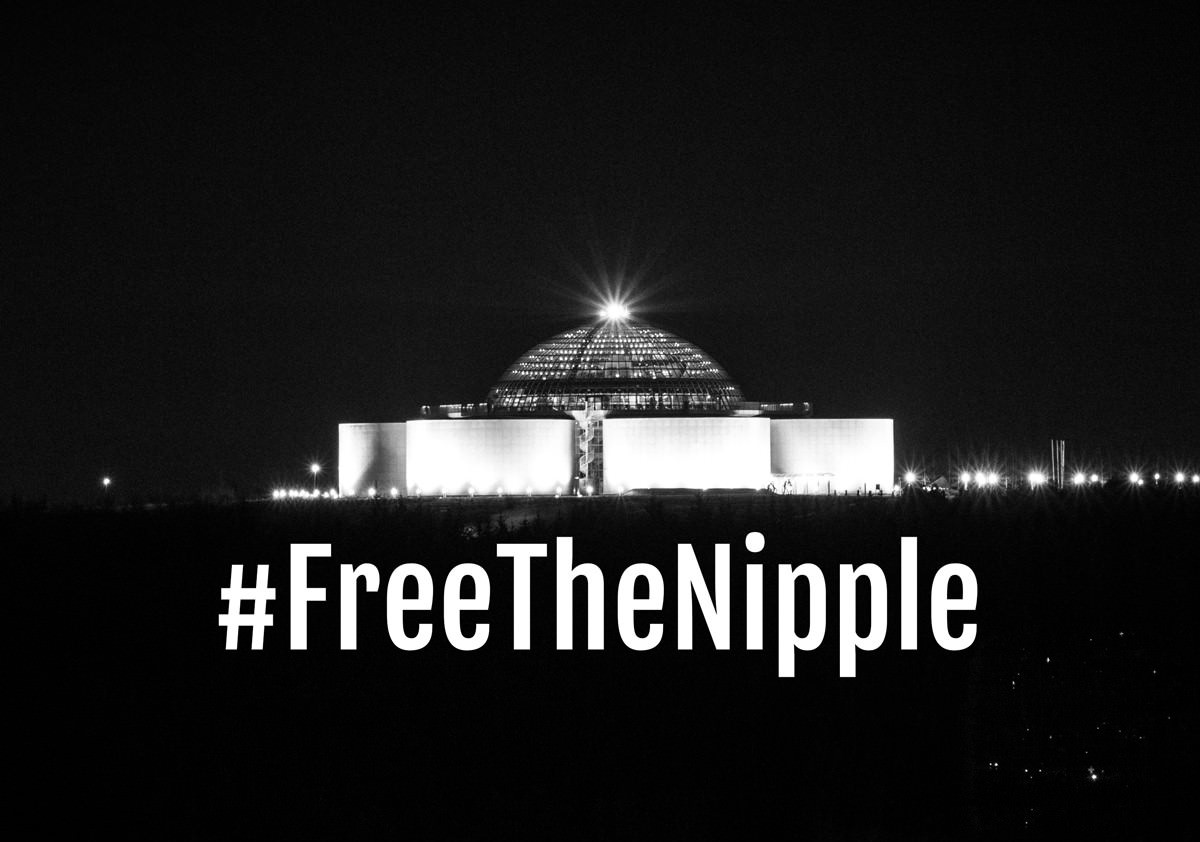 Ever heard of the #FreeTheNipple campaign? It’s about how women should be able to take their tops off just as men can, without having to worry about being slutshamed, sexualised and censored. Men and women both have nipples and it’s a double standard how men’s nipples are thought of as any other body part, while if a woman shows her nipples it’s suddenly regarded as sexual or obscene. This is originally an American campaign but in the last couple of days, Icelandic feminists have taken it to the next level.

When Adda Þóreyjardóttir Smáradóttir, a 17 year old student, put a picture of her breasts on Twitter as a part of promoting a Free the Nipple-day at her school, she received some unfair criticism. She has had to take the picture down for practical reasons. Since then hundreds of Icelandic women have showed solidarity and support to Adda and the cause by posting pictures of their own breasts on social media. This has sparked thousands of tweets and what has been called the biggest event in Icelandic internet history. This hasn’t only been happening online though. Today was a nipple-day in the University of Iceland as well as several secondary schools in Reykjavík. Several young students from the Kvennaskólinn school walked topless down Reykjavík’s main shopping street. Icelandic women have shown incredible solidarity, either by posting photos, by being braless for a day or just doing whatever they feel is comfortable.

There has of course been some scepticism about the  #FreeTheNipple campaign. Some people are saying that the girls posting photos are just in need of attention, that they’ll regret this one day, that some of them are too young to be exposed on the internet. To those voices I’d like to say: your views represent the problem that we are trying to fix.

Those girls are not desperate for attention, however this is a cause that demands attention. No battle has ever won itself, so we need to take a stand for things to change. The girls shouldn’t have to ever regret any of this since their breasts shouldn’t be viewed as sexual objects. They shouldn’t regret it any more than a man would regret a picture of him at the beach. You’re saying that they’re too young, but how old are girls when they start to experience objectification and sexualisation?

Then there is the ever-present terrible argument about men not being able to control their sexual urges around women. So that if a woman posts a picture of her breasts, she has suddenly made it OK for anyone to call her a slut, sexually harass her or worse. To begin with, men are perfectly able to control themselves. Secondly, this is victim blaming and sexual harassment or assault is never the victim’s fault. A woman posting a picture of her breasts online is not giving anyone any sort of permission. Her body is still her own.

I have been a feminist for as long as I remember and I find this is absolutely amazing. I think it’s the start of a revolution. It’s not just about girls exposing their breasts for a day, this is going to change the way society defines women’s bodies. This initiative is a huge milestone in women’s rights here in Iceland, and hopefully it’ll have an international effect as well.

Here are some of my favourite tweets from today:

Björt Ólafsdóttir, member of parliament, posted a picture of her breast:
“This one here is for feeding babies. Shove that up your patriarchy.”

Jóhannes Jóhannsson, actor:
“If you have a problem with it… that’s your problem.”

If you have a problem with it… that’s your problem. #FreeTheNipple

Björk Brynjarsdóttir, journalist:
“If you love it set it free”

If you love it set it free #FreeTheNipple pic.twitter.com/jbsK2QuUyp

Reykjavik Slut Walk 2015: A March for the Survivors of Sexual Abuse