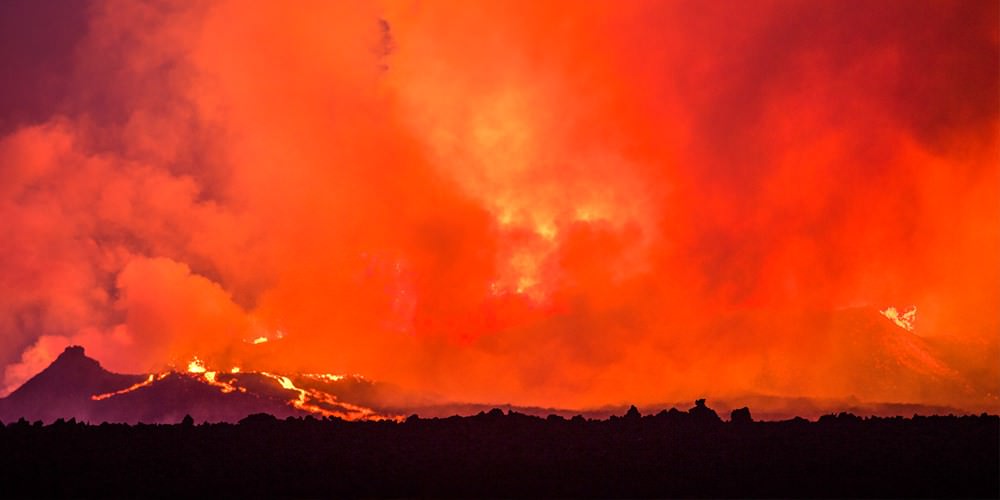 Iceland is a hot spot. And no, I do not only mean as a travel destination but in the geographical sense; it’s literally a hot spot. Which, in combination with being located on the mid-Atlantic Ridge, right on a rift between tectonic plates, leads to the country being rich in (active) volcanoes.

Since Iceland’s settlement, 13 eruptions have been documented. Evidence of eruptions can be found in the numerous lava fields and the tubes underneath the remainders. And then there’s the empty volcano chamber of Þríhnúkagígur; accessible for descent. There’s no active volcanic eruption at the time when this is written but you can still get a taste of the enormous forces lurking underneath the earth’s crust by checking out some of these hot spots. 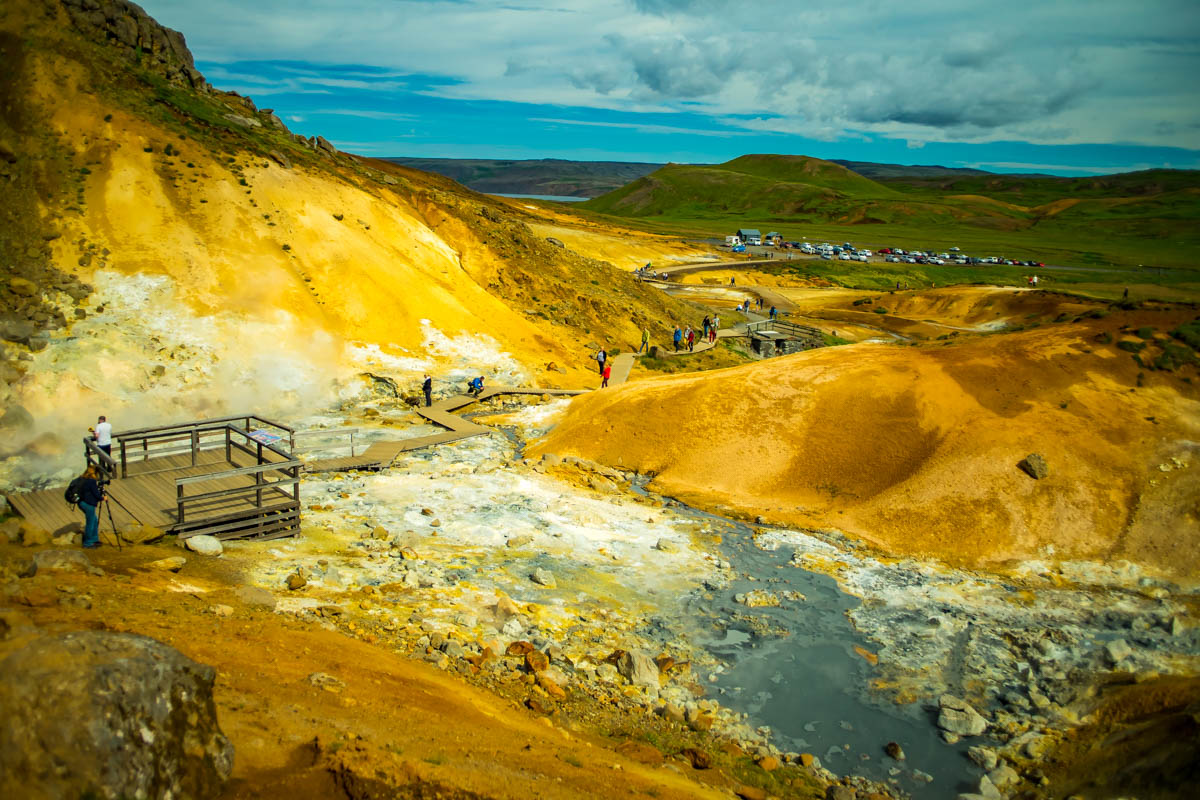 Roughly a half an hour drive from downtown Reykjavík you will find an active volcanic area. Imagine, 30 minutes between shopping for some fine Icelandic sweaters to standing on top of centuries’ old lava. Sounds pretty cool, doesn’t it?

The volcanic Bláfjöll (Blue Mountains) area around Reykjavík is due, as the last documented eruption took place in 1389. An outburst in this region comes in cycles of roughly 800-1000 years, meaning we could be close to a new outpour of lava fairly soon. Still, don’t let that influence  your travel plans, Icelanders are pretty good at keeping themselves and tourists safe during volcanic eruptions.

You can take a guided tour around the area, learn about the volcanoes and the effect possible eruptions would have on everyday life in Reykjavík. Walk on the endless fields of rubbled lava and have a peek over Bláfjöll from atop a mountain.

In the same area, you will find a collective of hot geothermal springs, ringed by remarkable shades of beige, brown and gray. A clear path manoeuvres you through a variety of boiling puddles of mud and volcanically heated water. Damp rising, bearing the smell of sulphur. An amazing display of how the boiling magma underneath the earth has a visible effect. 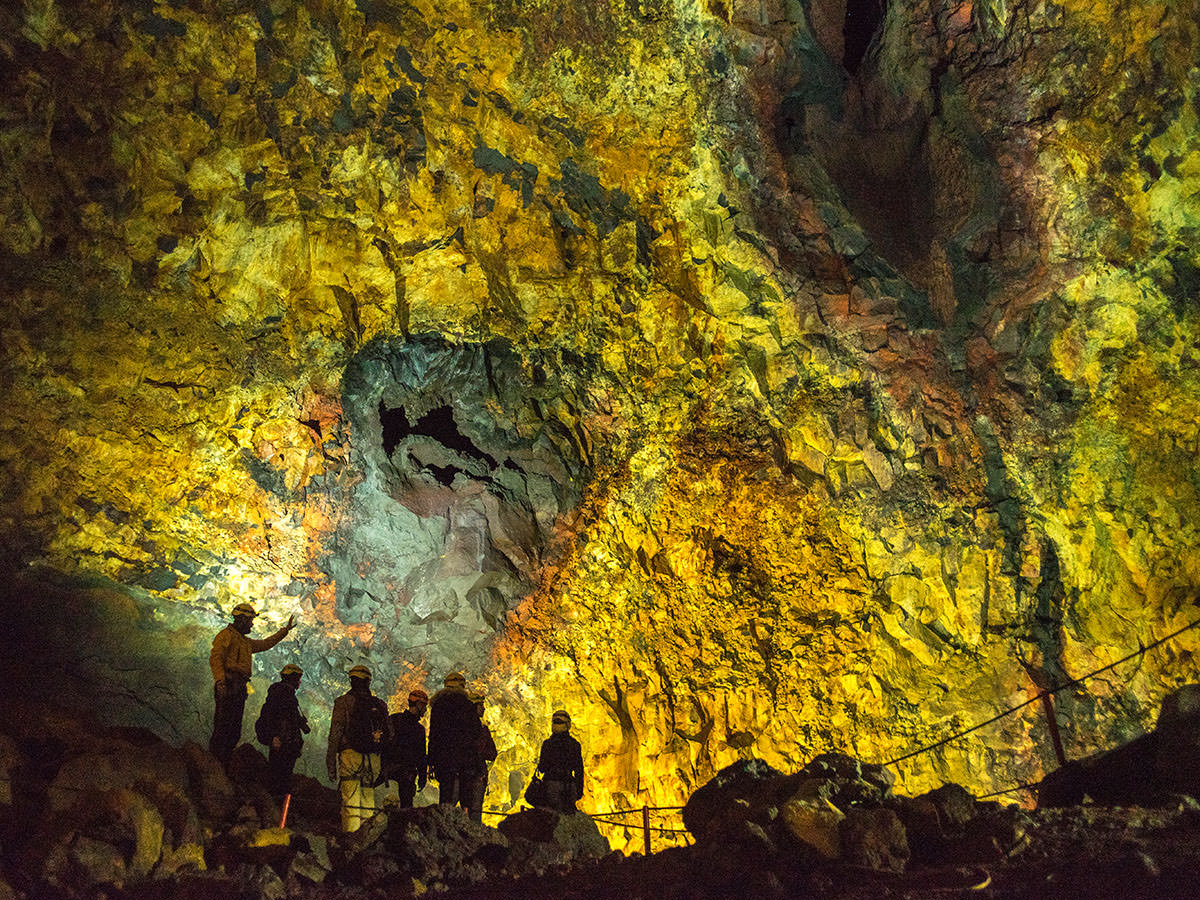 When simply looking at volcanoes is not enough for you, then Iceland is the right place to be. The volcano at Þríhnúkagígur, also a half an hour drive from Reykjavík, didn’t collapse under its own weight after its eruption 4.000 years ago, leaving the magma chamber intact. In the last 5 years, it’s been accessible for the public to enter, so not only can you see the effects volcanic activity has had on Iceland, you can actually go inside a volcano.

All secured, with my head strapped in a helmet, and my body safely harnessed, we made our way to the top of Þríhnúkagígur. A five-minute hike upwards, after a 45-minute walk through the lava fields. A small gap at the top of the volcano is our gateway into the empty magma chamber. A window washer’s lift is being lowered by a crane hanging over the opening. We’re safely strapped onto it, yet every wobble still sparks nerves in me.

While descending into the humongous chamber down below, you pass walls that were once covered in magma. Now beautifully carved out by the hot lava, variously coloured through minerals and formations which arose within seconds during and after the eruption.

Once the lift reaches the bottom of the chamber (and you have breathed a sigh of relief), you are free to roam around the chamber for 30-45 minutes; stare up at the tiny opening 150 meters above you and gaze at the rainbow-colored rock walls all around.

GO INSIDE THE VOLCANO YOURSELF 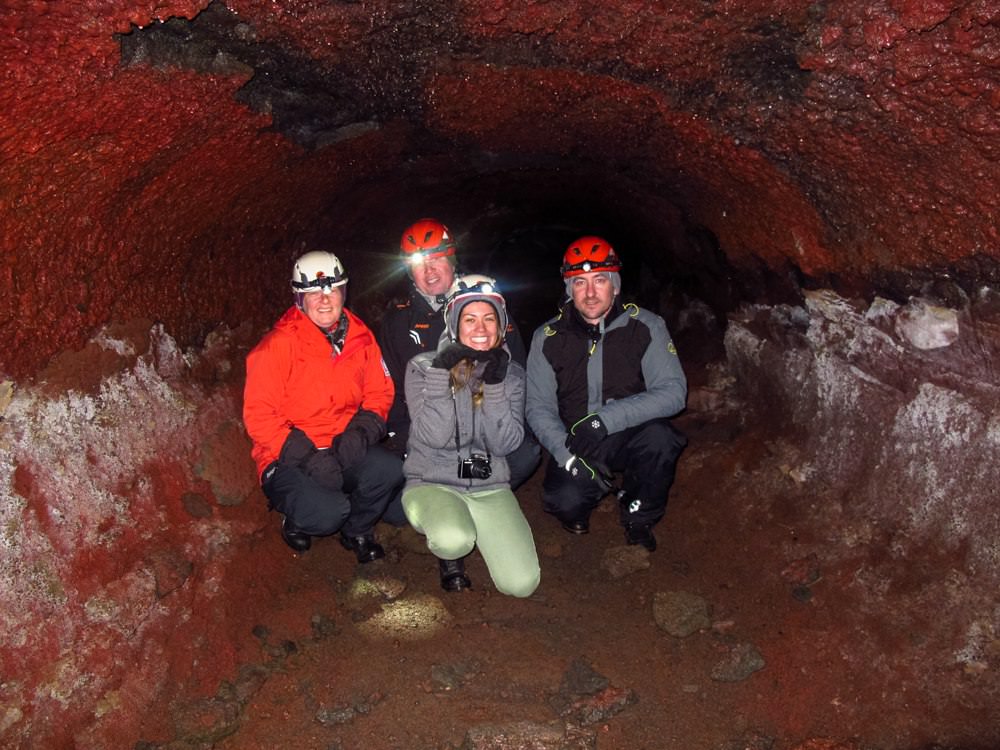 Crawling in the tubes of an overdue volcano is probably something my dad would highly recommend me not to do. Luckily for us, our guide told us that the only time to worry is when the earth starts shaking – and we’d know. So, all safe and sound for a crawl underneath the earth then.

When entering the tube, you wiggle through a few narrow spaces, which lead to rooms in which you can often stand up – and sometimes even have someone on your shoulders (if you’d want). It’s mostly impressive because it really makes you understand how this was formed by nature, not by men. No walls have been broken down for comfort and no paths laid out for ease, it’s all as the lava left it.

During the tour, we created a moment of pitch darkness. A few brief minutes in which we all turned our helmet lights off. Immediate, your pupils start forcefully dilating, trying to cling to the nothingness around you. Your hearing sharpens, drops of pure water falling on the bottom of the cave echo off the walls. Air is crisper, and your sense of smell intensifies. We sat in pitch-black darkness for roughly ten minutes, listening to our guide telling the tales of an old Icelandic saga. Trust me, it’s so much fun when you’re in such darkness; it allows your mind to run wild with imagery while the story is being told.

Iceland’s air is extremely clean already, yet when we crawled out of the lava tube it felt so thick and humid out in the open. ‘The oxygen down in the cave is probably the purest you’re ever going to breathe,’ we were told, which you do not fully realize until you get out of the cave and the air hits you like a wall of tropical clamminess.

Solidified rainbows and diamond skies. Lava stalactites hanging like chandeliers from the ceiling. Walls partly carved out in a perfect cylinder shape, the imprints of the lava running through the tubes in a compelling motion. Crawling through narrow openings, standing up in spacious rooms, breathing in the fresh air. Going into a lava tube was a major collective of first experiences.

In The Netherlands, the closest we get to any form of mountain are speed bumps. Being able to see volcanoes, let alone being in one, has therefore been such a unique experience. Combining these ‘hot spot’ trips on one day will definitely make for a great geographical experience with a lot of interesting facts about the earth and how it works (plus you’re being lowered in a volcano, how badass is that). 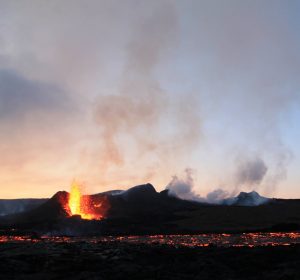