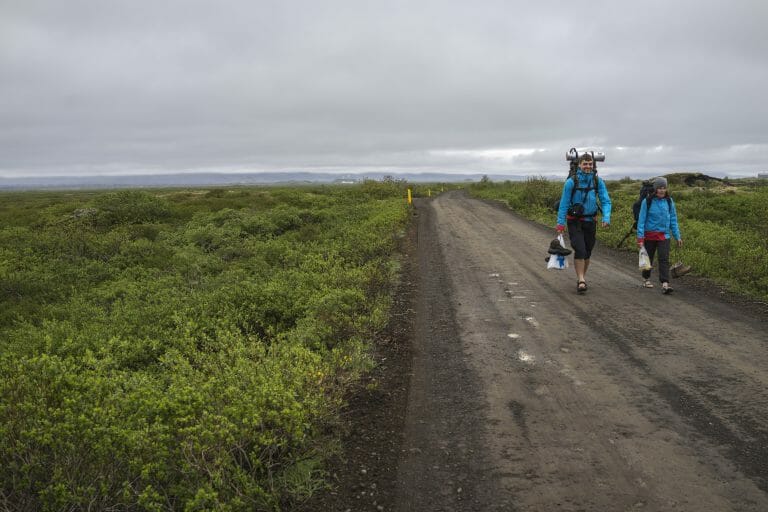 Living in a Hikers’ Paradise

Dust off your backpack and hiking boots, it’s time to discover Iceland on foot. Why, you ask? Because Iceland has some of the best hiking trails in the world! As you probably know, Iceland is a volcanic island filled with mountains and natural wonders, many of which are easily accessible. In fact, Iceland is so crammed with natural wonders that you’re never far away from a great hike.

Hiking through Iceland’s beautiful wilderness is incredibly rewarding, but it can also be dangerous if you’re not sure what you’re doing. If you’re unfamiliar with Icelandic nature, consider taking a guided tour. Available guided tours include everything from a stroll through downtown Reykjavík to a multi-day hike in the Icelandic highlands, contact the What’s On information office for more information.

Before you set off into Iceland’s untamed nature, it’s vital that you prepare for your trip accordingly.

Where do you want to go?

I want to climb a mountain!

Mt. Esjan, the mountain visible from the city centre, is one of the most popular hiking spots for locals in Reykjavík. Just step on a bus and get off at the visitor centre at the foot of the mountain! There are several ways up the mountain, and the most popular one takes you straight up the hill, alongside a babbling brook, and offers a view of the city and the surrounding area. The trail leads all the way to the top, but about an hour’s hike will take you to Steinn, a big rock marking the spot where most people stop and head back.

I want to hike to a waterfall

Why not hike up to Glymur, Iceland’s second tallest waterfall? It used to be considered the tallest waterfall in Iceland, but not so long ago a new one far into the mountains was discovered that’s even taller! Getting there is very difficult, however, so most people stick to Glymur, with an easy hike a short distance from the city. There are a few ways to get to the waterfall, but the easiest one (and the one that requires no fording of rivers) takes about 45 minutes either way. You’ll be rewarded with an amazing view of water thundering down an almost 200m [0.12mi] drop!

I want to hike for several days

The most famous hiking trail of Iceland is called Laugavegur, a hike of approximately 55km [34mi] in the highlands. The hike takes you through two nature reserves, with a wide variety of landscapes and several river crossings along the way. You walk from the red and yellow mountains of Landmannalaugar through lava fields with bubbly geothermal areas to the birch forests of Þórsmörk. The trail is well-marked, with trekking huts along the way, but it’s also possible to camp (and since the huts are often fully booked, it might be necessary!). Usually, people take four days to complete the Laugavegur trail.

I want to see a forest!

Nestled between two glaciers, Eyjafjallajökull and Mýrdalsjökull, and surrounded by active volcanoes, Þórsmörk can be thought of as Iceland in miniature; intersected by fresh glacial rivers, the area is home to rumbling waterfalls, lofty mountains, and a rich array of birdlife. What’s more, the area is best discovered on foot! Following the exclusion of sheep, that love to nibble on birch saplings, Þórsmörk has been transformed into a green oasis. There is an oft-cited joke about finding your way when lost in an Icelandic forest: just stand up. However, since the sheep have moved out, the trees have become very tall, making Þórsmörk one of the few forests in Iceland where it is, in fact, possible to get lost!

I want to go off the beaten track

Hornstrandir in the Westfjords is Iceland’s northernmost peninsula. It’s a nature reserve known for its dazzling cliffs, rich birdlife, and amazing sea views. It takes a bit of travelling to get there, but the hiking opportunities in this area are totally worth it! From Ísafjörður, you can take the ferry to Hesteyri, where there are plenty of hiking options. And the best thing is, the area is the natural habitat of the arctic fox. In isolated, uninhabited areas like Hornstrandir, arctic foxes feel more at ease around humans and are therefore easier to spot.