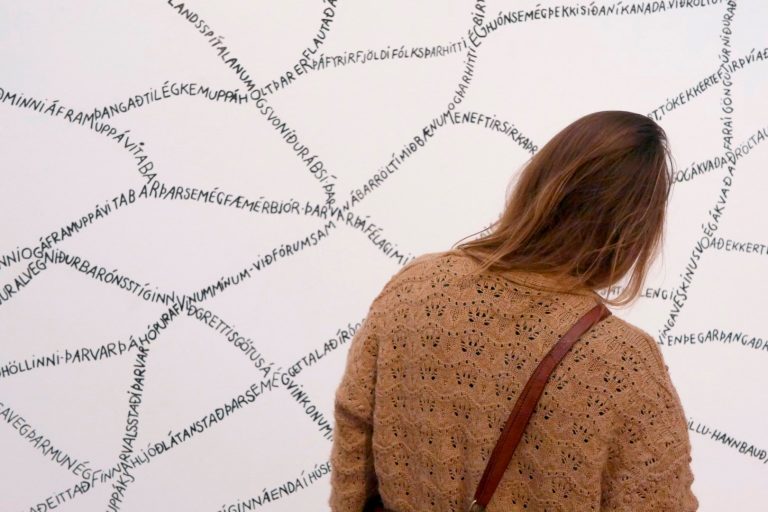 Opening on October 15 at the National Gallery of Iceland is an exhibition of the works of South African photographer and visual activist Zanele Muholi. Muholi‘s powerful images capture the struggle for the rights of black lesbian, gay, bisexual, trans, queer and intersex people in the artist‘s home country. Muholi gives a voice to those who have to battle daily for recognition of their identity.

The Icelandic phrase ‚jæja‘ can mean anything or nothing. It means nothing on its own, but it can carry a lot of weight, depending on the context. It can be a word of sympathy, a verbal smirk, or simply something to say to fill an awkward silence.

Sculptor Guðjón Ketilsson channels this nuance into his new exhibition, Jæja. He creates works of art out of ordinary or mundane objects and gives them a new context, so their meanings change. Traditionally, he has created works composed of found furniture that he has treated in his own unique way, finely polished wooden objects that look like little-seen useful objects in a museum, highly detailed drawings of body parts, houses and buildings of all kinds, a collection of junk that he has collected and arranged as a whole, photographs of arranged objects and clothing – all kinds of clothing carved in wood, such as shoes, loincloths and hats.

Translated as Up and Down, this exhibition focuses on contemporary art in the Nordic region and features the work of around 30 artists from the Nordic region, Iceland, Canadian coastal areas, and the Pacific Northwest in the U.S. The artwork relay ideas related to the North: popular perceptions, climate change and environmental crisis, and the painful history of colonization of Indigenous peoples.

The exhibition is a collaboration between three art museums, the Portland Museum of Art in the state of Maine in the USA, the Bildmuseet in Umeå in Sweden and the Reykjavík Art Gallery in Iceland. There, 30 artists show new works that deal with the changes that are taking place in society, nature and life in the Arctic at the beginning of the 21st century, and which are largely caused by climate change. The exhibition travels between partners from February 2022 to October 2023. It opens at Hafnarhús on October 13.

Video artist Sigurður Guðjónsson will represent Iceland at the 2022 international curated exhibition Venice Biennale. Known for his voluminous video works where image, sound and space form an unbroken whole, Sigurður has made a name for himself in Iceland as one of the leading contemporary artists. He mainly focuses on the functionality of various equipment, where the viewer is lured into a world of soothing repetition, rhythm and order, and the boundaries between the human and the mechanical become blurred.

The exhibition in Hafnarhús, which opens on October 20, presents the artist’s new and older works that introduce Sigurðar’s unique artistic creation to the audience.