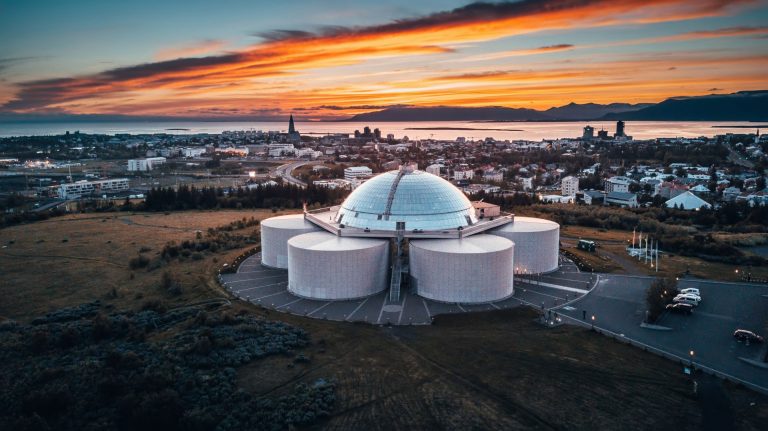 A Visit to Perlan – Wonders of Iceland

On a sunny, cold afternoon in February, I made my way to Perlan, the pearl-shaped landmark overlooking Reykjavík, to check out their Wonders of Iceland exhibition. Visiting the museum last in 2017, I was excited to see the changes and extensions to the exhibit area. Also, I was curious to experience the brand-new planetarium, Iceland’s first and only.

At the entrance, I was greeted by an employee who gave me my ticket and explained to me that the planetarium show would start in 20 minutes, and that I had time to discover the first part of the Wonders of Iceland exhibition in the meantime. The room he pointed me to would take me about 10-15 minutes.

This first room of the Wonders of Iceland exhibition is filled with information on volcanoes, geothermal energy, tectonic plates, and lava rocks. A model of Iceland is placed in the centre, with beautiful footage of eruptions, geysers, mud pots, and steam vents projected on it. Lights and sounds turn this room into an immersive experience. The information is basic, but it is a nice introduction to aspects that are important for a volcanic island like Iceland.

Next, I entered the large dome-structured planetarium, located right next to the exhibition area. A big starry night sky with aurora was projected overhead on entering. We would get to see two shows here. The first show is called Lost in Time and it shows you how Iceland was formed, and gives a bit of information on volcanoes, northern lights, geothermal energy, waterfalls, and glaciers.

The second show, Áróra, is a lot more exciting in my opinion. In this feature, Áróra, the goddess of dawn and the northern lights, takes you on a journey and gives you all kinds of information about the northern lights. I especially liked the part when the aurora on Saturn and Jupiter were shown. Also, the mythical explanations for aurora around the world were interesting. The show ends with beautiful footage of aurora in Iceland. The show is well put together, the screen is impressive with movies shown in 8K, and the seats are comfortable.

The origin of Iceland and Látrabjarg bird cliff

I went back to the exhibition area, because it had a lot more in store for me. The entire history of Iceland, both geologically and culturally, is depicted there. The exhibition has a nice set-up and the information given is interesting and easy to follow. I learned some new things, for instance about the small deer that lived in Iceland 3.5 million years ago, or the fact that two species of arthropods are believed to have survived for millions of years and are Iceland’s oldest continuous inhabitants. There are several smaller rooms in the area, one dedicated to lake Mývatn in North Iceland, and one that shows an interactive video about Icelandic underwater life.

The real eye-catcher in this part of the exhibition is the 10m-high replica of Látrabjarg bird cliff. Originally located in the Westfjords, this cliff is a good second best for people who don’t have the time to travel that far out of town. You can see puffins and other seabirds nesting on the huge cliff, and augmented reality “coin binoculars” give extra information and project birds flying around.

At the end of this exhibit area, you will find two TV screens with information on the real ice cave that’s coming up next. After a short introduction on ice caves, a guide tells you to zip up your jacket because it’s -10ºC inside, and then takes you to the entrance of the cave. After a warning that the cave is not for those who suffer claustrophobia, you can go in. What follows is a man-made ice cave, with real ice you are allowed to touch. The colours of the ice are impressive, and it’s interesting to see the different layers and shapes of the ice.

The cave is not long. It will take you about 10-15 minutes to walk through it, but that’s okay since it’s indeed pretty cold inside. The cave is designed with little tunnels and nooks to make it feel even more real. The guide was present the entire time to answer questions people have and help people with taking cool photos. I think it’s a nifty exhibit, especially combined with the glacier exhibit that you enter immediately after leaving the cave. The glacier exhibit is modern and tells you everything you want to know about Iceland’s glaciers, from the different kinds there are to what life-forms live on the ice.

Everything about Icelandic water

And as if all of this isn’t enough, there’s also a really interesting exhibit about water in Icelandic nature on the third floor or Perlan. There, you learn about different forms of water, like blizzards, waterfalls, glaciers, snowstorms, and floods. But it also puts a focus on the different kinds of life in and around water, from amphipods to midges, and from grasses to moss. They even have live animals like fishes, freshwater snails, and water fleas on display, as well as a selection of moss and other plants.

On the fifth floor of Perlan, you have access to a 360° observation deck. When I was there, the weather was beautiful. It was cold, but also sunny and there was no wind. Little beats the view you get over Reykjavík and surrounding mountains on a clear day. View dials with information about all the mountains in sight are placed on the deck. I could see all the way to Snæfellsjökull glacier. On the same floor, you will also find a coffeehouse and restaurant – the perfect place for a cup of coffee after discovering all the exhibitions.

There’s lots to see and experience at Perlan and I highly recommend a visit. I spend about 2.5 hours there this time, but you can easily spend more. Buy your ticket here.

Be sure to check Perlan out next time you’re in town!