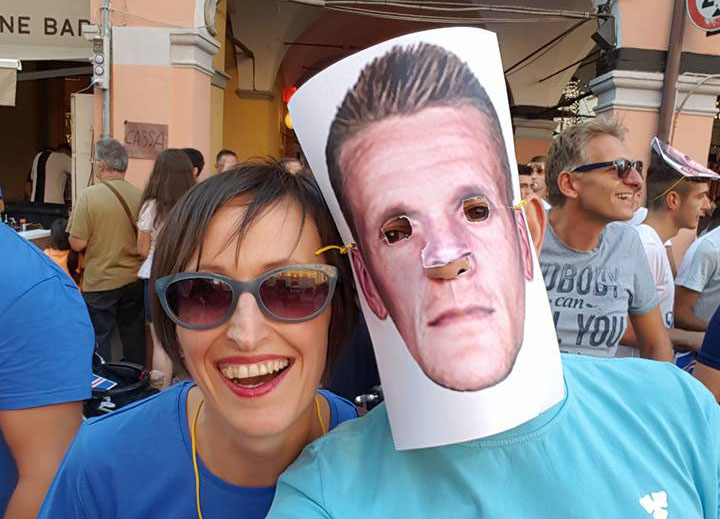 In a scene seemingly out of some surreal comedy, the tiny Italian town Pieve di Cento recently threw a party celebrating accomplished (but rather confused) soccer player Ari Freyr Skúlason. Reportedly the party was attended by about two thousand people, which in a town of 7.000 is quite a bit.

Though he’s a great player, it honestly seems a bit random: he’s Icelandic and he doesn’t play in Italy, he plays in Belgium. The celebration included shirts with his name on it, Icelandic flags, viking helmets, and slightly more creepily: masks of his face…

According to Icelandic news source Morgunblaðið, his popularity in the town has risen steadily over the last few years, since someone noticed that his last name sounds like the Italian swear word “sculason” – also used to proclaim wonder and amazement.

Add to this the fact that the producer of Iceland’s national team costume, Errea, has its headquarters near Pieve di Centro, which means they can easily obtain merchandise with his name on it, and it starts to make (a tiny bit) more sense.

The enthusiasm for the player then culminated at the Euros this year, when Iceland made quite the impression, which lead to the aforementioned party. Apparently the Mayor of Pieve di Centro is evenconsidering making Skúlason an honorary citizen of the town!