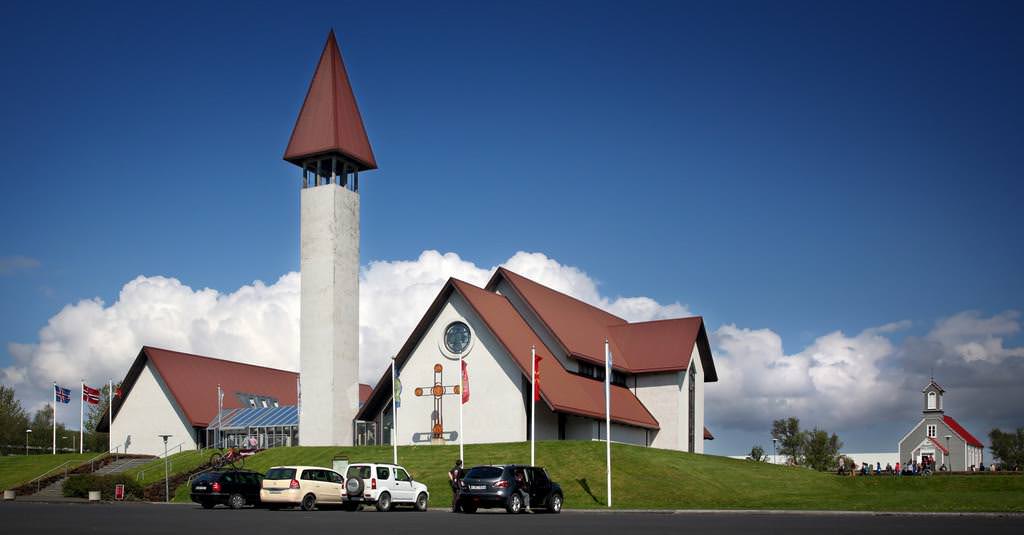 When driving through West Iceland, most tourists focus on the natural spectacles: Snæfellsjökull glacier, Hraunfossar waterfalls, and Langjökull glacier, to name a few. But the area is also rich in history, which is sometimes harder to see.

West Iceland in the Sagas

The area around Borgarfjörður was the setting for one of Iceland’s most celebrated medieval sagas: Egils saga. Skallagrím, Egil’s father, settled in the area during the early settlement period. He later doled out land and farms to different friends and family arriving from Norway. Egil began his life as a troublemaker but soon became an important figure in West Iceland from his farm at Borg á Mýrar. You can learn more about Egil and his family’s presence in Borgarfjörður at The Settlement Exhibition.

The Age of the Sturlungs

But about 40 km northeast of Borg is another farm that would become the seat of power during one of the most tumultuous times in Iceland – the Age of the Sturlungs. During the thirteenth century, power in Iceland had come into the hands of about five families. Many battles took place during the middle of the century as these families vied for more and more power. One of these families was the Sturlungs, who lend their name to the period.

After about forty years of unrest, the Norwegian King Hakon IV (and later his son, Magnus) made a deal with the leaders of Iceland, known as Gamli sáttmáli, or the Old Covenant, which put Iceland under the control and rule of the king. This was the official end of the ‘Commonwealth’ era when Iceland had no political leader – but it also put an end to the bloodshed.

One of the major players at the beginning of the period was Snorri Sturluson, a member of the Sturlungs. Today, Snorri is remembered as one of Iceland’s most important writers. Two of the most significant medieval writings are attributed to him. One is Heimskringla or the History of the Kings of Norway, which chronicles the leaders of Norway from the age of legends to Harald Fairhair to Magnus Law-mender, the son of King Hakon.

The other book is known as The Prose Edda, or Snorri’s Edda. Initially intended as a sort of textbook for aspiring poets, Snorri explained some of the Old Norse myths, gods and ancient poetry. It is through his efforts that we know so much about Odin, Thor, and all the other gods and goddesses.

Snorri made his home at Reykholt in West Iceland – an interesting choice at the time, considering its location and distance from the former powerful farm of Borg. And he invested in something the other powerful families did not. He created a centre of cultural power and brought scribes to Reykholt to produce books.

But Snorri was more than an author. He was a clever politician. Around the year 1220, while he was reportedly writing his Edda, Snorri made a deal with King Hakon to convince the other Icelandic chieftains to accept the king’s rule and bring the island under the sovereignty of the Norwegian crown.

He returned to Reykholt but did not keep his end of the bargain. He became lawspeaker at the Althing assembly – arguably the highest public office a person could hold during the Commonwealth period. He began consolidating power, making alliances through marriages and battling other families and even members of his own clan! During this time, Reykholt became the most powerful place in Iceland. Snorri modelled it after other European places of power rather than on the traditional Icelandic farm.

After a few losses, Snorri was backed into a corner. He decided to sail to Norway and appeal to the king again. But it was too late. Hakon could not rely on Snorri and demanded that the chieftain stay in Norway until the king could sort out the mess in Iceland. Snorri disobeyed and returned to Reykholt. He continued his plans for political power, bringing his enemies to court and resuming the battles. But it was short-lived. In 1241, with King Haakon’s backing, Snorri’s enemy Gissur killed the chieftain while he was hiding in the cellar of his own house in Reykholt.

Snorri’s life and legacy are preserved today at Snorrastofa, a cultural centre and museum that is located at Reykholt – where Snorri once lived. In fact, some remnants of his farmstead remain, such as Snorralaug, the geothermal hot pot that he supposedly used. On-site, you will also find an old church and a new church. The old church dates back to the late-nineteenth century, but the altarpiece dates back to around 1500. Reykholt had been the site of a church since before even Snorri’s time.

Snorrastofa is the perfect place to stop in West Iceland to learn more about Snorri’s complicated and fascinating life as both an author and a politician. Peruse the museum, wander the grounds to see where Snorri once walked, take a look in the old church, and take some of Snorri’s work home with you from the Snorrastofa bookstore.

Snorrastofa, however, is more than just a museum about Snorri Sturluson. Concerts, lectures, readings, and more cultural events are regularly held there. Just recently, it hosted a literary conference about American author Henry David Thoreau, who had been a fan of Snorri’s Edda. The new church also hosts regular concerts and festivals. Check out the calendar of events to see if you can stop in and enjoy some of the best West Iceland has to offer.

About 7 km (4 m) from Snorrastofa sits the most powerful hot spring in Europe, Deildartunguhver. The spring pumps out 180 litres of water per second at a blistering 100° C (212° F), and it helps heat many homes in Western Iceland. In 2017, some of the water was redirected into a new geothermal spa called Krauma. With six baths, a steam room, relaxation rooms and a restaurant, Krauma shouldn’t be missed! It is open year-round and is situated right next to the Deildartunguhver hot spring.

The nearest big town to Reykholt is Borgarnes, which sits on the coast of Borgarfjörður. This picturesque town features some interesting museums, a family-friendly geothermal swimming pool, and cosy bakeries, bars and restaurants. Check out our guide for a day in Borgarnes.

Some of Iceland’s most breathtaking natural wonders surround Reykholt. A short drive east is Hraunfossar, a beautiful series of waterfalls spilling out from underneath the ground. The water flows from nearby glaciers. Langjökull is one of the most popular tourist destinations in the area because of its accessibility, ice caves, snowmobile tours, and other activities. Into the Glacier is one of the most popular tours that takes you inside Langjökull.

Near Deildartunguhver is Víðgelmir lava cave, which was created by a volcanic eruption over 1,000 years ago. Víðgelmir is one of many – and perhaps the most well-preserved – caves in the Hallmundarhraun lava field, which spans a large part of the surrounding area. Guided tours are offered most of the year, or you can make a visit as part of a larger tour package.