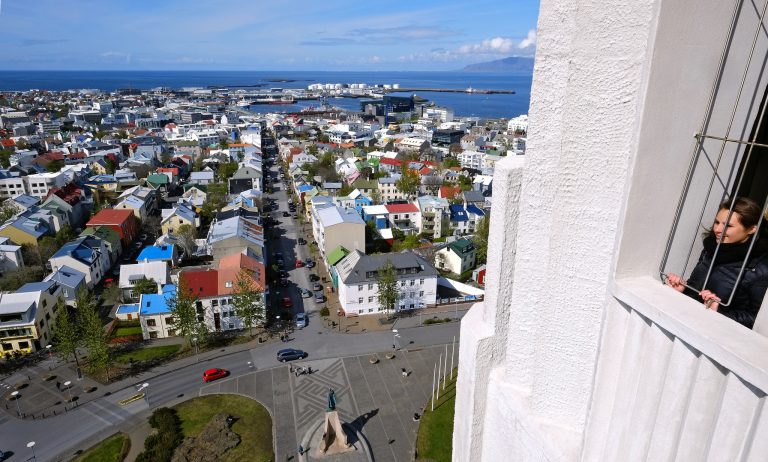 The best way to explore the Reykjavík city centre is on foot. So much of the town’s charm lies in the small, candy-coloured houses, the public artwork and the people on the streets that just driving around the city doesn‘t do it justice (although it’s much quicker so if you’re short on time, that’s something to consider). If you want to get the feel for the city, try our easy Reykjavík city centre walking tour to get acquainted with the Reykjavík spirit. 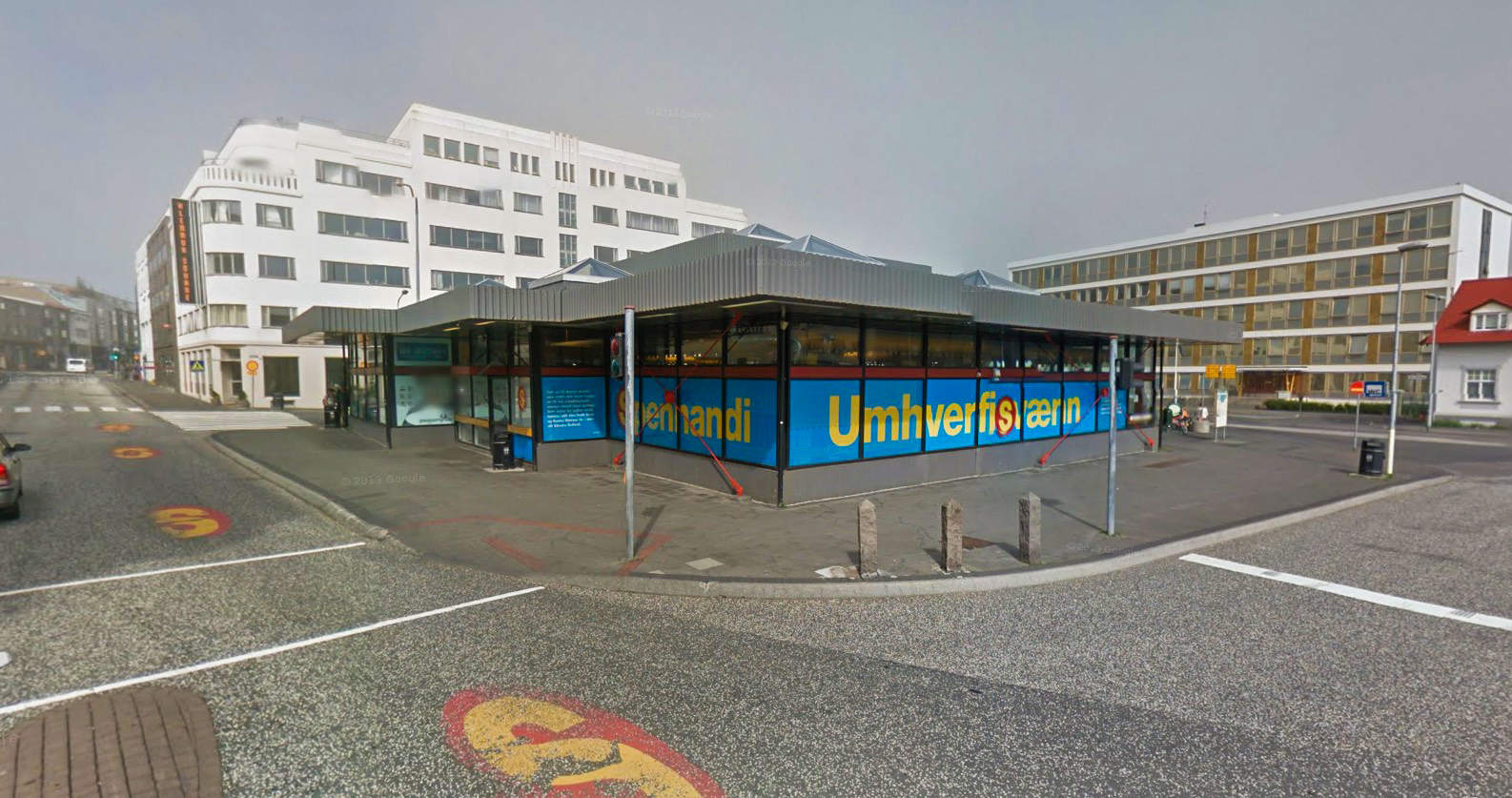 We start our Reykjavík city centre walking tour at Hlemmur, formerly the city’s main bus terminal. The building has a chequered history, a central meeting place for the Icelandic punk scene in the eighties and later on, populated by some of the city’s homeless population. Moving with the times, a food hall will open shortly at Hlemmur, serving some of the most exciting new cuisines in the city.

Laugavegur –  A High Street With a History

From Hlemmur, head down Laugavegur, one of the oldest streets in Reykjavik, originally a rural route to Laugardalur from the burgeoning village by the Reykjavík harbour. At the time Reykjavik was barely a town – in 1900, the population was only 6.000 people – and laundry was done the old-fashioned way, carried 6 km out of town, dunked in a geothermal hot spring, washed and carried back, wet and heavy. Today, Laugavegur is lined with shops selling everything from hardware to high fashion! 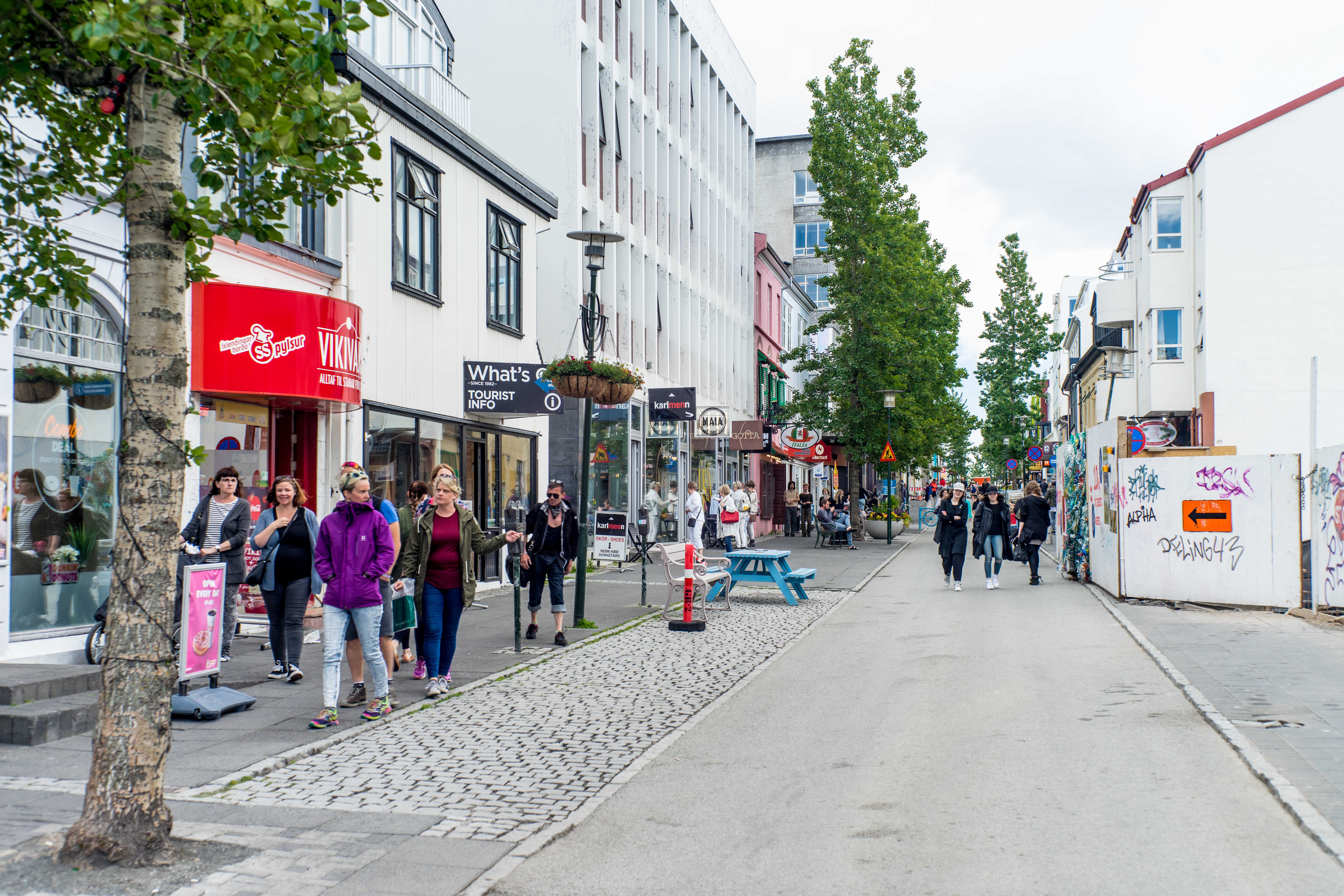 Breakfast – The Most Important Meal of the Day!

When you get to the corner of Frakkastígur and Laugavegur, it’s time to start thinking about breakfast (or some other meal, depending on how late you set off on the walking tour). You might not know it, but you’re actually standing in the presence of greatness. Double greatness, in fact, as you’re close to two of the city’s best bakeries, the refined and classy Sandholt and its hipster younger brother Brauð & co.

For great bread and dainty French cakes, head to Sandholt, but for great bread and rustic pastries, Brauð & co is the way to go. You’ll need coffee to go with your meal, so grab a cup at Reykjavík Roasters or Te og Kaffi, depending on which bakery you choose. 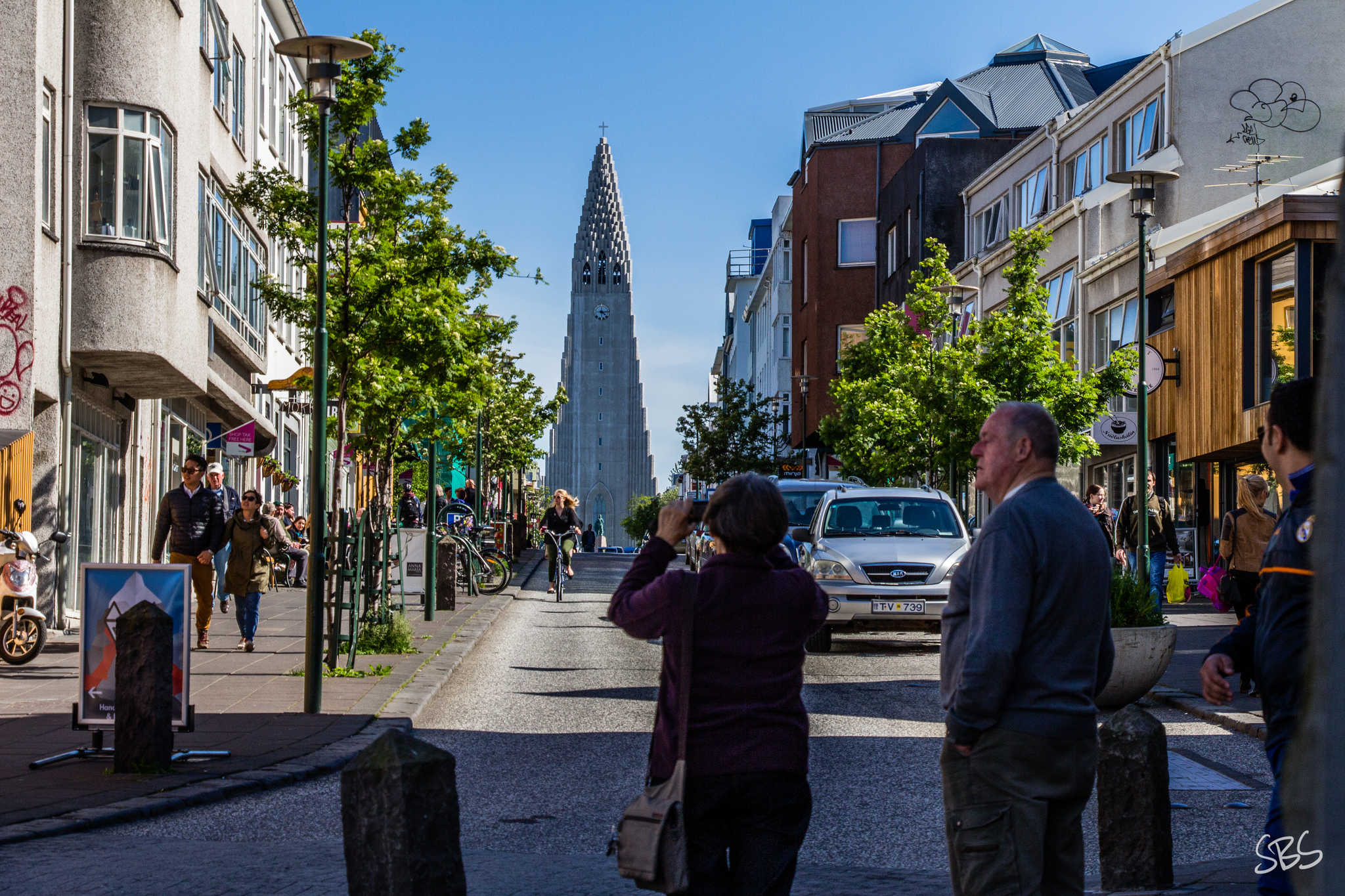 From the Phallological Museum

No Reykjavík city centre walking tour would be complete without a stop at Hallgrímskirkja, the white church watching over the city centre. The church is a stunning example of Iceland’s most prolific architect, Guðjón Samúelsson, inspired by Icelandic nature. As all Sagrada Familia enthusiasts know, the longer it takes to build a church, the better it is, and it took people forty years to finish Hallgrímskirkja! It’s dedicated to one of Iceland’s most distinguished poets, Hallgrímur Pétursson. Be sure to visit the top of the tower for some great views of Reykjavík!

Fun fact, the statue in front of Hallgrímskirkja is of Leifur the lucky, who sailed to North America around the year 1000. If you’re wondering why there’s a Viking statue in front of the country’s biggest church, the statue was actually there first! Not only that but when the statue was erected, the hill where the church stands was actually not in the city centre but a little way outside the town. To see other statues in the city, consider taking a statue walking tour. 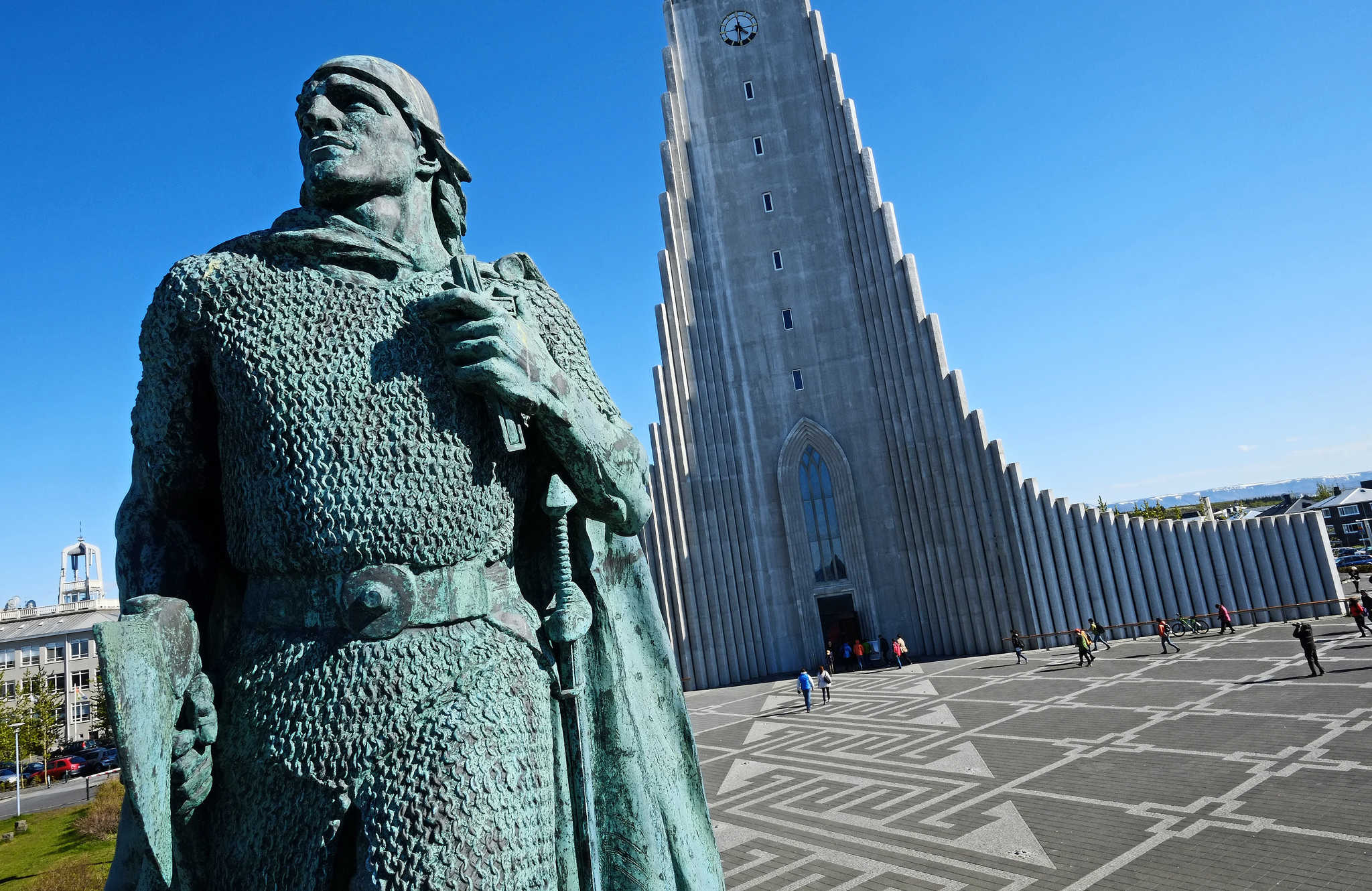 From the Phallological Museum

Skólavörðustígur – Get a Taste Of Some Icelandic Culture!

After climbing to the top of Hallgrímskirkja, head down Skólavörðurstígur. You’ll pass the Einar Jónsson Art Museum which should put you in an artistic mood. That’s good because as you wander down Skólavörðustígur, you’ll pass galleries, ceramic studios, music stores, book stores, and other chances to get a taste of Icelandic culture. Stop by 12 Tónar for a beer and ask the staff for some recommendations, you just might learn about a new favourite artist! 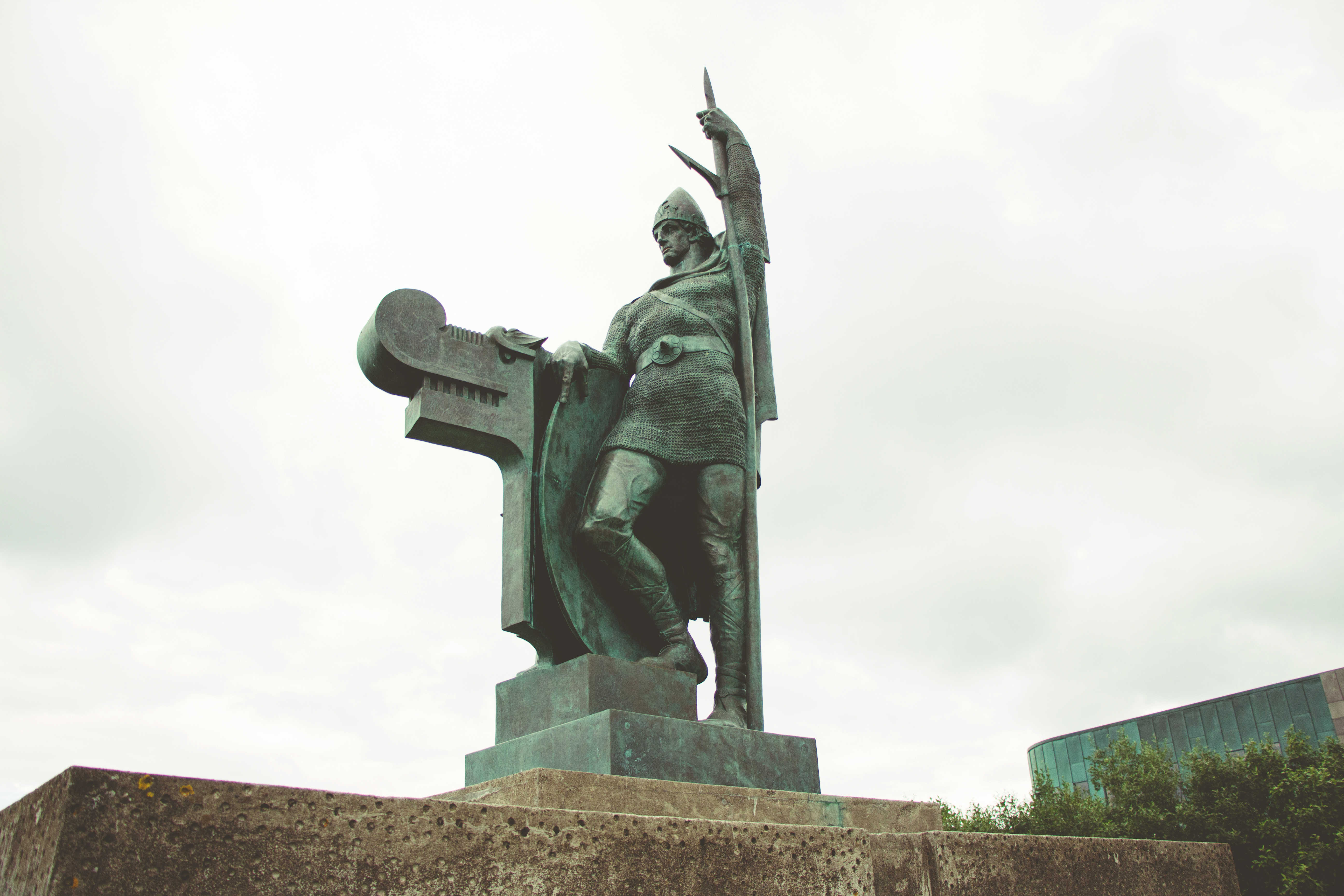 Lækjartorg – Take a Look Around!

When Skólavörðustígur joins Laugavegur, you walk down the street until you get to Lækjartorg square. This is a good time to stop and take a look around. As you look back the way you just came, you see a stately white building which houses the offices of the prime minister of Iceland. The funny thing is that the building was originally built as a prison!

On the left of the building is a green hill adorned with a statue of Ingólfur Arnarson, Iceland’s first permanent settler. If you look even farther left, of course, you’ll see the iconic Harpa concert hall and behind it, the beautiful mount Esjan. 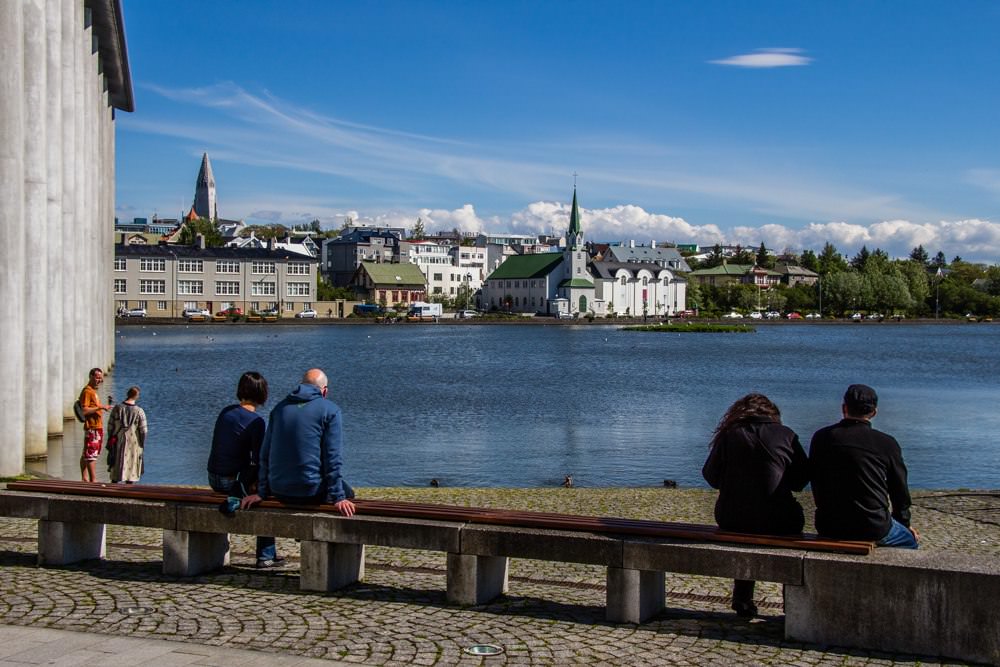 Tjörnin – The Prettiest Walk in Reykjavík

Before we head to the oldest part of town, let’s take a walk around the pond, as the lake in the centre of town is affectionately known. As you walk along the banks of the pond, you’ll pass some lovely old houses, many of them built in the ornate Norwegian style. If you haven’t had your fill of art you’ll pass the Icelandic National Gallery, and the Hljómskálagarður park is lovely, especially in the summer. Walk all the way around the pond, and you’ll reach the city hall, built in 1992. 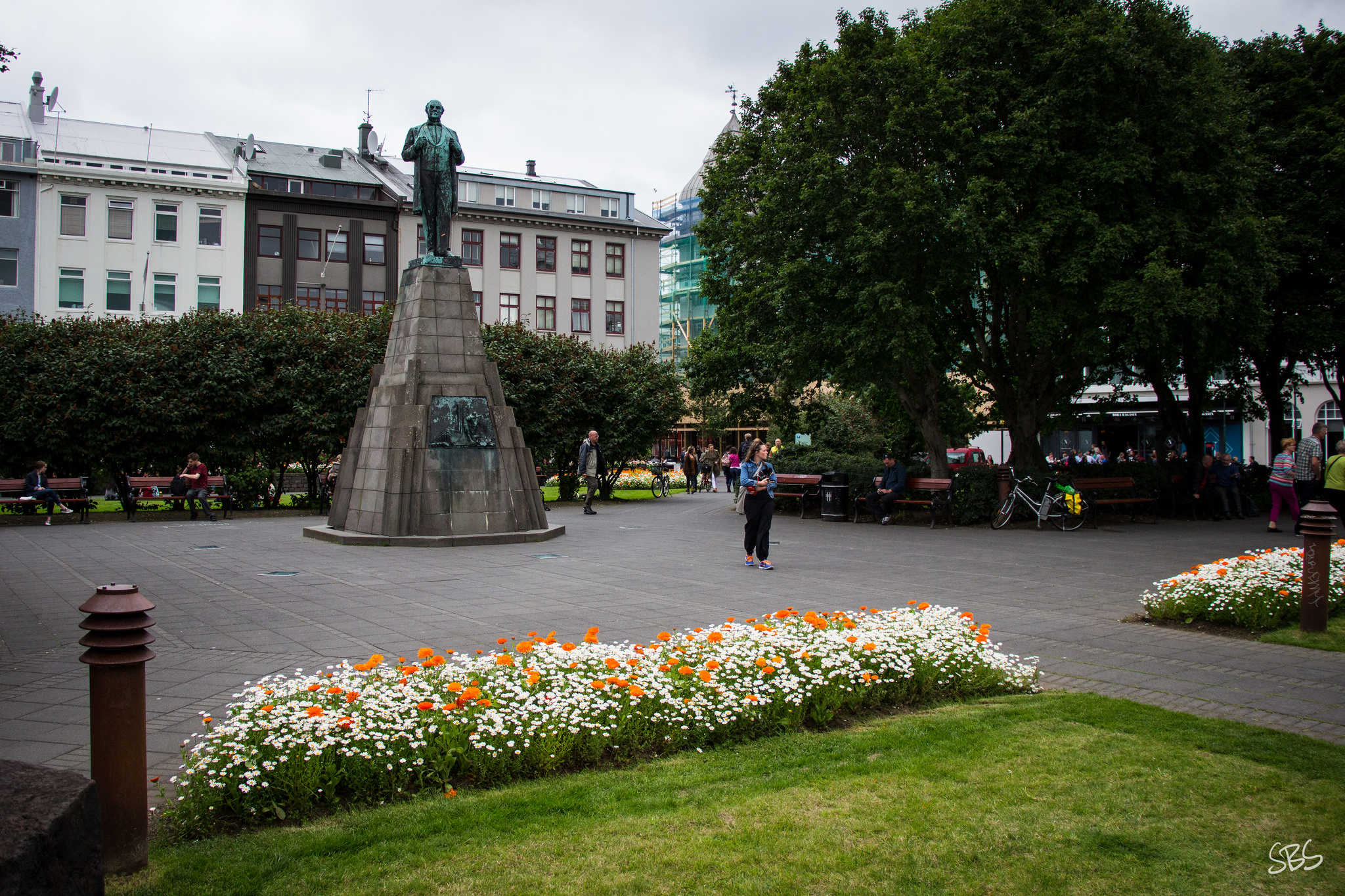 Austurvöllur – The Beating Heart of Reykjavík

The next stop on the itinerary is Austurvöllur square. This is one of Reykjavík society’s most important spots as it fills up with people on good days as well as the bad. On three sides, the square is lined with cafés, restaurants and clubs while the fourth one has the House of parliament. On sunny days in the summer, everyone who has time to spare heads down to the square for a little sun and refreshments in the neighbouring cafés. The bad days in question are the days when Icelanders have had enough of their government’s antics and head to the square in protest. In many ways, Austurvöllur is the heartbeat of Reykjavík’s society. 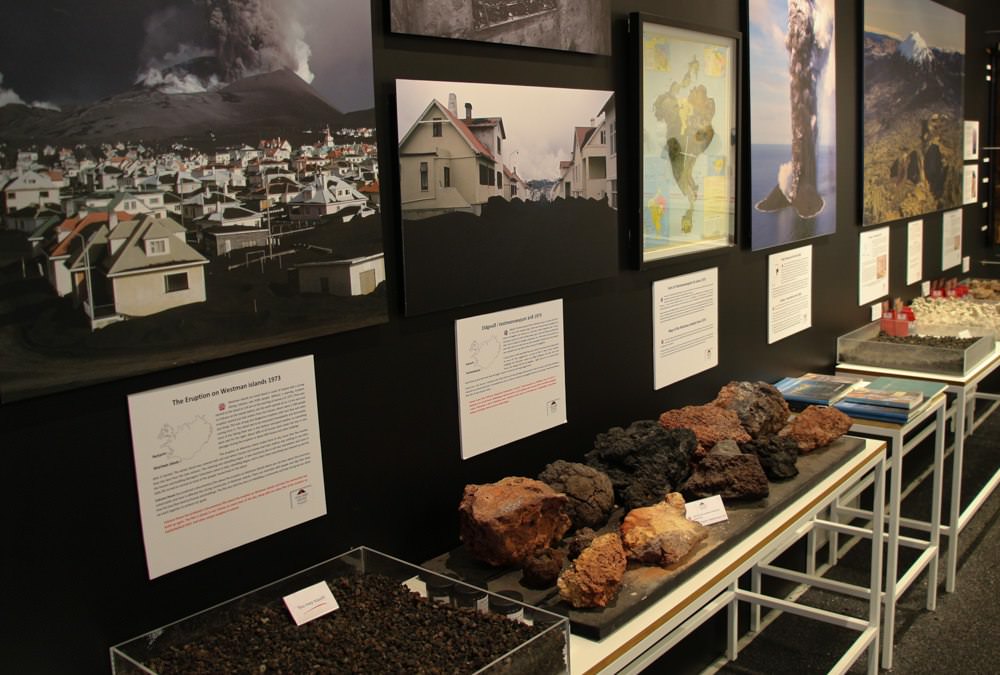 From the Volcano House Exhibition

Leaving Austurvöllur, you head over to the neighbouring square and on towards the old harbour. The area used to house most of the Reykjavík fishing industry, but most companies have abandoned it in favour of the area around Reykjavík’s new main harbour. The old harbour has in the past few years been reimagined, with plenty of exciting new bars, restaurants, shops and exhibitions opening up. Visit the Maritime Museum, The Saga Museum, Aurora Museum or the Whales of Iceland exhibition before settling down to dinner at Matur og Drykkur, a restaurant specialising in reviving old Icelandic cooking methods! 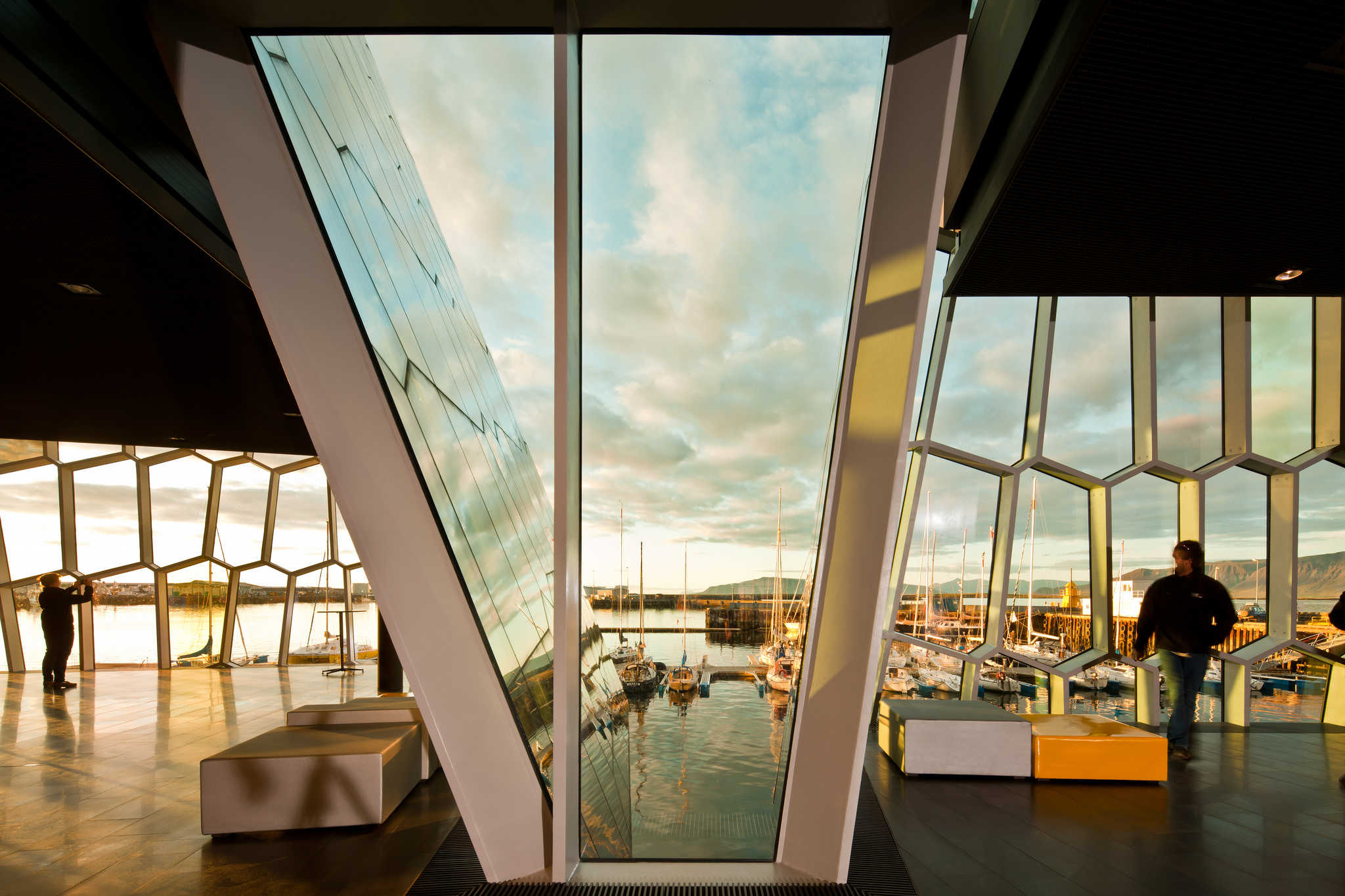 Harpa – A Jewel By the Sea

After dinner, it’s time to head back. If you walk along the harbour, you’ll not only get to enjoy the magnificent view over the sea and Mt. Esjan, but you’ll also pass by the Harpa Concert hall. We recommend taking the time to see a show or a concert but even if you don’t, take a look around. The beautiful glass cover of the building looks as good from the inside looking out as it does from the outside looking in.