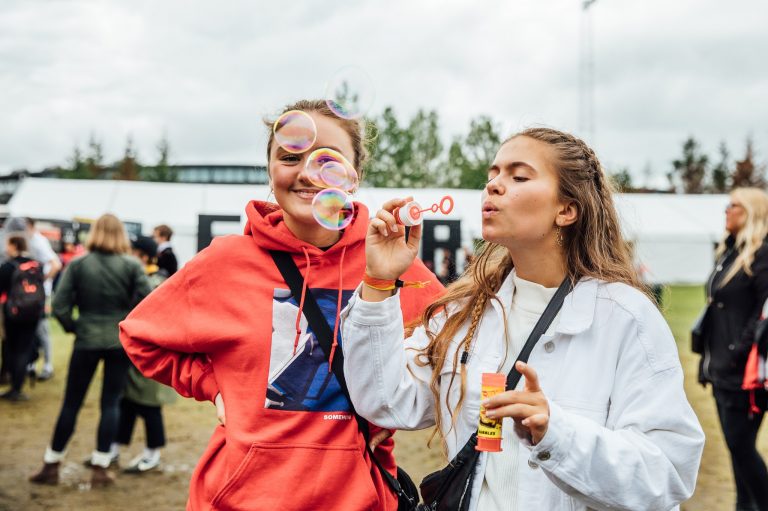 First day of Secret Solstice gave me mixed feelings. It was my first time going to a festival so I was kind of nervous and excited of how it was going to be like. Of course I imagined people being super fun and happy and having a good time. Just like the commercials for Coachella. What I was presented with however was a completely different reality. Arriving at Solstice pretty ‘late’ i.e at 19:30, it took me over an hour to collect my media press ticket. I was sent to two different collection points, each telling me to go to the other. It was chaos. Luckily my co-worker and I managed to get a hold of one staff member who knew what they were doing and in just 2 minutes we were given our passes. Not a good start, to be honest.

Entering the festival grounds, I was immediately presented with an interesting crowd. It ranged from drunk teenagers, hippy middle aged men to families with newborns in strollers. It was quite a sight. At first it was a bit weird for me, I would have never imagined raving to Pusha T or Jonas Blue next to a 7 year old.  But after being there for a while it didnt feel so strange. In a sense all the people that attended the festival represented Iceland in a pretty accurate way. A small country in which everyone, no matter age, gender or background are welcome anywhere. In fact, children can go in for free! I wish I knew that when I was a kid.

Since I arrived at Solstice pretty late, I only got to see a couple of acts. The first being the one and only Pusha T, a last minute entry. He was playing on the main stage, with hundreds of day one fans singing along word by word. You could see that he was used to such a big crowd, making the audience bob their heads along his beats. And yet, I felt like something was missing. There was no true harmony between Pusha T and the crowd. People kept on leaving during his performance. I decided to leave too and head over to see ClubDub, a popular Icelandic duo.

Clubdub’s performance gave a completely different vibe compared to Pusha T. The whole crowd was jumping, screaming and dancing recklessly. Even if their new album was released just a few weeks ago, the whole crowd knew their songs off by heart. It was probably the most fun I had all night. Their producers Ratio, were also super energized on stage and got the crowd hyped. It was almost like a perfectly synced band.

Speaking to Clubdub and Ratio after their performance, they were very surprised that so many people attended their set, especially when it was happening at the same time as Pusha T. I guess this showed how when it comes to Iceland it doesn’t matter if you are a Grammy award winning artist, whats important is making the crowd have fun. And thats exactly what Clubdub and Ratio were all about.

Now the last performance I got to attend was Jonas Blue, a world famous DJ. Another last minute entry, replacing Martin Garrix. Everyone gathered here to see the final act of the night. He played remixes of Spotify’s Top 50, giving the crowd plenty to sing along and enjoy. It was a good cheesy end to the night. Even if the festival didn’t start on the best foot for me, it ended on a pretty good note! Now I’m excited what Day 2 will be like, mostly looking forward to seeing Black Eyed Peas and Hatari taking on the main stage!