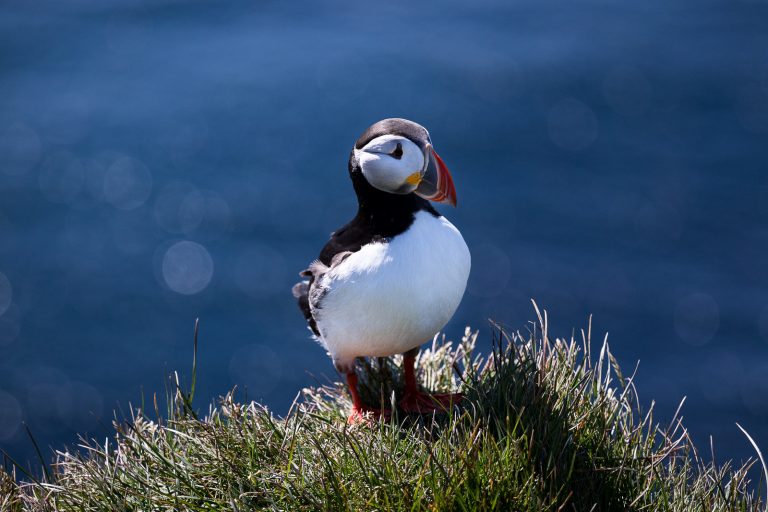 In summertime, puffin colonies are found all around Iceland. The first small flocks arrive in April and the last ones leave in September, but the best months to see puffins are from May to August. Puffins are small, cute, black-and-white birds with colourful yellow and orange beaks. They are easy to spot if you know where to find them. In this article, we will tell you the best places to visit if you want to see puffins in Iceland.

Grímsey is an inhabited island 40km off the coast of North Iceland, touching the arctic circle at its northern point. The island is home to many birds, of which especially the puffin attracts many visitors each year. Millions of sea birds nest on the small island in summer, and it’s almost impossible to not see puffins flying around during your visit. You can take the ferry from Dalvík to get to the island. You can also fly to Grímsey from Akureyri in 30 minutes.

Borgarfjörður eystri is one of the best places to see puffins in Iceland, with about 10,000 pairs of puffins nesting there every summer. The local community developed birdwatching and recreational facilities for visitors at Hafnarhólmi marina, so there are a shelter and wooden platforms from where you can get close to the puffins. You can also get good views of other sea birds, like fulmar, kittiwake, and the common eider.

Just off the coast of the Reykjavík, puffins breed each year on small islands like Akurey, Lundey, and Engey. Most whale watching companies also offer puffin watching tours, and besides, you will often spot puffins in the distance if you are going on a whale watching tour, since they swim in the same ocean. For puffin spotting, it’s best to be on a small boat and to bring binoculars. Puffins are tiny, and the closer you can get to them, the better the experience will be. Next to puffins, common sights during these tours include arctic terns and the great skua. It is a convenient way to see puffins in Iceland!

The Westman Islands are an archipelago of 15 islands off the south coast of Iceland. Only Heimaey is inhabited. You might have heard about this island because of the 1973 volcanic eruption. The island recovered since then and visiting Heimaey is a popular tourist activity, not in the least because of the puffin population. Nesting here is one of the biggest puffin breeding colonies in the world. You can spot puffins at Kervíkurfjall mountain, the cliffs of Herjólfsdalur and Heimaklettur, and along the coastal track to Stórhöfði, the southernmost point of the island. The cheapest way to get to Heimaey is by ferry. You can also fly from Reykjavík Airport to Heimaey in about 25 minutes.

If you want to venture out of the city, head to the Westfjords. The bird cliffs at Látrabjarg are famous for being an excellent bird-watching location. The high cliffs offer birds a safe home, protected from foxes and other predators. Therefore, millions of birds gather there for the nesting season. Of course, one of the species nesting here, is the puffin. Puffins are flying around the cliffs, swim in the ocean, and sometimes you can even already spot them in the parking lot. Next to puffins, you can see northern gannets, guillemots, and razorbills. From Reykjavík, it’s six-hour drive to get to Látrabjarg bird cliffs, and in the Westfjords there are a couple steep gravel roads.

Papey is the largest island off the east coast of Iceland, though with a size of 2 km², it’s still quite small. It was populated until 1966, and there still is a lighthouse, a house, a little wooden church from the beginning of the twentieth century, and a weather station on the island. These days, it’s a safe heaven for birds who nest at the island in summertime, including a large colony of puffins. A boat tour from  Djúpivogur and the ride takes about 50 minutes one way.

We hope you will see many puffins in Iceland this summer!