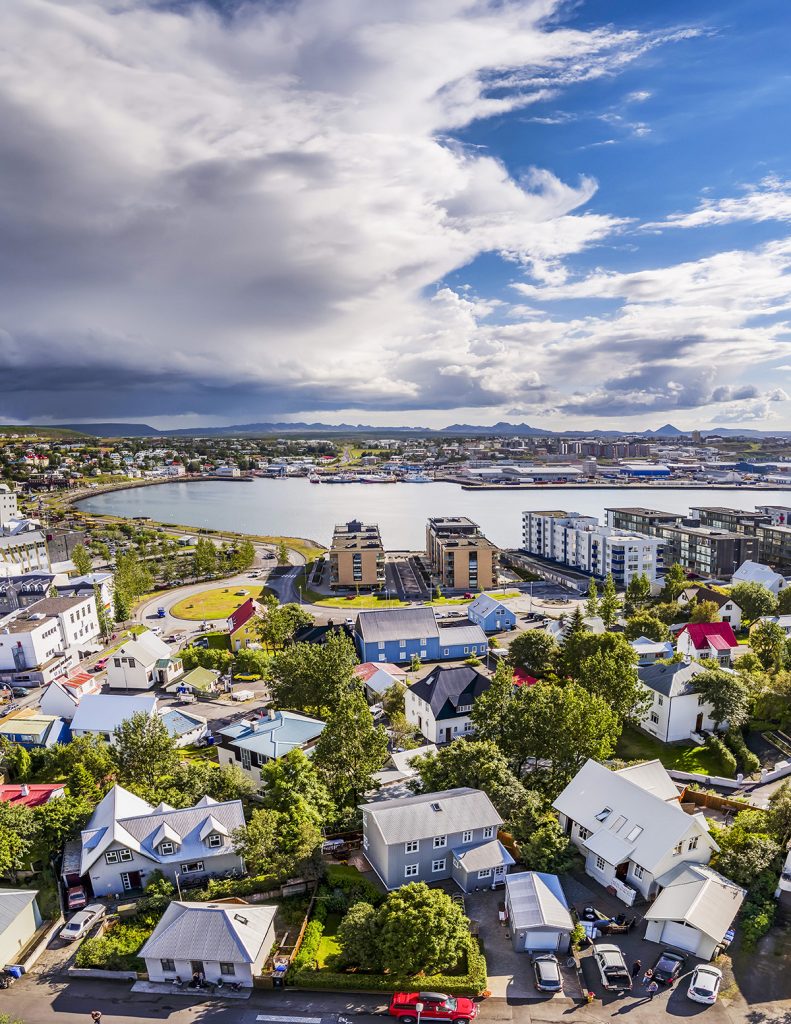 Spending a Day in Hafnarfjörður

Although it is the third largest town in Iceland, its small population of nearly 29.000 people makes Hafnarfjörður a small town with its own unique culture. Surrounded and covered by lava fields and absolutely stunning landscapes, Hafnarfjörður is a must for anyone looking for a beautiful Icelandic town. As an added bonus, Hafnarfjörður is only a short drive or a bus ride away from Reykjavík. 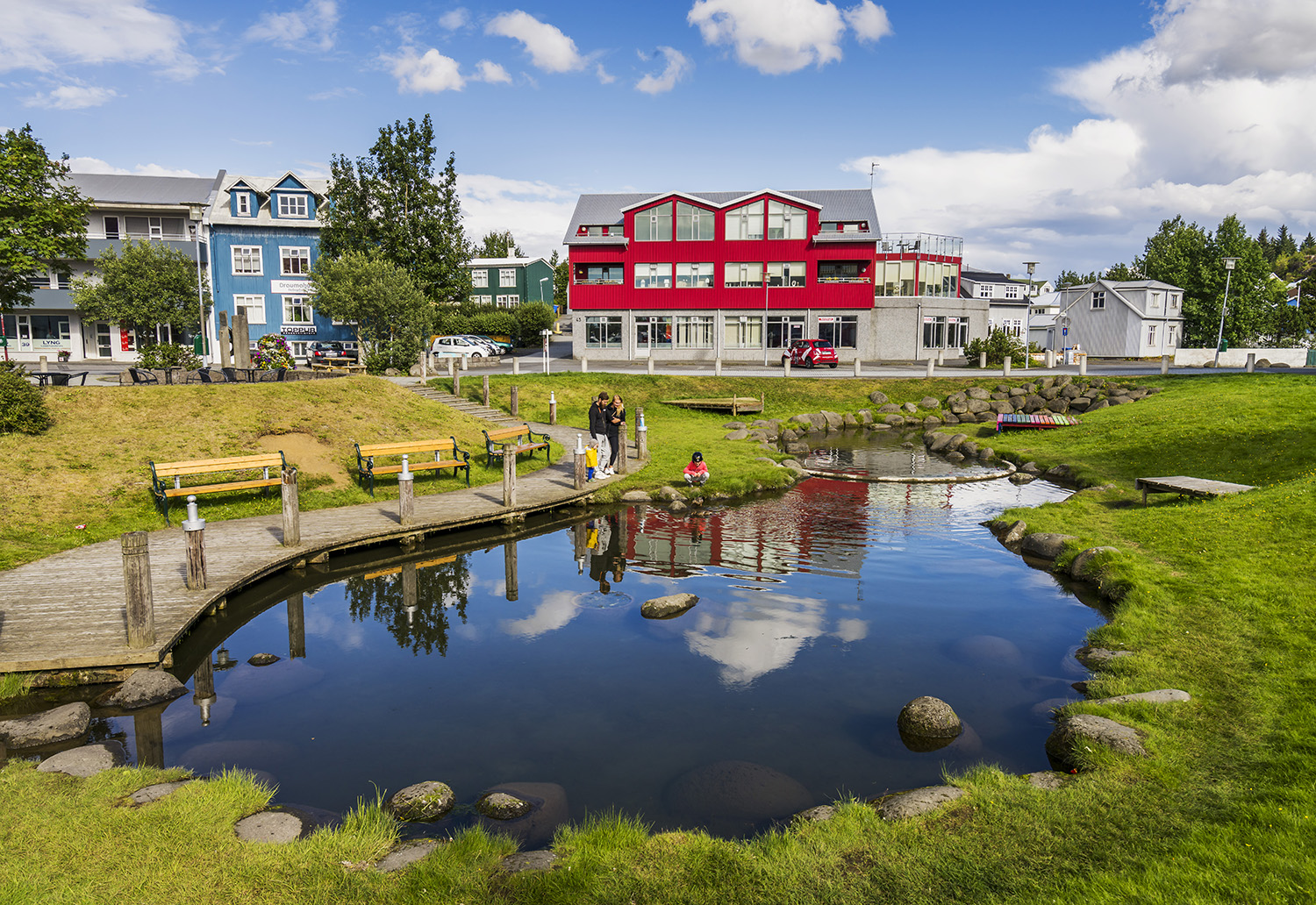 A (Short) History of Hafnarfjörður

Hafnarfjörður’s settlement (transl. Harbour Fjord) dates back to the settlement of Iceland, over a thousand years ago, due to its natural harbour, perfect for trade.
In fact, Hafnarfjörður was the nation’s busiest trade centre, bigger than Reykjavík, for centuries, although it flourished after the Danish trading monopoly came to an end in the late 17th century. During this period Bjarni Sívertsen, a son of poor Icelandic farmers who grew up to be a successful merchant, helped the town do well with its fishing operation and became known as the “father of Hafnarfjörður”. Hafnarfjörður became its own municipality in 1908 which allowed the town to grow even further. The old houses and buildings from that period give the town centre an irresistible charm.

Over the course of the 20th century, particularly after World War II, Hafnarfjörður continued growing into the bustling town it still is to this day. Advancements in fishery and an aluminium smelter a short distance from town have helped grow the town’s economy, breathing more life into it. Hafnarfjörður has, in fact, become iconic not only for its scenic surroundings of rough lava but the laid-back charm of the town centre with its geothermal swimming pools, cosy cafés, and even a history of hidden people and elves as well (more on that below). 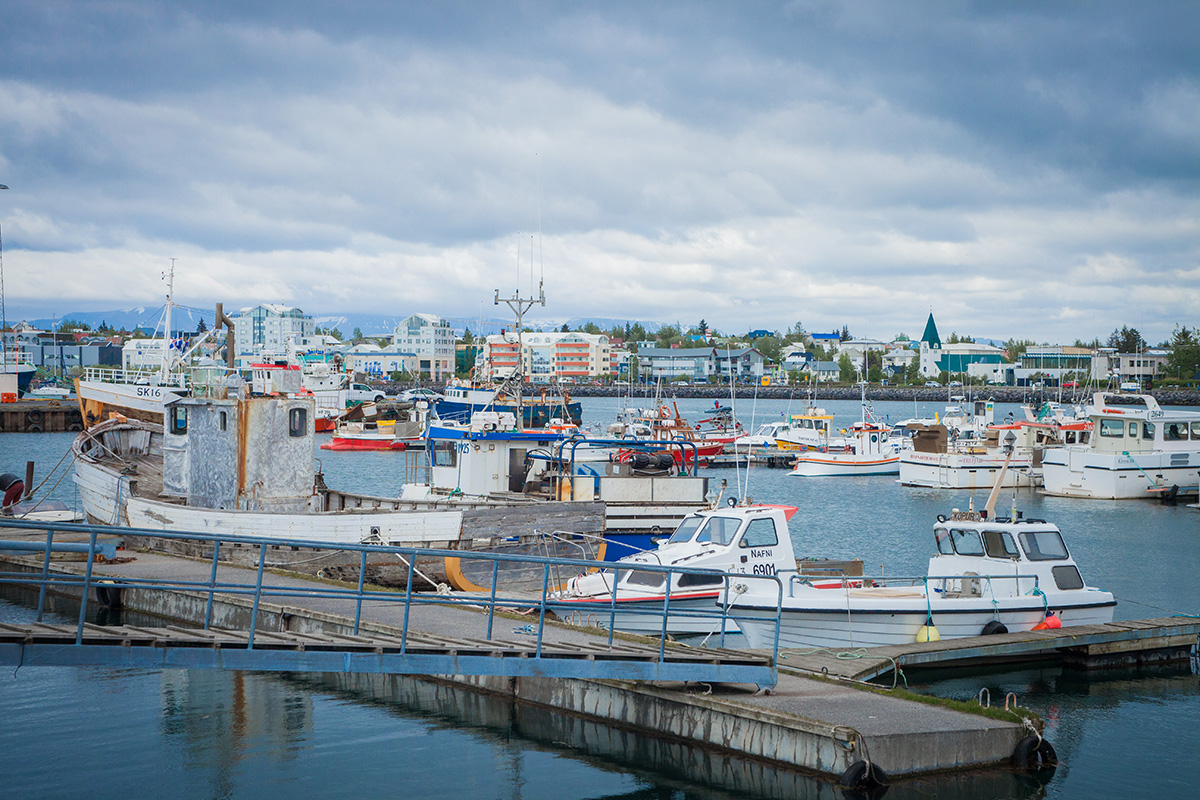 The people of Hafnarfjörður have for a few decades been subject to strange jokes, such as the ones below, in which the residents are depicted as silly simpletons. Originating from the latter part of the 20th century, nobody wants to take responsibility for them,  least of all the neighbouring town of Garðabær, whose mayor once issued a statement on the matter. Regardless, Icelanders all around the country continue to enjoy them to this day, especially the younger generation.


Why do the residents of Hafnarfjörður always sit at the front in the movies?
Because they want to be the first to see the film!

Why do the residents of Hafnarfjörður keep empty bottles in their refrigerators?
So they have something to offer to their guests who aren’t thirsty!

Why do the residents of Hafnarfjörður put out chairs outside their lawns before going to bed?
So the sun can set.

Your Day in Hafnarfjörður

Start your day by stopping by the bakery in downtown Hafnarfjörður. Despite its rapid growth, Hafnarfjörður continues being known as a small town retaining its heart. Despite some newly constructed buildings being mixed in with the classic iron-clad timber houses, Hafnarfjörður still has the largest unbroken neighbourhood containing these corrugated houses. If the weather permits, get your pastry and coffee to go and take a scenic walk through the old town. If you pass by the harbour, look out for the outdoor exhibition of the history of Hafnarfjörður, courtesy of the Hafnarfjörður Museum. 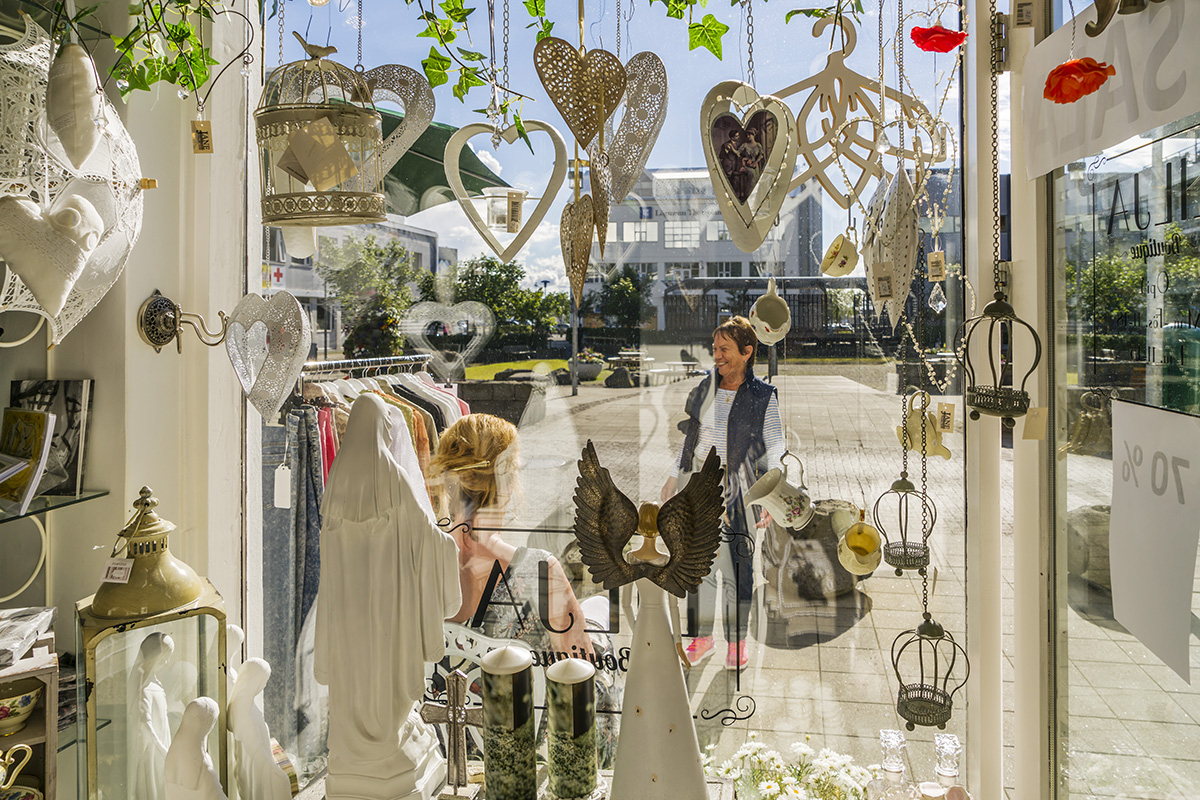 When you’ve finished your breakfast, you can get serious about exploring the town centre, populated with a myriad of little shops, boutiques, bookstores, designer’s workshops and more. The most entertaining aspect of these shops is that most of them are tended to by the owners themselves, who are more than willing to chat about their town. See if they’re willing to tell you a Hafnfirðingarbrandari or two.

Is it time for lunch already?

For lunch, stop by some of Hafnarfjörður’s hottest new restaurants, especially by the old harbour area, which is going through a renaissance these days. There’s also the new bakery/restaurant called Brikk, for instance, just perfect for pastry and food lovers.

After lunch, it’s time to burn off those delicious pastries with some exercise! Hafnarfjörður is surrounded by natural beauty – it’s known as the town in the lava. You can even go hiking in the surrounding mountains, such as mt. Helgafell. It’s perfect for a family hike, since it isn’t too high but rewards you with an excellent view of a flat landscape. 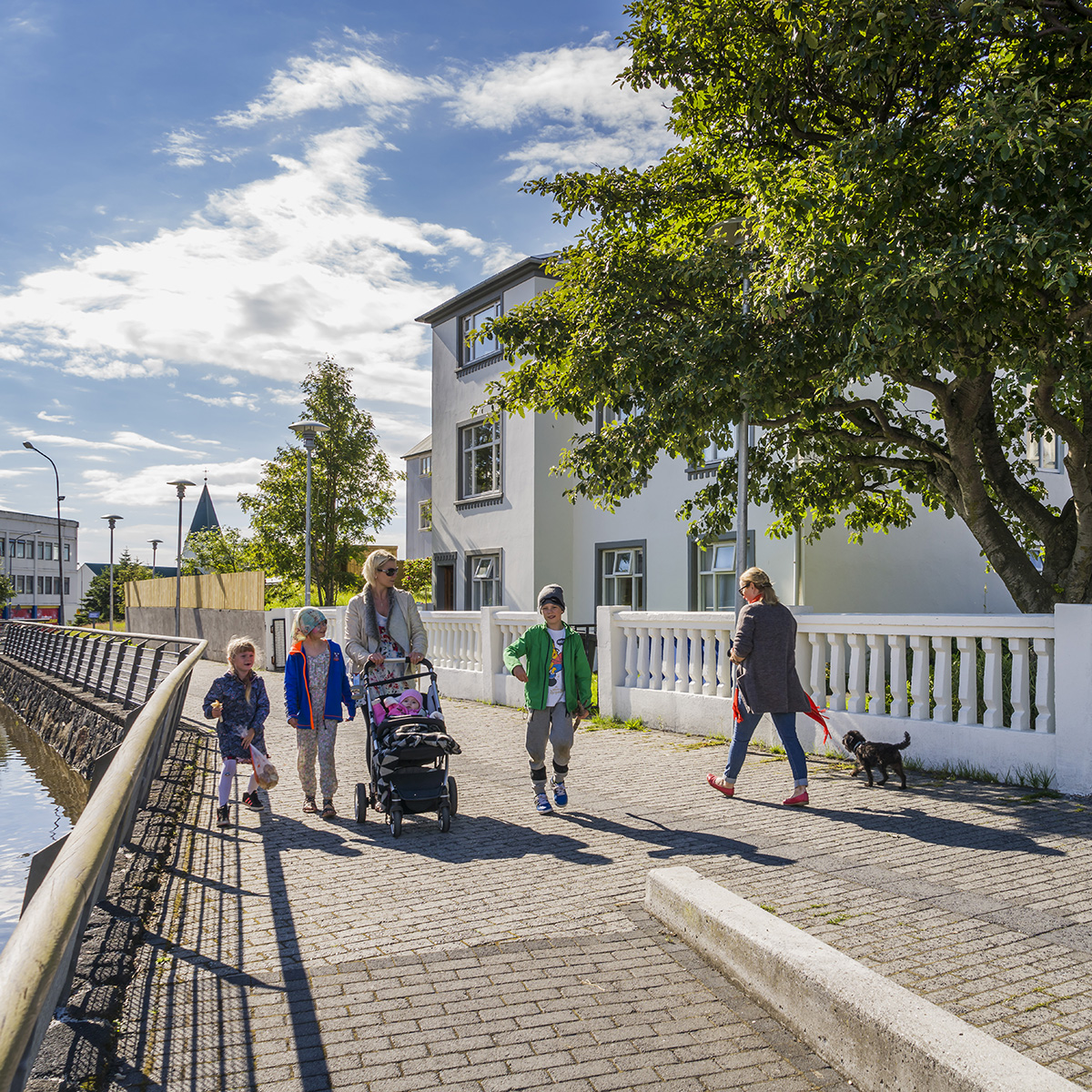 Or take a walk

Hiking and exploring aren’t everyone’s style though, so close to the central area there’s also the Hellisgerði Park, known for its enchanting pond, rocks and small caves as well as being rumoured to be populated by elves and the hidden people of Icelandic folklore. We won’t guarantee any elf sightings but a visit to the park is nice and it’s worth stopping by the elf house as well. Just be careful, disturbing the homes of the folklore people does not bode well for anyone. Although most Icelanders don’t really believe that, they nevertheless wouldn’t want to take their chances.

Or play a game of golf

For those into swinging golf clubs, Hafnarfjörður is home to excellent golf courses such as Hvaleyrarvöllur, regarded as among. This year it opened new fairways, one of which was used for the national championship.

Soak in some geothermal water

After your adventure, it’s time for a swim (or just lounging in the hot tub if that’s more your style). Stop by one of Hafnarfjörður’s lovely swimming pools for a soak or a swim if you’re feeling active. My favourite is Suðurbæjarlaug because of its excellent hot tubs, but swimming enthusiasts have access to a fantastic outdoor pool as well.

Finally, dine in one of the restaurants around the central area. Get pizza if you have kids, although they might just as well love the local seasonal food just as much as you will. After dinner, have a drink or three in any one of the local pubs around town and see if there’s a show going on in local concert venue, Bæjarbíó. 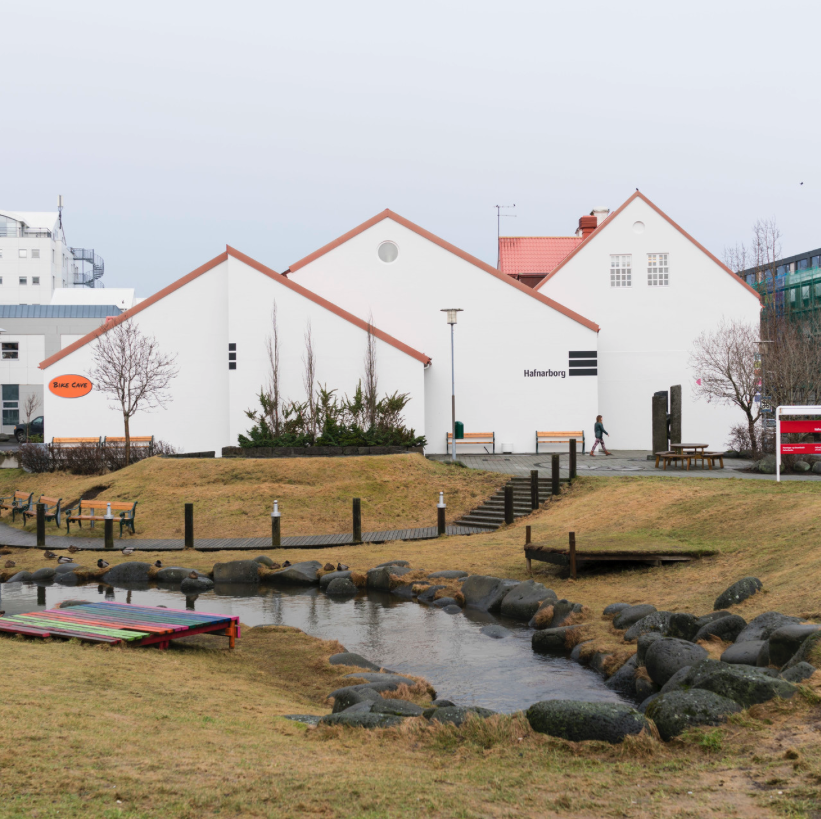 Head back to Reykjavík and tell all your friends about the wonderful day you spent in Hafnarfjörður. 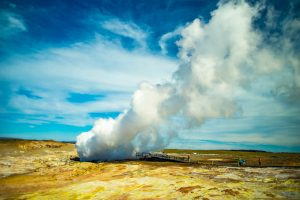