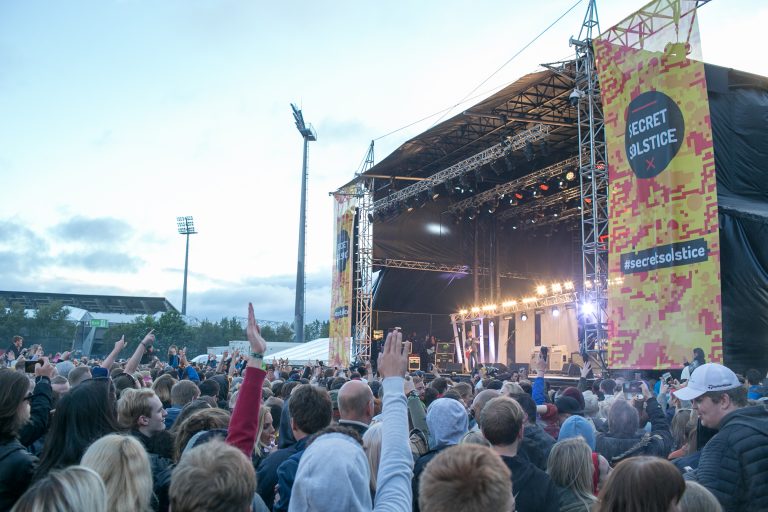 It was the final night of the Secret Solstice festival but nobody was ready for it to end. The Sunday night line-up was looking good and people were making the most of their last night in the verdant Laugardalur valley. Gréta and Tara bravely went out into the Sunday night to tell you all about it. 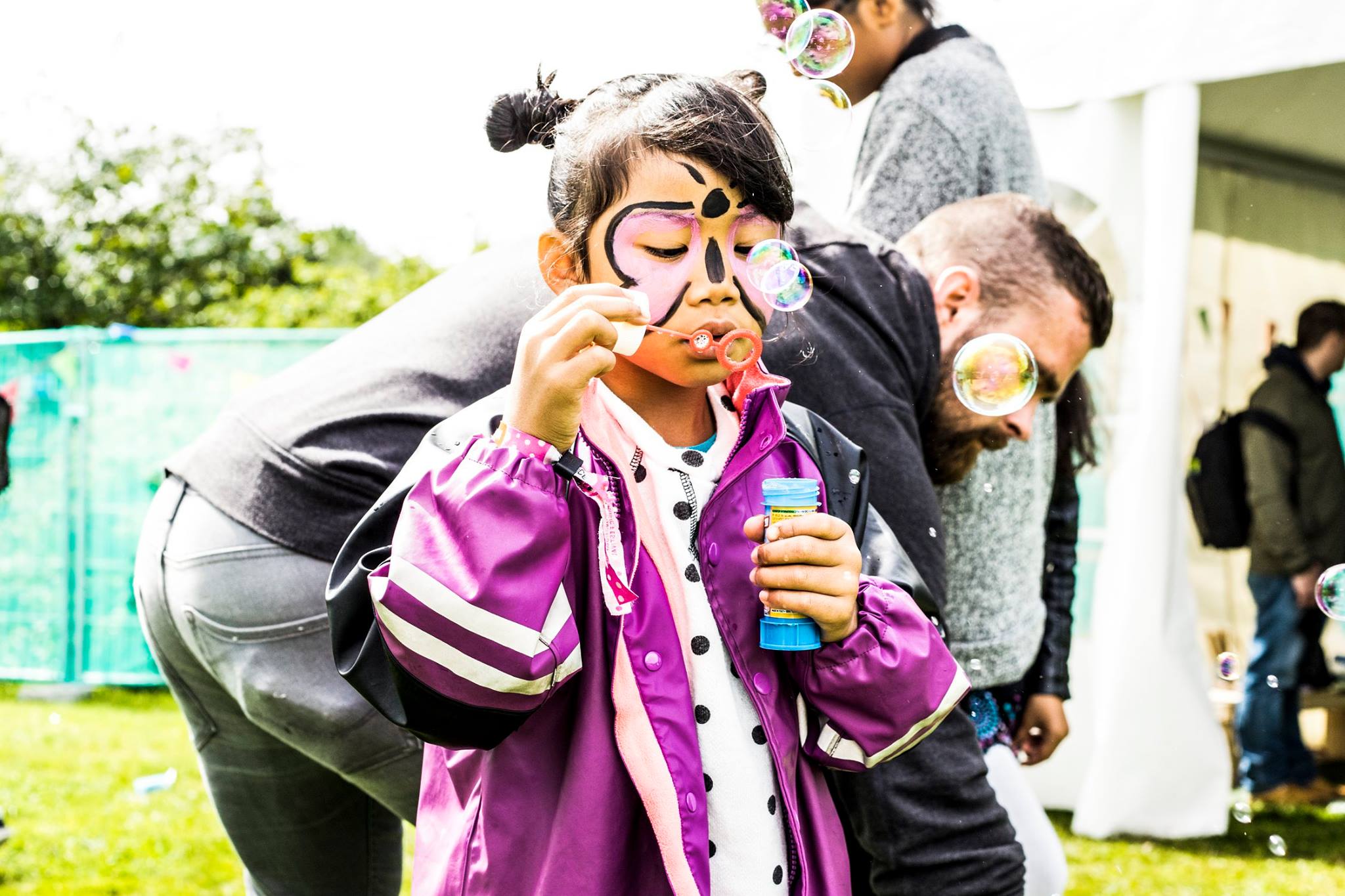 Photo by Lilja Draumland via Secret Solstice on Facebook

Tara – Being a mom, I love to share experiences with my four-year-old daughter Isold, and she was so excited to “party” with mom. The kids’ area at the festival is like a group of children came together to plan activities and then parents customise it to perfection. Where else could my kid get her face painted and get to hug teddy bears, get a tattoo and plant a tree at the same place? There was even a whole tent filled with diapers and wipes and kid -friendly snacks available at the shop.We came to the festival early on Friday and then again on Saturday afternoon and we both could enjoy ourselves there for hours, not minding the weather one bit.

If you don’t have a kid, I’d recommend you either get one or borrow one just so you can bring it to the Solstice Kids area next year. 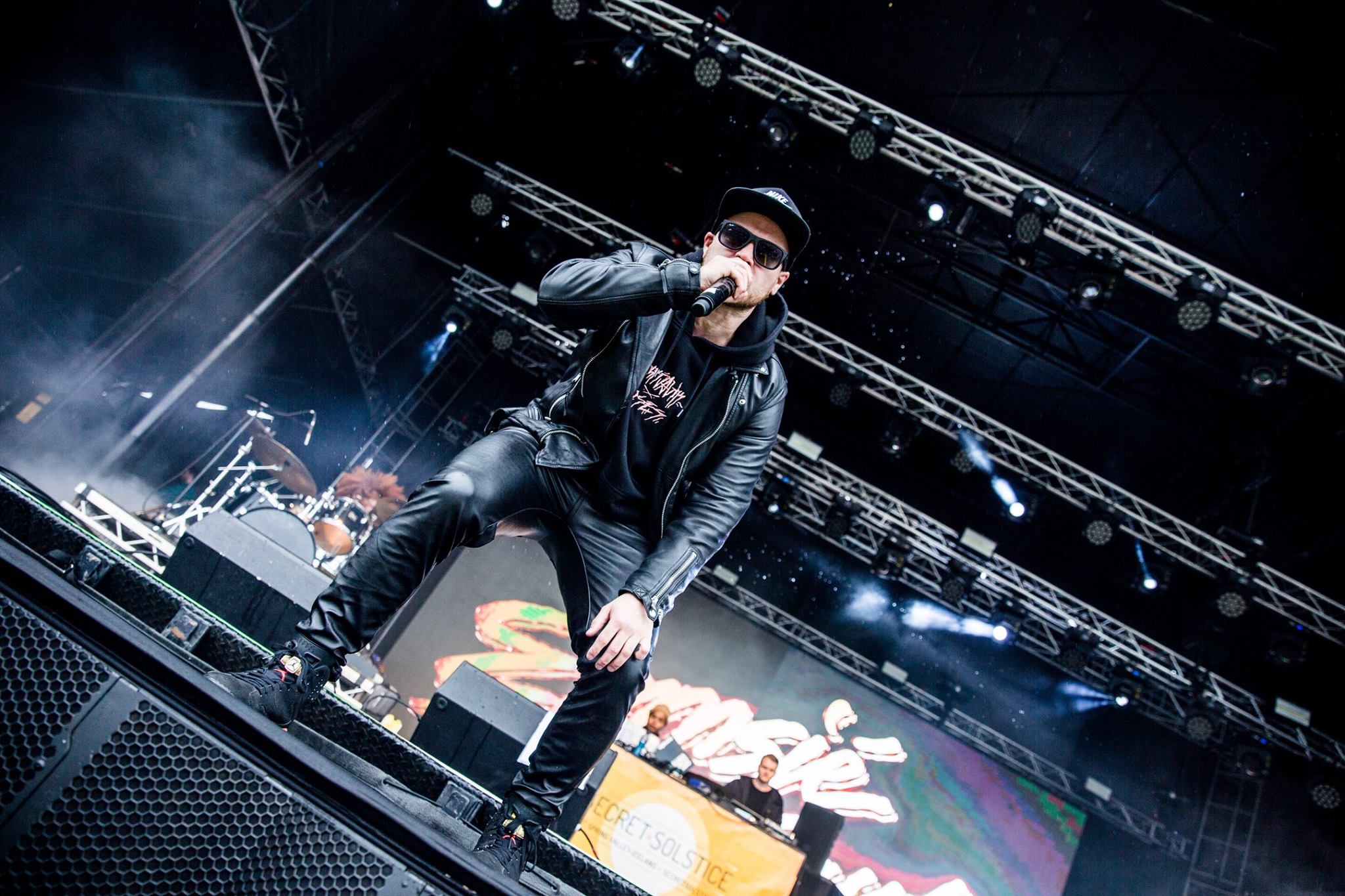 Tara – From the kids area we could hear the Icelandic rapper Emmsje Gauti’s voice loud and clear so we ran to Valhalla stage to see his act. His show probably had the audience with the widest range in age, everyone singing like the rain wasn’t even there. Words are not enough to describe how exactly he reads the crowd and how on point he performs, even the visuals on the big screen were awesome.
I’m a huge fan of the American rapper Eminem and I’m so ecstatic for Iceland having Emmsje Gauti as a prettier version of him.
It doesn’t matter who you are or where you come from, even if you don’t understand him at all, you will love his charming presence and catching lyrics. 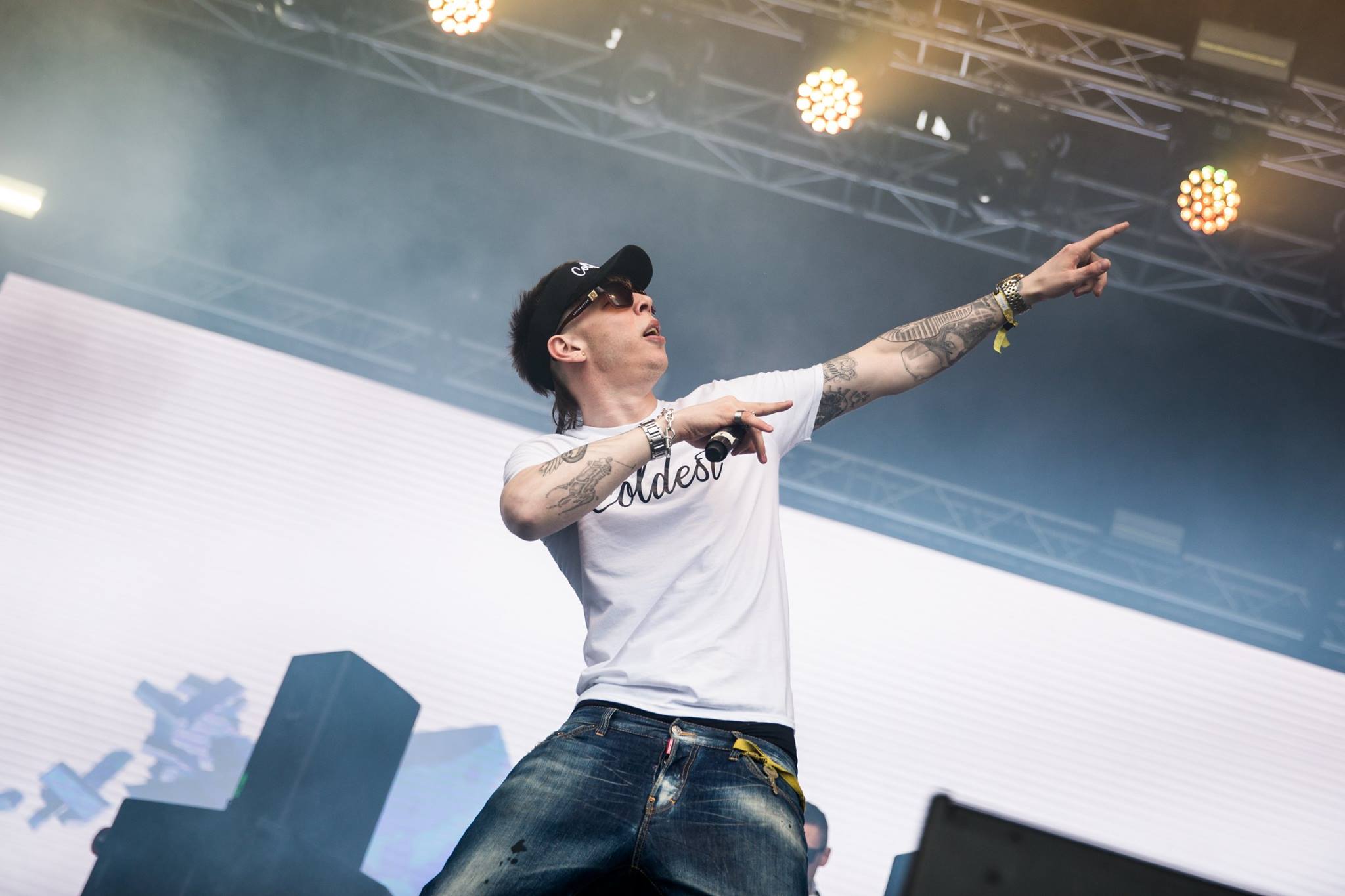 Gréta – By the time Sunday night rolled around, I admit the festival was starting to take its toll. I wasn’t about to let that stop me however since Sunday night had one of the best line-ups of the festival. I dragged myself down to the festival area and let Icelandic rapper Gísli Pálmi have the unenvious task of getting me into the party mood. Gísli Pálmi is a strange creature, ripping his shirt off as soon as he gets in contact with a stage, and usually performing with sunglasses on, even if the concert is indoors. At night. In winter. He takes inspiration from the American hip hop scene, usually rapping about being on drugs, having lots of money and taking more drugs. His music is not exactly always to my taste but I do enjoy his antics and despite my festival fatigue, he got my feet tapping and head nodding. He also gets credit for the impressive visuals accompanying him, adding layers onto the experience. In the immortal words of Gísli Pálmi himself: “Roro, efnið, slow-mo, flexing”. 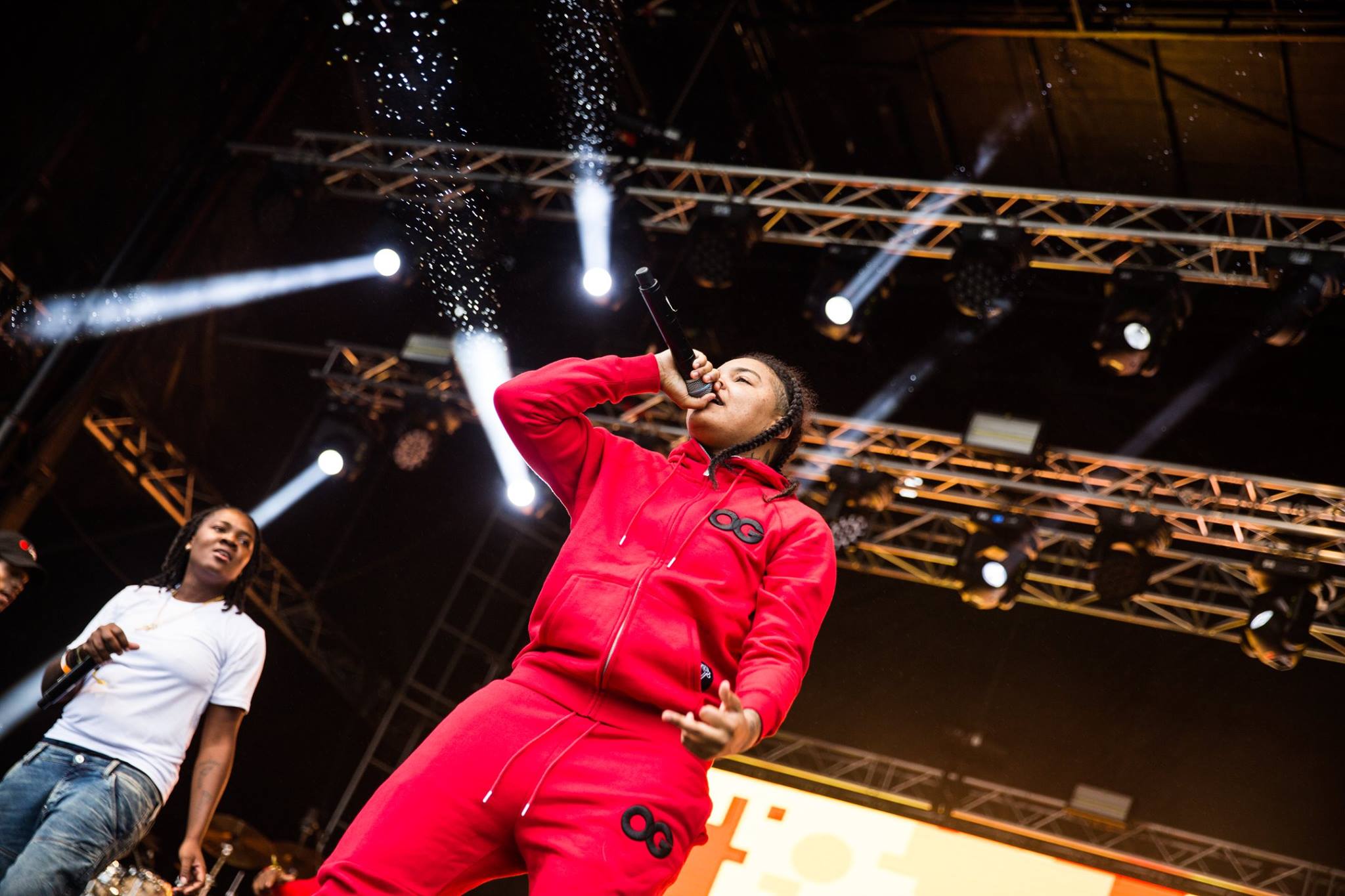 Tara – Right after Emmsje Gauti we were going to see Gisli Pálmi but my daughter wanted a tattoo so we took a break from dancing and rapping. Next on the big stage was the proud Brooklyn rapper Young M.A. Opening the stage was a woman with a powerful voice with an energetic performance. It came as a surprise to me when after few songs she introduced the Young M.A. to the stage since I assumed she was already there! Another male rapper joined them and the sound of those three voices on stage braided beautifully together and made a thick soundwave that made the crowd moving.
Unfortunately, my baby did not agree with me and the crowd on Young M.A’s excellence so we skipped the second half, which I’m still grieving.

Gréta – We stayed by the grand Valhalla stage after Gísli Pálmi’s act to check out Young M.A coming up next. This Brooklynite rapper seemed unimpressed with the Icelandic weather but determined to get the crowd dancing, starting her show with her hype woman getting the people going with a medley of popular hip hop songs. When Young M.A came on we were all ready to be wowed. She’s an interesting act and I like the stuff I’ve heard before but her show wasn’t enough to keep me going. Her habit of playing half her song, then stopping the playback and doing the rest a capella was getting on my nerves by the end of the show.

Gréta – Since Young M.A wasn’t living up to expectations, we wandered around the festival site for a bit, figuring out what to do next. This included a visit to the shopping tents by the Askur stage, a collection of vendors selling clothes and accessories to the ill-prepared visitors who had forgotten their chokers, round sunglasses, and flower headbands at home. I’d fulfilled all my shopping needs before the festival so we wandered over to the Gimli stage where Kiriyama family were doing their thing. They’re competent musicians and seemed to have a good vibe going but somehow their music never seems to stick in my memory after they stop playing. We did get some decent burgers, though. 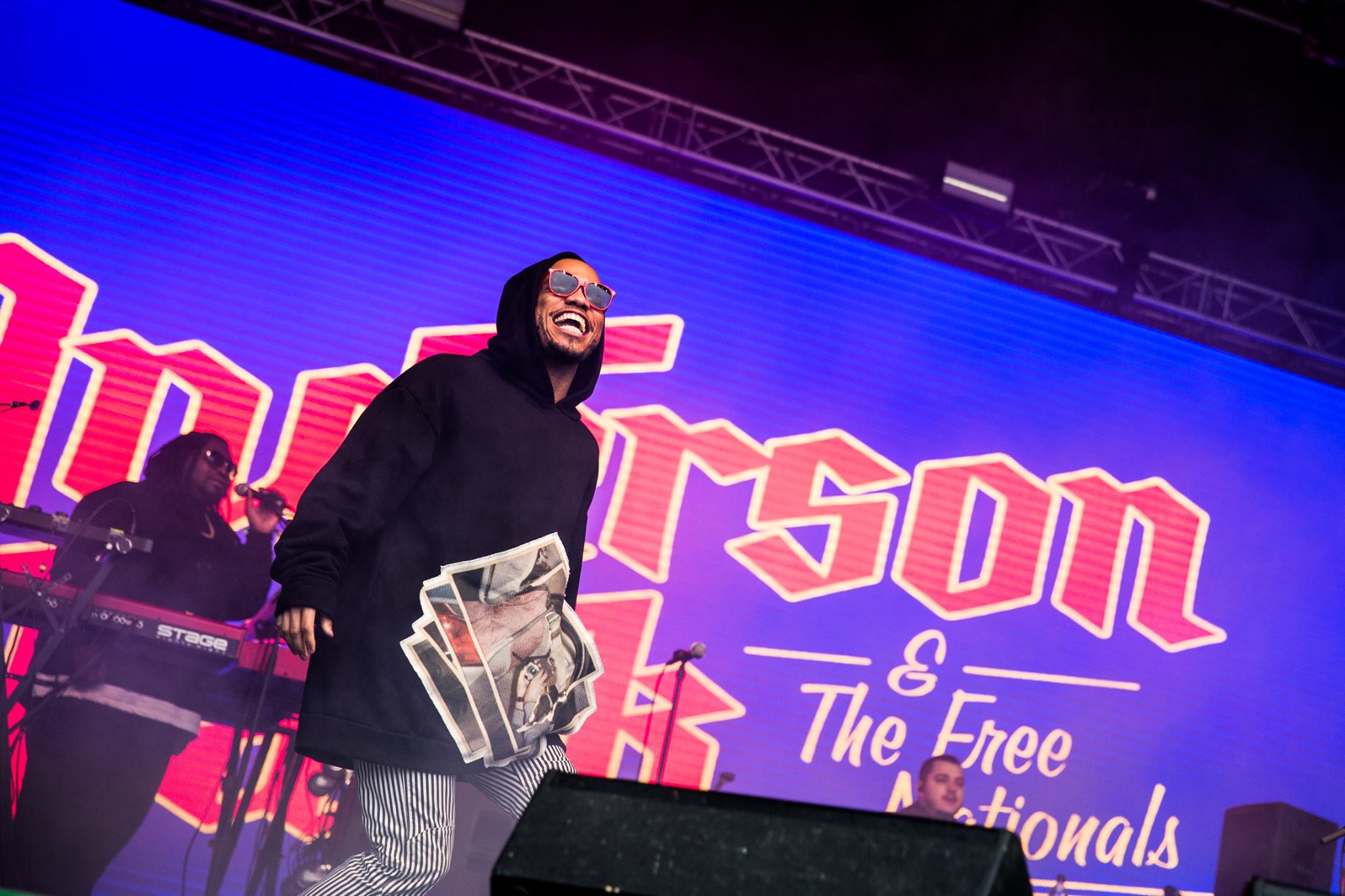 Anderson .Paak and the Free Nationals

Gréta – With our bellies full, it was almost time for Anderson .Paak and the Free Nationals, the act I was most excited to see. I was actually so excited that I was beginning to worry that the show wouldn’t live up to my expectations, having had a disappointment or two during the festival. I’m happy to inform you that my worries were unfounded, Anderson .Paak was the highlight of the whole festival. As soon as he came out and started his seducing the crowd with Come Down, I was hooked. He had the crowd eating out of the palm of his hands and when he sat down to play a song or two on the drums, I’m pretty sure that about 70% of the people present fell deeply in love. A particularly intimate moment Anderson shared with a mic stand had me blushing and all the songs had me moving and clapping along. 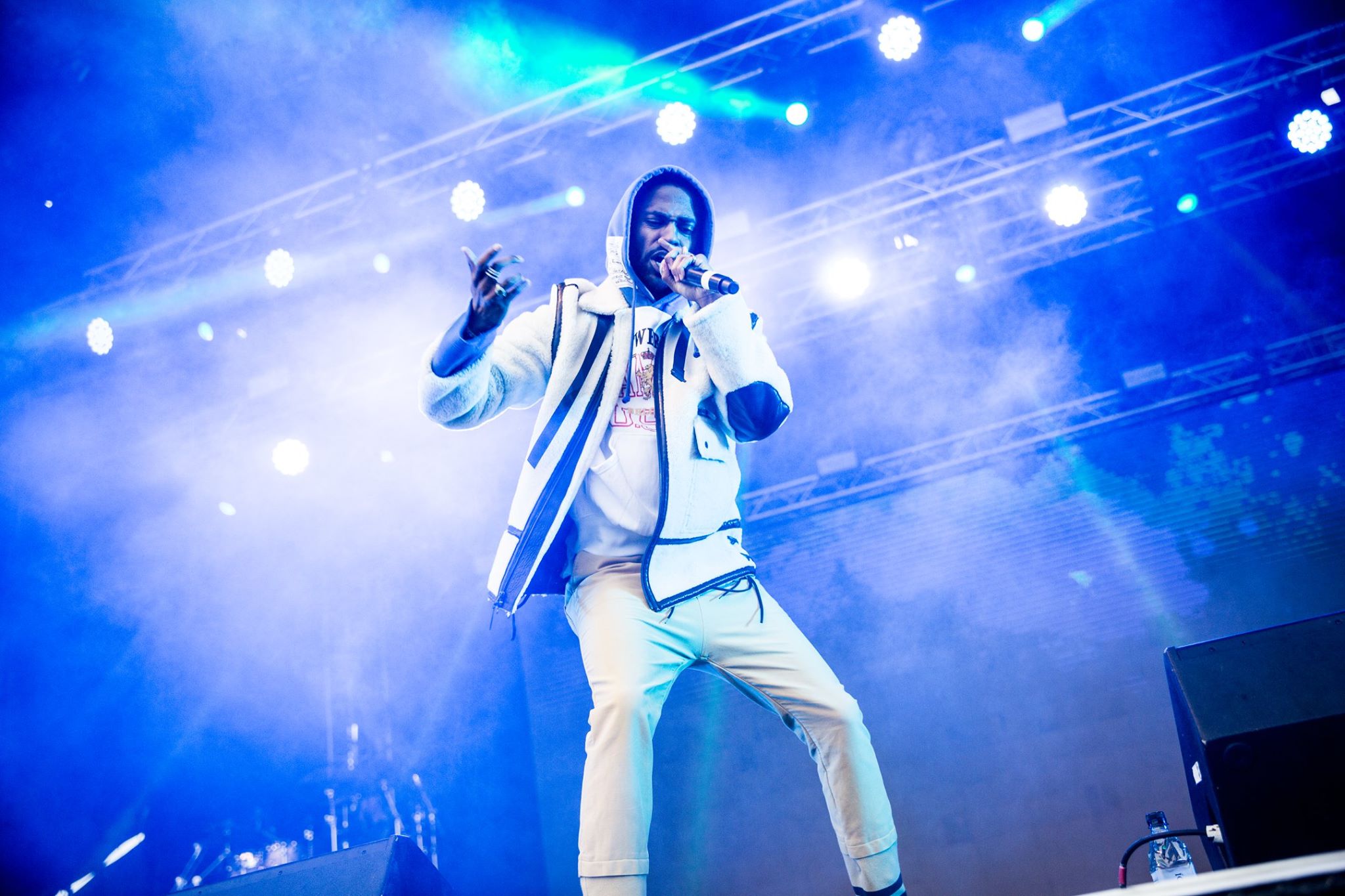 Tara – Now it was mama’s time to party and who better to get me going than the rapper who travelled all the way from Detroit, Big Sean. With cool visuals and hit songs like “I don’t fuck with you” he had the crowd completely in his pocket. A perfect beginning to a baby free night with a drink in my hand and rhythm in my body.

Gréta – Next up was Big Sean, a musician I would describe as a guilty pleasure if I believed in associating guilt with pleasure. He did his thing pretty well but to be honest, Anderson .Paak was a hard act to follow. I did dance to the hits I was familiar with and shout some profanities at my fellow concertgoers when I knew the lyrics. Big Sean also had some great visuals going on and it’s always nice to have something pretty to look at while listening to songs about bouncing booties. 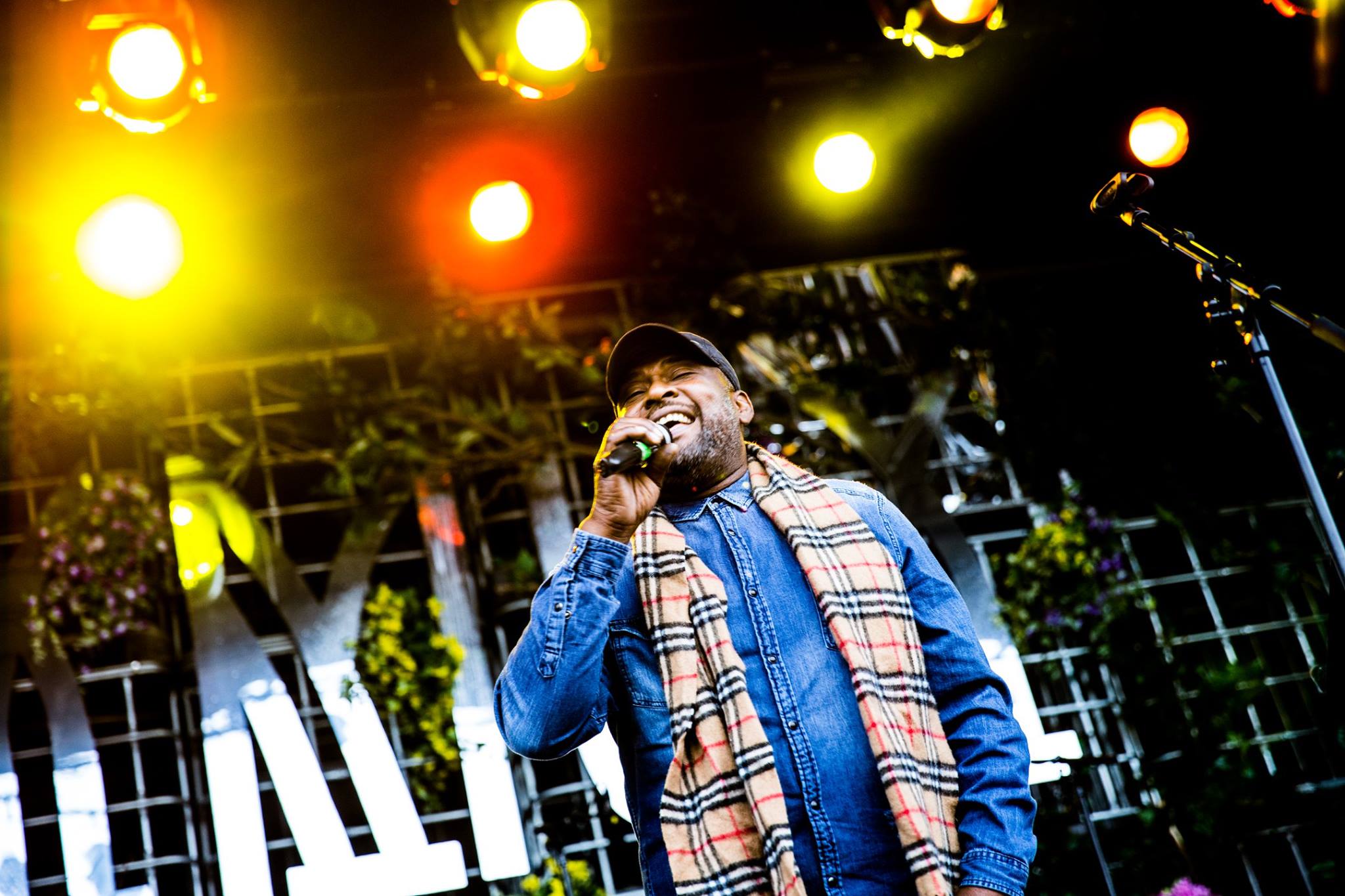 Tara – Taking a break from all the rap, the British funk innovators Cymande playing at Gimli was the place to go.  Style apparently isn’t attached to clothes since they were wearing denim on denim and a Burberry print scarf and still had the most class of the acts that night.
If I was religious, watching them would be like going to church. Their music and their message got me high from meditative breathing and slow movements throughout their performance, leaving me as if coming from a Caribbean spirit retreat. Even the weather God agreed with their music and kept it dry for their whole performance.
Seeing other acts in between we always came back to the age presidents with the most beautiful energy I’ve ever witnessed.

Gréta – In the end, we left Big Sean’s show early to check out Cymande, a 1970’s funk band who’ve recently reunited and who my sister had recently discovered. I didn’t really know what to expect when about ten old men started lining up around the stage, all wearing adorably mismatched hats and scarves. It was refreshing to see people holding instruments as many of the shows relied on a DJ for the sound and Cymande went all out, with saxophones and other wind instruments included. Not only did they have an impressive amount of instruments on stage, they also knew how to use them! The smooth jazzy funk didn’t seem to be from the 70’s as much as timeless classics and their music had us returning to their stage again and again. 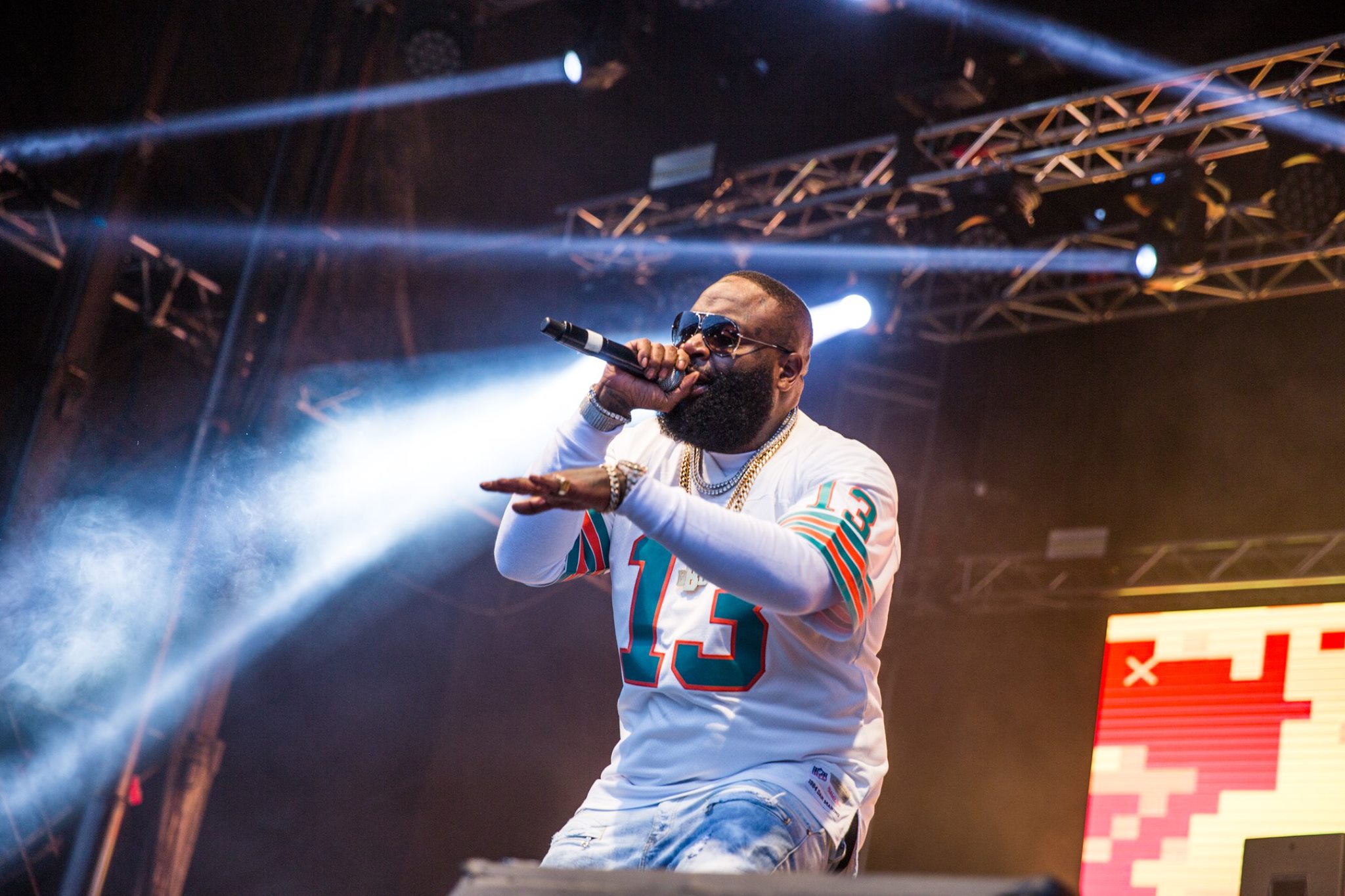 Tara – Next was checking up on the American rapper Rick Ross who had good hustle going on on the big stage.
Being the visual person I am I did feel as if he missed the opportunity to create complimentary art to use on the big screen behind him. Even though the crowd was cheering for this big star, my heart and body quickly wandered back to Cymande which made the perfect end to a fantastic festival.

Gréta – Leaving the Cymande show to check out Rick Ross at the big stage was a grinding change of gears from the laidback mood of Cymande. Having already seen Big Sean, Young M.A and Gísli Pálmi that day, I’d had my fill of swagger and bravado for the day so I’m afraid Rick Ross didn’t really have a chance to win me over.

Tara – A dance party at Askur? Hell yes. The stage was crowded with colourful artists and the music was like nothing I’ve heard before. The Brooklyn-made duo aim is to move hearts which they not only did but bodies followed. They didn’t need a big audience to make a fantastic atmosphere which left me wondering where they had been all of my life.

I feel incredibly proud being an Icelander after witnessing the Secret Solstice Festival.

Gréta – It had been drizzling a little the first half of the night, not full-on rain, just enough to make you keep your coat on but by this time of the evening, the weather was beautiful, the air was still and warm(-ish, this is still Iceland) so when we headed over to the Askur stage, where a small group of people was dancing on the grass by the colourful stage. Joining the group, this was one of those perfect festival moments, when the music, the crowd, and the atmosphere line up perfectly for a period of carefree joy. When their set was over, we just moved over to Cymande’s show, still going strong, to finish the night.