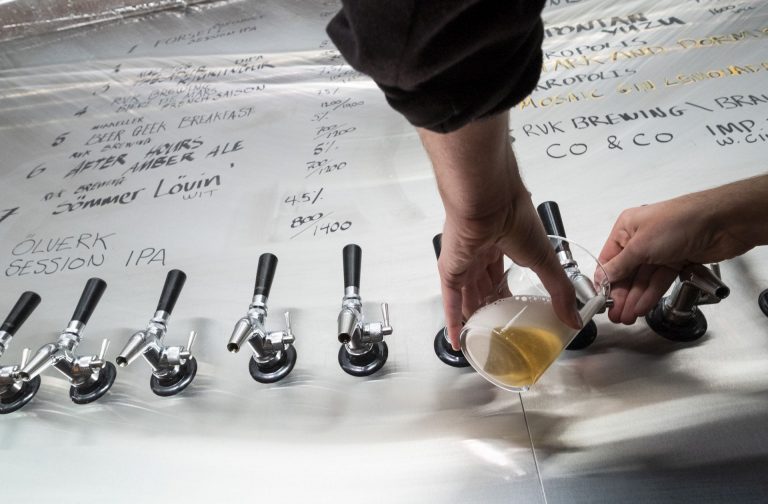 Finding the right bar is not always easy. Sometimes you want a quiet night with your sweetheart, other times you want to get rowdy with the girls (or boys). Reykjavík is home to several different pubs that can offer you a variety of experiences. Here are some of our favourites.

Ölstofan is slightly off the beaten path, tucked away beneath a classic sign of a moustached man. If Reykjavík had a Cheers, this bar might be it. Great and affable bartenders, colourful regulars, and a cosy atmosphere make it the perfect place to either start or end your night. The life of the party is often in the heated smoking room. If you want to get a great drink and mingle with some locals, Ölstofan is a great choice.

The craft beer movement came a little late to Iceland, but a handful of bars have popped up over the last 5-10 years dedicated specifically to craft beer. Above the Subway on Bankastræti is a terrific bar called Session that offers beers from some of the best up-and-coming craft breweries in the city: RVK, Malbygg, and Lady Brewery, just to name a few. There is a vague Miami Vice aesthetic in what used to be a hair salon. But it is the perfect spot to gather with your friends and splurge on a quality IPA.

Microbar was a pioneer in the craft beer game in Iceland, the first bar to focus on beers from microbreweries – from Iceland and around the world. They’ve shifted locations a couple of times since they started up but their microbrew selection still holds up!

Although not strictly Icelandic – Brew Dog is actually a chain from Scotland – Brew Dog serves a huge selection of their own beer alongside some of the best beer Iceland has to offer. It is the perfect place to start your evening. Their killer menu (we recommend the chicken and waffles!) will keep you seated long enough to try several of their premium craft beers. There are plenty of booths that give this craft bar a cosy classic pub feel. But even if you have a huge group, you can reserve the huge table downstairs. You won’t find a more diverse selection of tasty beers anywhere else in the city!

Röntgen is the best place to end the night. It is one of the most popular bars in town, especially for the younger crowd. There may be a long line to get in on a late Friday or Saturday night – but that is because Röntgen is where the party is. They always have a solid selection of beer available but also under-the-radar great cocktails – not to mention fantastic DJs and atmosphere – it is THE bar to let your hair down, dance, and maybe even meet someone.

For many years, Einstök beer has been a staple of beer culture not only in Reykjavík but also in many other parts of Iceland and the world! Born in 2011 and brewed in Akureyri in the north of Iceland, Einstsök quickly gained the attention of consumers and critics alike. Their ales have won international beer awards, and their distribution has brought Icelandic beer arguably further across the globe than any other company. In 2021, the company opened their own tasting room and bar on Laugavegur, the main shopping street in Reykjavík to the delight of locals and tourists alike.

Sometimes you want a night out and sometimes you want a good beer with friends. For the latter, Skúli is a great spot. It’s smack dab in the city centre but a little out of the way, making it a little quieter than other spots, but serves a quality lineup of some of Reykjavík’s most exciting craft beers. On a sunny day, having your beer outside on the Sheriff square is a must (Skúli was the namesake sheriff in question) but on any night, a game of foosball makes a beer go down even smoother.