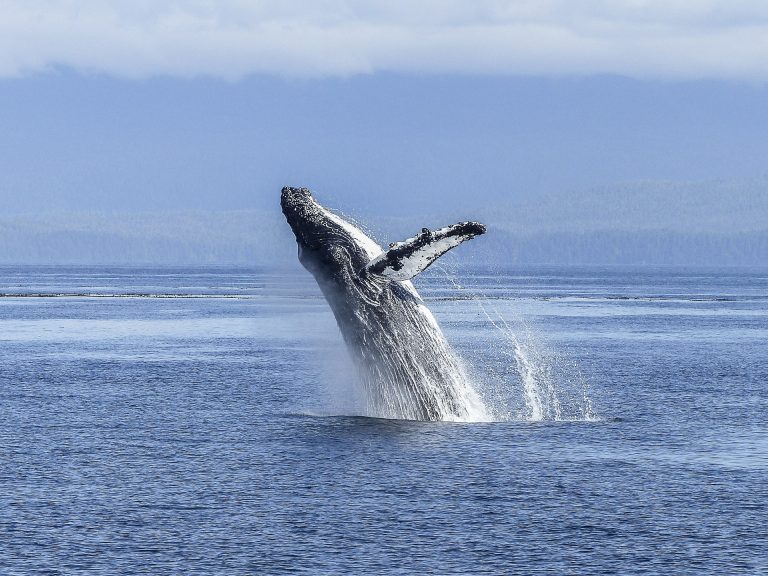 Do you want to have a whale of a time? The waters around Iceland are the natural habitat of these gentle giants, so this is the perfect place to spot them. Baleen whales are a migratory species, and most travel long distances to tropical waters in winter and back to polar regions in summer. The best season for whale watching in Iceland is, therefore, between April and October. Going on a whale-watching tour and actively searching for whales is an exciting and unique experience!

Whale watching in the Capital Area

You don’t have to travel far to go on a whale safari, as Reykjavík offers good options for whale watching. Different whale-watching companies have regular departures from the Old Harbour area. White-beaked dolphins and harbour porpoises are seen year-round in Faxaflói bay, a large bay next to Reykjavík, stretching from Reykjanes to Snæfellsnes.

In the summertime, there are regular sightings of humpback whales and minke whales. You can choose to go on a bigger boat with a refreshment bar, or on a small RIB. The bigger boats have snug inside areas that offer shelter from bad weather, but the small boats have the advantage that you can get very close to oceanic wildlife. At the ticket offices you can ask for complimentary motion sickness pills, but don’t worry, tours are cancelled if the waves are too high.

Whale watching outside the Capital Area

You can also see whales outside of the Capital Area. In wintertime, the fishing town Grundarfjörður is where it’s all at. The bay is filled with herring feeding on phytoplankton. Now, seeing breaching herring is probably not the reason why you travelled to Iceland. However, this herring aggregation attracts all kinds of cetaceans, like dolphins, porpoises, and most importantly, killer whales!

Can you think of anything more spectacular than seeing a pack of killer whales swim by? There are also excellent whale-watching opportunities in North Iceland. The town Húsavík is also known as the whale-watching capital of Iceland, because of the many whales in its bay, Skjálfandi bay. Humpback whales, blue whales, minke whales, pilot whales, and sperm whales are often sighted. Because of the deep waters in the bay, there is also a higher chance of seeing rare species like the basking shark, the northern bottlenose whale, and the beluga!

In summer, puffin colonies are found all around Iceland. The first small flocks arrive in April and the last ones leave in September, but the best months to see puffins are between May and August. Most whale-watching companies offer whale and puffin combination tours. For puffin spotting, it’s best to be on a small boat and to bring binoculars. Puffins are tiny, and the closer you can get to them, the better the experience will be! These puffin tours are possible from Reykjavík. Just off the coast of the city, puffins breed each year on three small islands. Next to puffins and whales, common sights during these tours include arctic terns and the great skua.

• Minke whale: a small baleen whale measuring 7m to 8m in length, weighing between 5 to 10 tonnes. It’s black- and grey-coloured, has a dorsal fin, and will live for 30 to 50 years. It’s not likely to breach, so look for its back and dorsal fin during a tour. Also called “stinky minkes” because they smell of rotten fish.
• Humpback whale: a large baleen whale measuring 12m to 16m in length and weighing about 36 tonnes. It has long pectoral fins, a stubby dorsal fin, and a knobbly head. They are known for breaching, their high spouts of water, and for showing off their flukes as they go for deeper dives!
• White-beaked dolphin: the most common dolphin in Icelandic waters. It is 2.5m to 3m in length and weighs up to 350kg. They are often spotted in big groups, sometimes hundreds together! They love playing, jumping out of the water, and splashing about.
• Harbour porpoise: the smallest cetacean around Iceland. They are only 1.5m to 2m in length and weigh 55kg to 70kg. They are usually quite shy, but sometimes jump out of the water and play with the whale-watching boats.

Whales of Iceland is an exhibition in the Grandi area of Reykjavík. It showcases 23 man-made life-size models of whale species that occur in Icelandic waters, like a 25m-long blue whale and a full-size sperm whale. It offers a great opportunity to see the actual sizes of these whales (they are even bigger than you think!) and to learn interesting facts about each whale at the same time, by reading information stands and watching videos. Educational and fun!