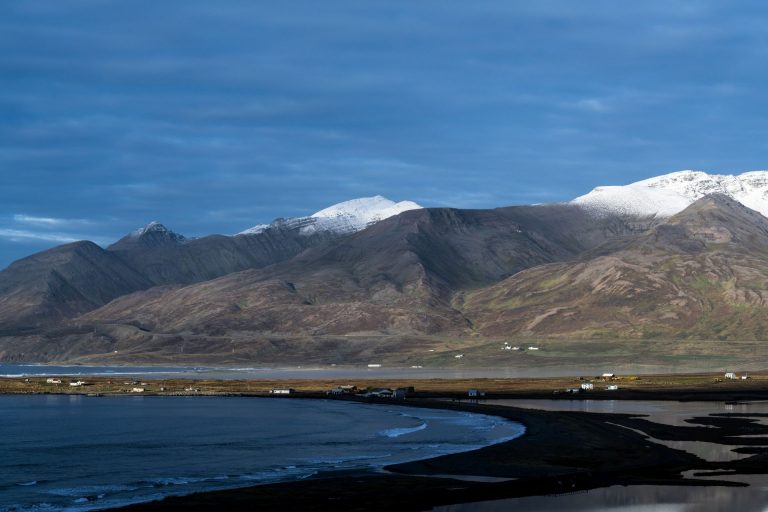 Things to Do in the Skagafjörður Region

Skagafjörður is a fjord and municipality in North Iceland. Compared to the often-travelled south, Skagafjörður is less crowded and touristy. What’s more, it’s home to many hidden gems. In this article, we will tell you about all the spots you should check out when you are in the Skagafjörður region.

Hofsós is a swimming pool located on the east side of Skagafjörður fjord. The pool is designed by Basalt Architects, that also designed parts of the Blue Lagoon. The pool blends in with the landscape and offers amazing views of the fjord, mountains, and Drangey island. Even though the pool is not large, it can fit quite a lot of people and it resembles an infinity pool. The water of the main pool is around 31°C, and of the two adjacent hot tubs 37°C. From time to time, you can see whales playing in the fjord while you’re soaking in the warm water. There are modern changing facilities and showers on-site and free coffee is served in the reception area.

The pool is too far from Reykjavík for a day trip, since it takes more than four hours to get there, but it’s a highly recommended stop if you’re in the area. From Reykjavík, head north along road no. 1 and turn left on road no. 76 and then left to the village Hofsós, the pool is located in the village, by the coast.

Glaumbær is an impressive historical site containing an old turf farm and two 19th century timber houses. The farm consists of 13 buildings dating back to the mid-18th up to the 19th century, on a site that has been inhabited since the age of settlement. The last inhabitants moved out of Glaumbær in 1947. The site has been a museum since 1952, shortly after the last inhabitants left. Currently, it exhibits artefacts from rural daily life in the 18th and 19th century. From Reykjavík, head north along road no. 1 and then turn left on road no. 75 at Varmahlið. Glaumbær is on the left side of road 75.

Technically not in Skagafjörður, but very close to it, is Hvítserkur. Hvítserkur is a unique rock of 15m tall in the shape of a dinosaur, dragon, or, as some people say, a giant cow. Folklore goes that Hvítserkur once used to be a troll with the same name living in Strandir in the Westfjords. One night, Hvítserkur wanted to destroy the church bells of Þingeyraklaustur monastery on Vatnsnes peninsula, annoyed by their sounds. Too taken up by its task, the troll was caught by sunlight and petrified instantly. Read a longer version of Hvítserkur’s story here. Hvítserkur is located on the eastern shore of Vatnses peninsula in the northwestern region. It is a 3-hour drive from Reykjavík, to the east of road no. 711. Walking down to the beach, you might see seals and fulmars, but watch out for overly protective arctic terns in summertime.

In Icelandic sagas, Grettir Ásmundarson is depicted as super-humanly strong, slightly magical, and not quite good or bad. He performs feats of courage and strength such as killing a bear, slaying ten berserkers in Norway, and wrestling a ghost called Glámur into submission. The story ends tragically, however, because the ghost curses him, and his fate always turns against him even when his intentions are good. One of the most famous stories of Grettir come from the end of his life. He had been banished from Iceland so he and his brother Illugi settled on Drangey island, in Skagafjörður fjord. One particularly cold winter, their fire went out, and they had no means of making more. So Grettir swam to the mainland to get fire and is fabled to have warmed himself at the hot pool now named Grettislaug (Grettir’s pool).

The pool is still there so you can warm yourself just like Grettir did. Just remember to pay a small fee to the landowners and be considerate when bathing and leave the place like it was when you found it.

Blönduós is a small town located in the fjord next to Skagafjörður, Húnafjörður. In Blönduós, you will find Iceland’s only textile museum. The museum hosts exhibitions on handicrafts like embroidery and woolwork, and showcases different fabrics, textiles, textures, and garments. It also has several Icelandic national costumes on display, and one room is dedicated to the life and works of Halldóra Bjarnadóttir (1873-1981), a pioneer in education of women and promotor of the household industry. The museum was founded by the Women’s Union in East Húnavatnssýsla in 1976.