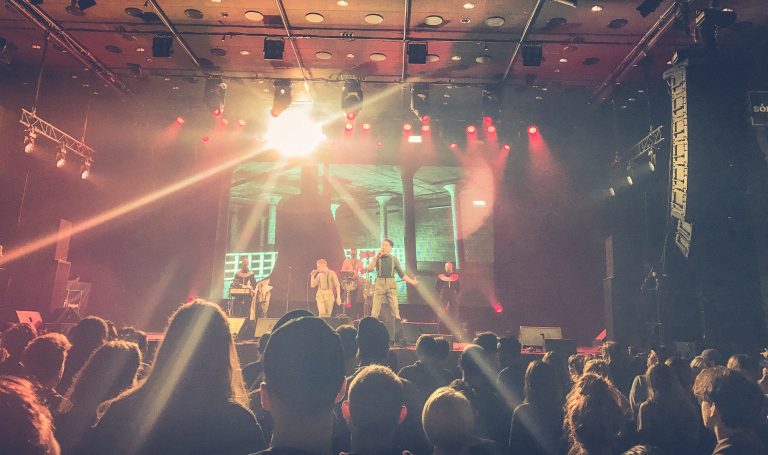 Thursday At Sónar Took Us To Space And Back

Buckle up, kids, it’s Sónar time again! A dance music fever has taken over Reykjavík and the Harpa concert hall is booming every night this weekend! If you can’t make it to Reykjavík in time for tonight, first of all, book a flight for next year as soon as you can. For now, however, you’re going to have to dance vicariously through the What’s On correspondents attending Sónar this year. Here’s a little recap of Thursday at Sónar by Gréta and Ásdís! This is Gréta’s first time at the Sónar Reykjavík Festival but Sónar guru Ásdís’s third time. As a veteran on the scene, Ásdís obviously has the educated view while Gréta brings a fresh-faced naivité to the story. 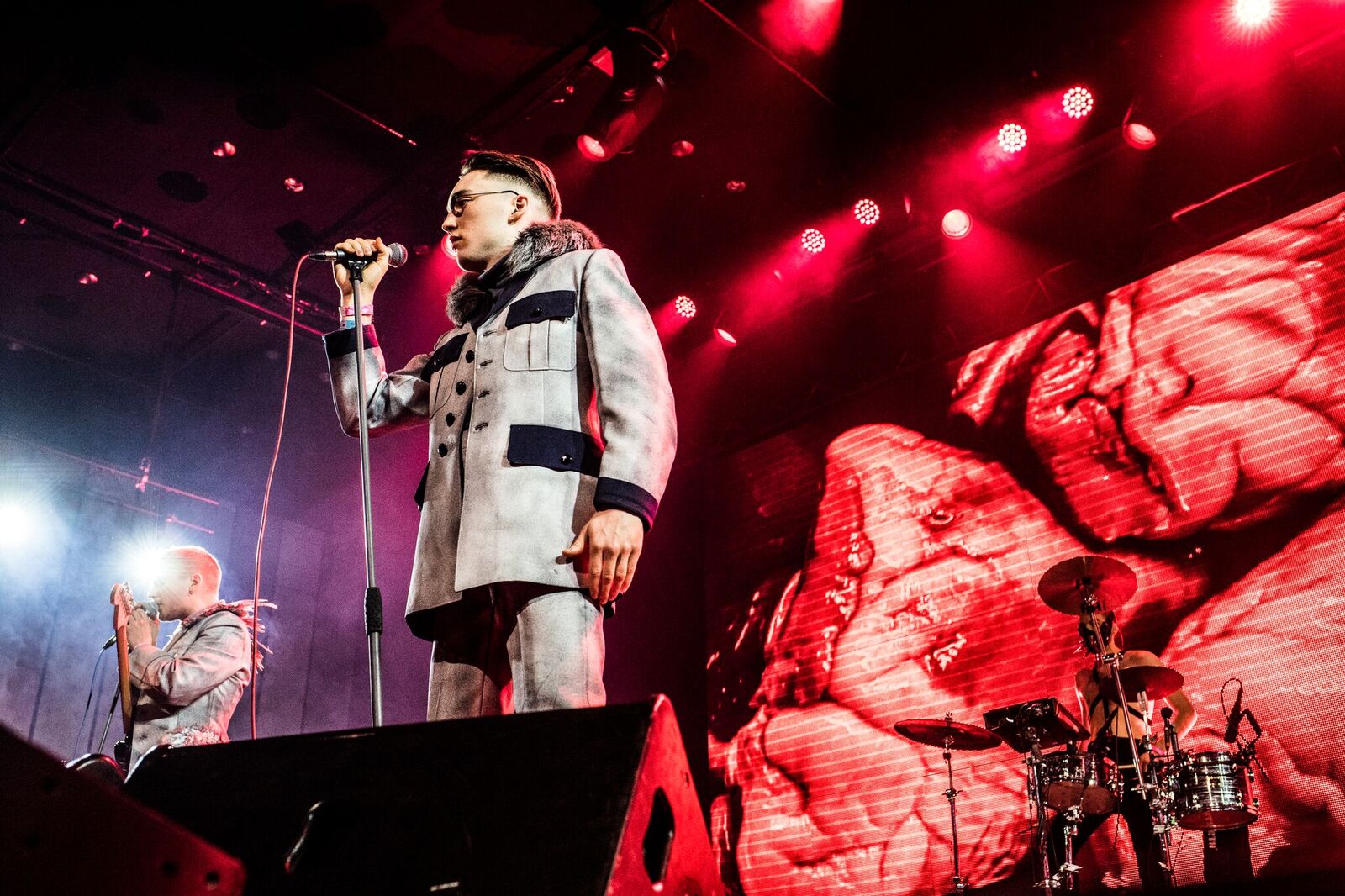 Gréta – After a lovely dinner of sushi and white wine, we strolled down to the Harpa concert hall and were greeted with our first act of the evening, Hatari. Hatari (e. Hater) have been getting a lot of attention lately, especially for a band with almost no recorded music on the internet, for their attention-grabbing live performances that feature what can only be described as post-apocalyptic nazi slave master bondage aesthetic. Think Mad Max: Fury Road meets the third Reich. While it’s definitely intense, I do love that they put this much effort into their look. It takes the performance to a whole new level. The music is a striking mix of dance music and shouted dominance-themed lyrics but strangely, it sort of works, especially when you get used to their look.

Ásdís – I’d only recently heard of this band and was curious to see them perform. Although they probably would have given my mum a heart attack, I enjoyed the performance. I felt like I was in the theatre. Despite all the hatred that was going on there, they left me wanting to see more and I look forward to more concerts. 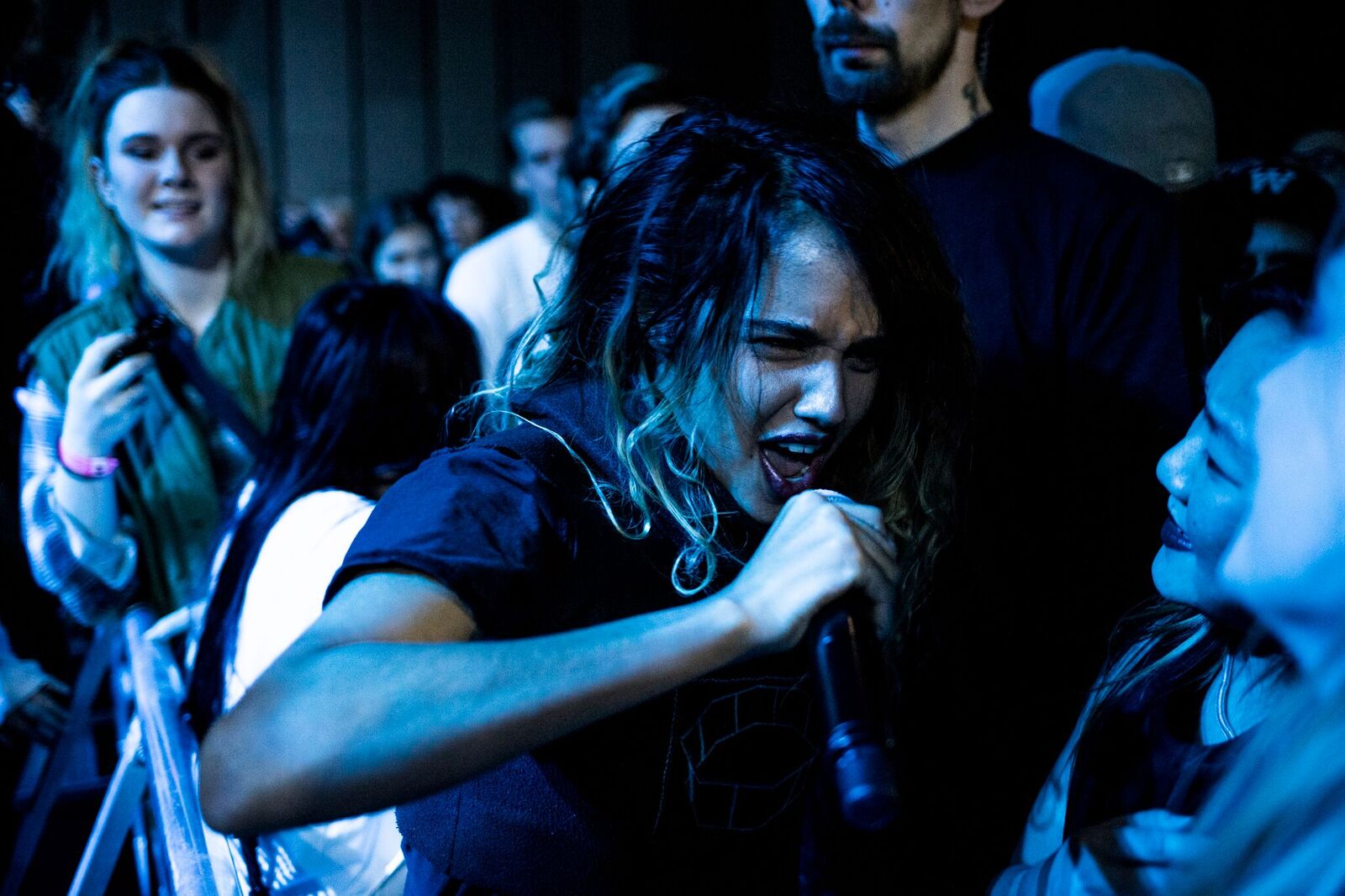 Ásdís – One of the artists that I was looking forward seeing the most this evening was Tommy Genesis. I admit, that I hadn’t listened to her music much, until a week before the festival. This young Canadian-born rapper is fierce and laid-back. I like listening to her music at home, but I have to say that I was a bit disappointed. Her voice, and her presence wasn’t very strong, and she kept asking to turn down the lights. As soon as she got on stage, she went down to the floor/crowd and finished a whole song there. I liked that, it’s something different, and gave her fans a chance to be closer to her. I decided to check out another artist, while my friends stayed there, and apparently the end was also quite weak as well. Maybe this was just not her day, but I was expecting a bit more. 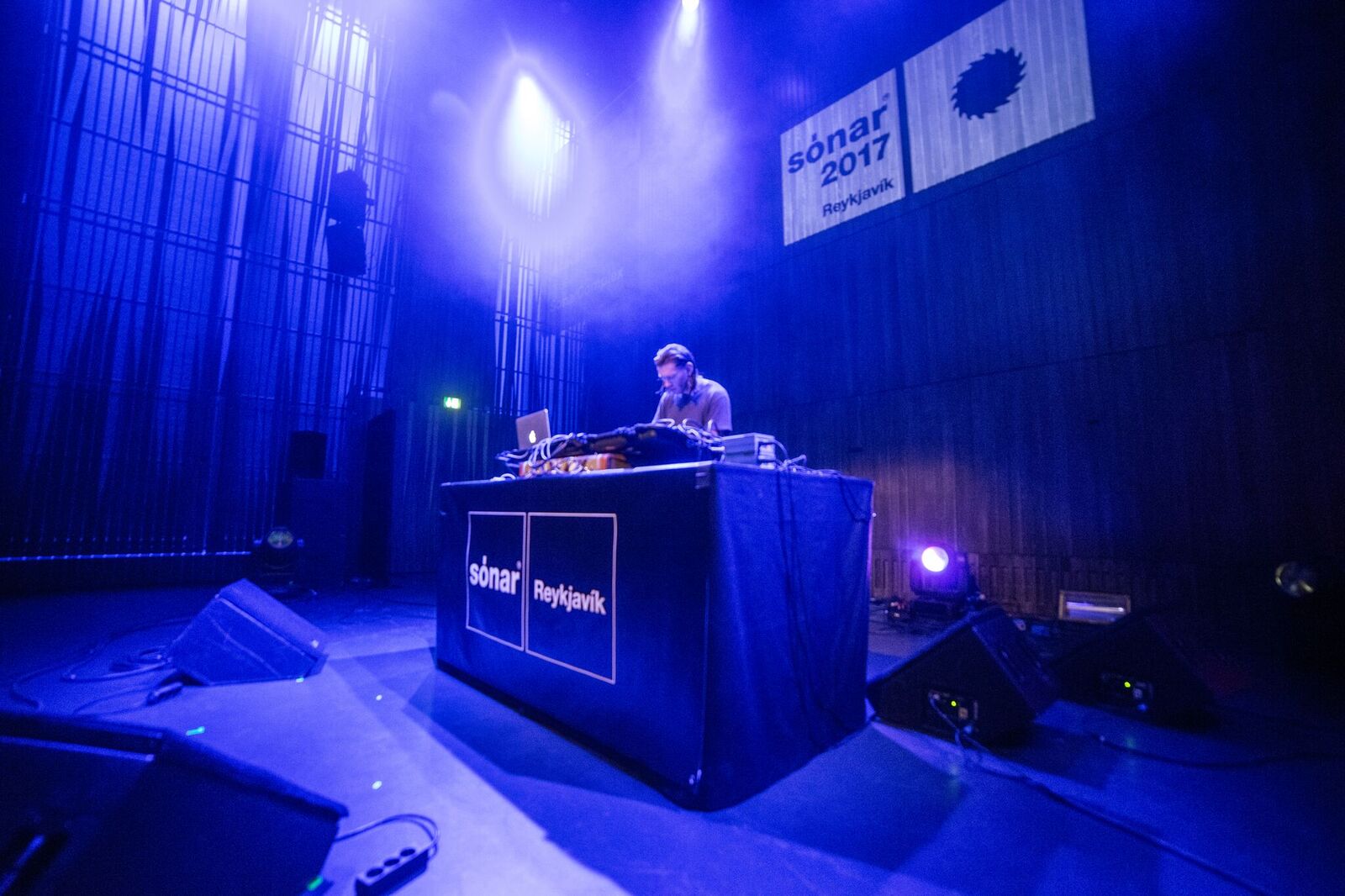 Gréta – After a slow start to the Thursday night, and an attempt at some unenthusiastic dancing at the car park club, we wandered into Örvar Smárason’s set at the SonarComplex in Harpa’s seated Kaldalón hall. This turned out to be just what the doctor ordered and an unexpected highlight of the evening. The hall was packed with people and all the seats were taken so we perched on the steps and were transported to another dimension on the waves of Örvar’s music. The introspective music, interspersed with voice effects created the perfect ambience.

Ásdís – I felt like I was immediately transported into a sci-fi movie, floating around in space, and it left me wondering if there’s perhaps life in outer space. The music was somehow capturing, making me want to sit there all night. I caught myself thinking how his voice really sounds and was happy to learn that he’s actually in the group FB Belfast, performing later that same evening. Who know’s, maybe he’s in all the bands! 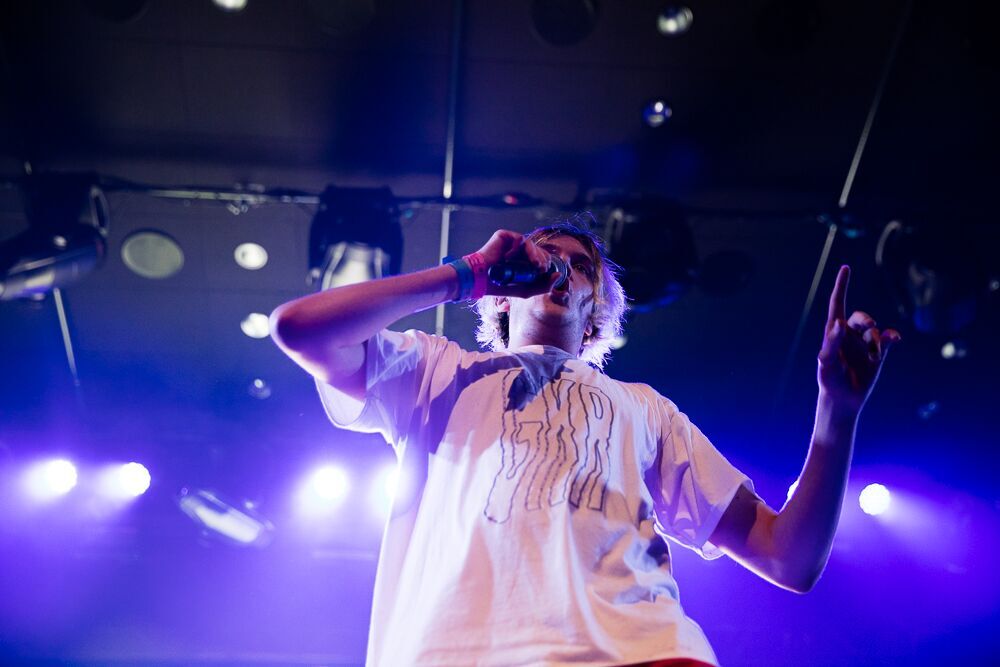 Gréta – Okay, so we didn’t see too long of GKR’s set but what we saw was enough to lift my spirits and keep them up for the rest of the evening. GKR reedy frame and his shock of bleached blond hair, along with an outfit of a red hoodie and red shorts, may not immediately inspire confidence but as soon as his set starts, his earnestly positive performance gets to you. His songs all sound like he’s making them up on the spot, somehow, but they’re fun and the beats soon get you going. His set featured some terrible 90’s looking graphics, which apparently is what the kids are into these days, but it definitely worked, fitting perfectly with his style. All in all, GKR and his music shouldn’t really work, but somehow, they do! It’s never not fun to see him live. 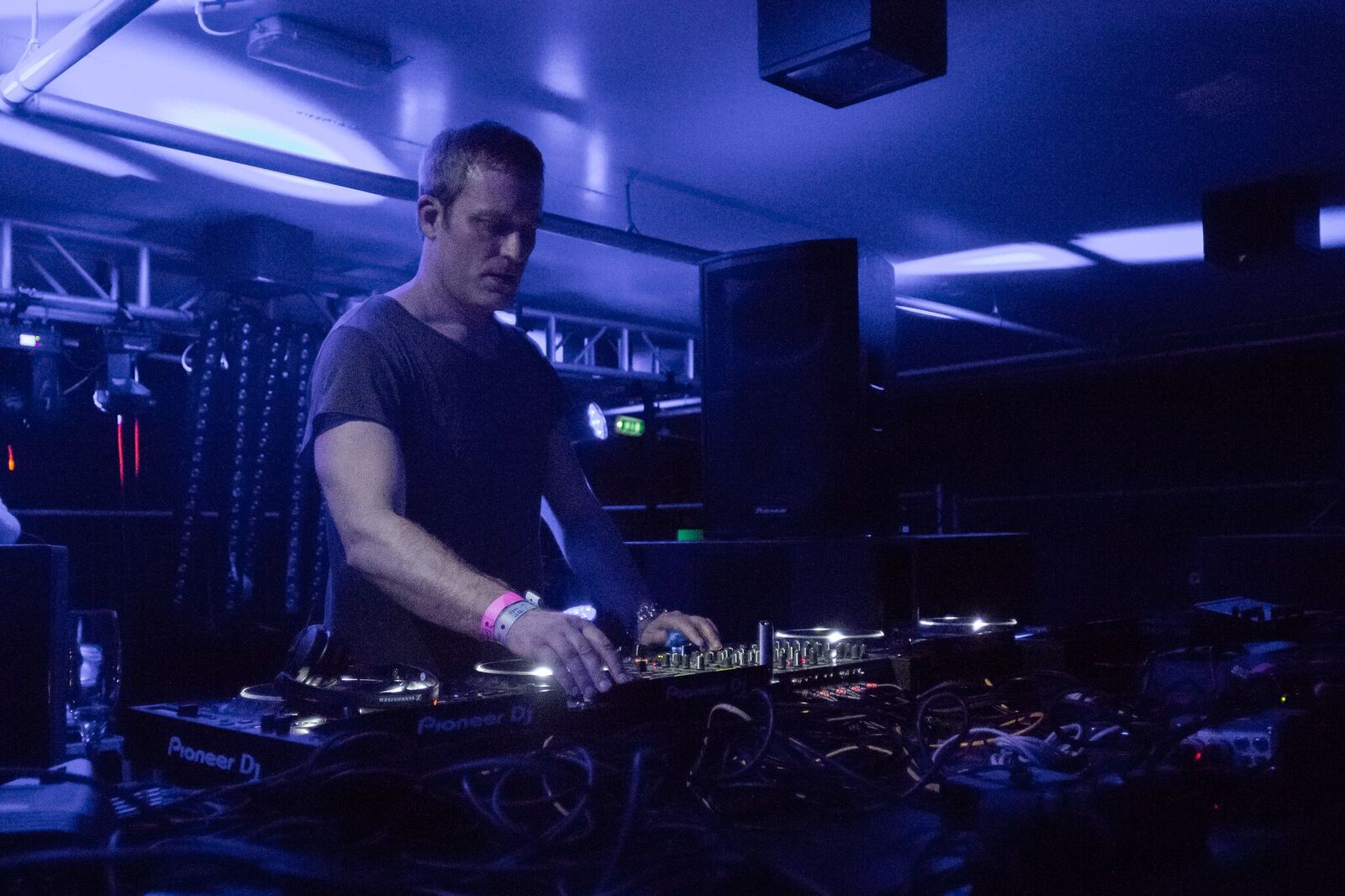 Ásdís – Ben Klock, the famous Berlin techno DJ was the biggest name of this evening. The queue reached as long as the eye could see (almost). This was my first time seeing him play, and I would do it again. If you like glowsticks, dancing in parking garages and german techno, this was the place to be. This might sound like it was too “hardcore” for people who don’t listen to techno daily but my friend and I really enjoyed it. The lights matched well with the music, and the fog machine made me feel like I was in a club – we don’t have any big clubs in Iceland so this underground car park was getting really close to that. 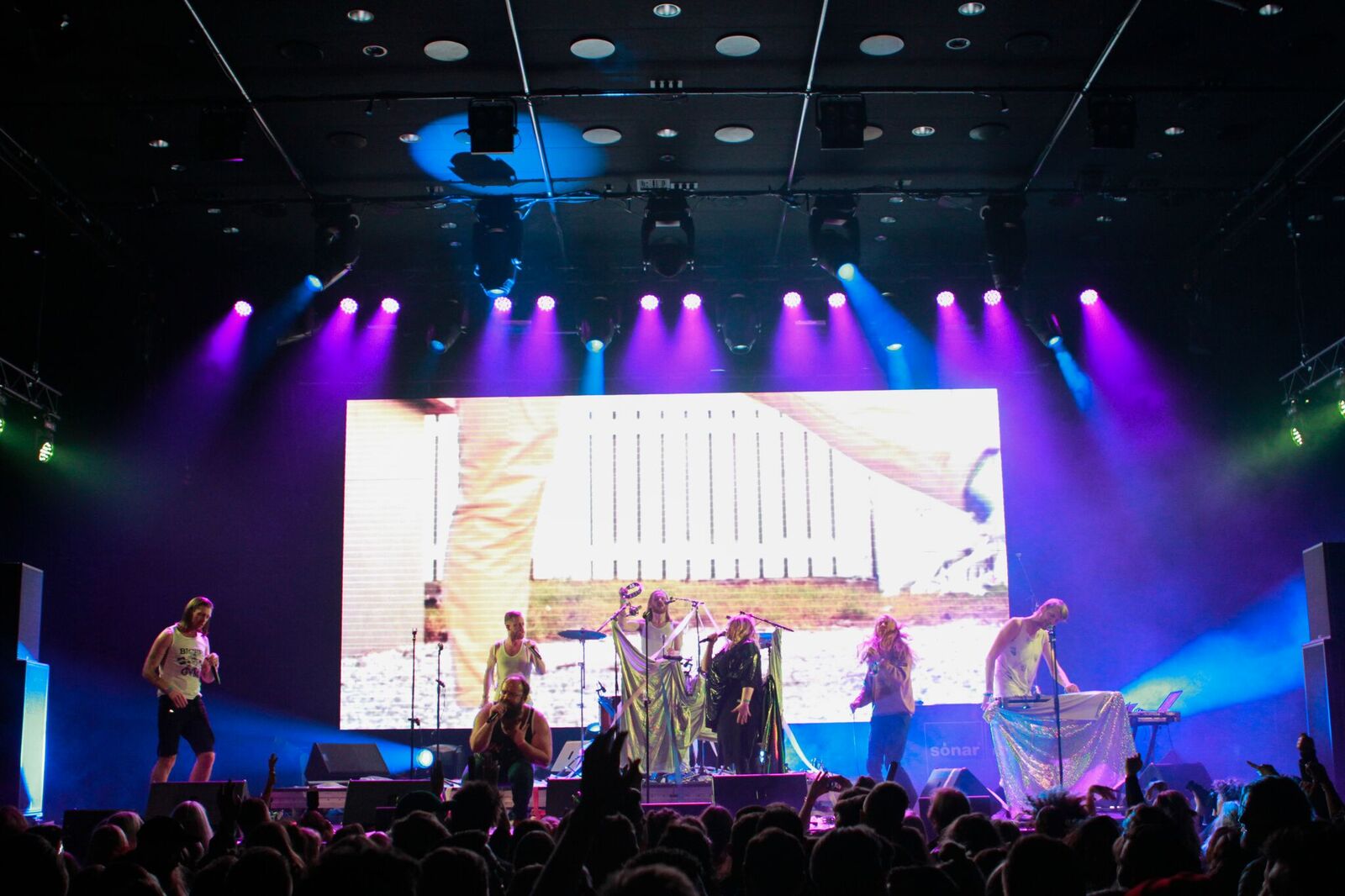 Ásdís – is a band that should play every music festival. They are uplifting, they make great music and they get to the crowd easily. And everyone likes them. If you don’t like them, maybe you don’t like unicorns either? What’s wrong with you, anyway?
Gréta – As usual, by the end of the show, most of the band had stripped down to their underwear, one guy was dressed in a beer costume, there was some crowd surfing and as a testament to FM Belfast’s amazing energy, they even managed to make the crowd dance to pub troubadour-cliché Wonderwall and love every minute of it! They were the perfect end of the first evening, making me excited for the days to come!

All in all, we were happy with this start of Sónar Reykjavík 2017. The acts were so diverse, and having the opportunity to see all these talented artists under one roof is too good to miss.

Harpa is the perfect venue for a music festival – the building is stunning, the view of the harbour is soothing, and the five different halls/rooms of Harpa manage to create a different mood in each one. We are going to write about our journey through the coming days of the festival so stay tuned!