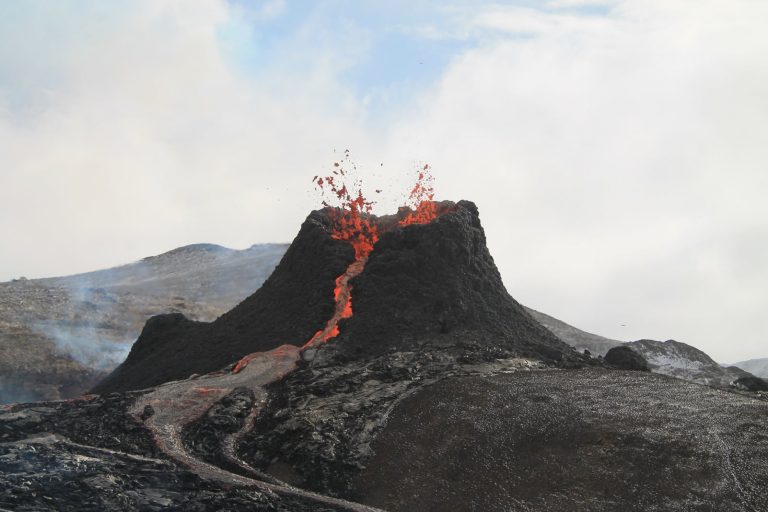 Volcanic Eruptions in Iceland: The Biggest, The Most Destructive, The Most Exciting, and More

On average, a volcanic eruption occurs every four to five years in Iceland. This isn’t surprising, considering the island has between 150 and 200 volcanoes, split into different volcanic systems. About 30 different systems are still active in Iceland, and 13 of these systems have erupted since the settlement of Iceland in 874.

Let us tell you a little bit more about these volcanic eruptions in Iceland.

The most recent volcanic eruption

Seeing an active volcano is on many people’s bucket lists. And you’re lucky enough to be able to experience this if you’re travelling in Iceland right now!

Fagradalsfjall volcano started erupting at the end of March 2021 and is still going strong at the time of writing (May 2021). The eruption poses little danger to inhabited areas and it is considered quite small. Therefore, many have dubbed it the “perfect tourist volcano.”

More than 85,000 people have already visited the site, but many more are expected when international tourism picks up later this year. Therefore, there are plans for developing better hiking paths, new parking lots closer to the volcano, and restroom facilities at the start of the hiking path.

Currently, people in good shape need about 1.5 to 2 hours to hike to the volcano. It’s also possible to reach the eruption site by helicopter.

Seeing the volcano is a once-in-a-lifetime experience!

The eruption of Laki between 1783 and 1784, is history’s biggest eruption. Laki is one of Iceland’s biggest volcanoes and when it erupted, the ash darkened the sky all over Europe for years.

The second biggest emission in recorded history worldwide, was also in Iceland – the 2014 eruption of Bárðarbunga. In just six months, Bárðarbunga produced enough lava to cover the island of Manhattan, or 85 square kilometres.

And Laki? The Laki eruption produced 370 square kilometres of lava – the size of the Gaza Strip – in only 50 days!

The most famous volcanic eruption

What happened exactly? The eruption officially started on March 20, and between April 14-20, an enormous ash cloud covered large areas of northern and western Europe. About twenty countries closed their airspace to commercial air traffic and this affected no less than ten million travellers.

Not only did the eruption disrupt flight all around the world, it also changed the local landscape drastically. Before the eruption, there was a glacier lagoon at Gígjökull close to Eyjafjallajökull, but when the eruption started, the ice started to melt, and the lagoon got bigger and bigger until it washed away in a huge flood. The area where the lagoon used to be, is now a 30 metres deep pile of volcanic material.

The most destructive volcanic eruption

In Iceland, there is a place called the Pompeii of the North. This is Heimaey, one of the 15 islands of the Westman Islands, an archipelago south of Iceland’s mainland. Heimaey is the largest of the islands, and the only populated one.

On January 23, 1973, the volcano Eldfell started erupting unexpectedly. In the early hours of the eruption, the entire population of the island was evacuated, with the first boat leaving just 30 minutes after the start of the eruption. Within six hours, 5,300 people had arrived on the mainland and were being housed by family and friends.

The eruption buried around 400 homes in lava and ash, and almost destroyed the island’s harbour. One fish processing plant was destroyed, and two others damaged, and the town’s power generator was demolished.

The most exciting volcanic eruption

The most exciting volcanic eruption took also place in the Westman Islands. The eruption between 1963-1967 formed a completely new island, Surtsey!

The eruption started 130 metres below sea level and reached the surface on November 14, 1963. In 1967, the island reached a size of 2.7 square kilometres!

Today, the island is still 155 metres above sea level. The island offered scientists a unique opportunity to follow the development of life from the moment new land was formed, and therefore it has been of great interest to volcanologists, botanists, and biologists.

Surtsey was declared a nature reserve in 1965, and in 2008, UNESCO declared the island a World Heritage Site, in recognition of its great scientific value. Today, only selected scientists are allowed to set foot on the island.