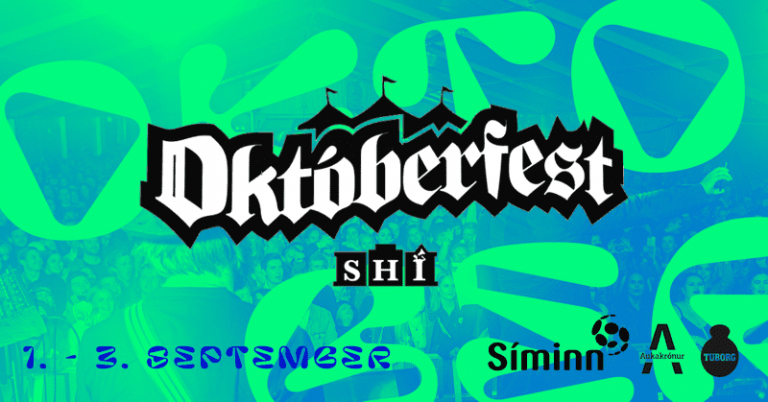 After a two-year hiatus, Októberfest, the largest student music festival in Iceland is back, in September! ( So like, who ever said Októberfest had to happen in like, October?). There are busloads of up-and-coming Icelandic bands, Gaggles of DJs, a forecourt of food trucks, oodles of beer and masses of students, you know the rest.

2022 marks the 20th anniversary of the Ljósanott (the night lights) festival. Held in Reykjanesbær a stones throw from Keflavík Airport. The town is the historic and spiritual home of Icelandic rock, (due perhaps it’s vicinity to the US base’s in the post WW2 war period). Four days of art exhibitions, street fairs, fencing contests and backyard gigs, culminate in an open air concert and fireworks display on Saturday the 3rd of September.

September’s program at Harpa concert hall kick off with ‘Favourite Classics’, as we go to print the program is TBA but it is sure to feature some favourite classics. Trifonov plays Beethoven on the 8th. The Russian pianist and 2018 grammy award winner was described by Mail as “arguably today’s leading classical virtuoso”. Trifonov will also perform a solo concert on the 10th, also at Harpa. Other highlights of the ISO’s September program includes the return of Iceland’s very own Disella Larusdottir, 2022 Grammy winner and Met vertran, Disella will perform from a light classical repertoire including Charles Ives, Mozart, and Leonard Bernstein on the 15th.

Beloved Reykjavík rockers Mammút and Kælan Mikla play a one-off co-headline show at Gamla Bíó on September 16th 2022. Critically acclaimed MAMMÚT, a household name on the Icelandic music scene are joined by Kælan Mikla, much beloved by fans of dark and dreary genre. Both acts share a sense for the dramatic and theatrical and a memorable sonic deep dive is guaranteed.

Heralded as the biggest rock punk concert in Icelandic history, Rokk í Reykjavík, brings together the elder statesman of Icelandic Punk rock with new and emerging talent. The festivals takes it’s title from Friðrik Þórs Friðriksson’s 1982 documentary film, which documented the excitement and energy of Iceland’s punk and new wave scene, clips are on YouTube if the spirit moves you. The concert is held in Kaplakriki stadium in Hafnarfjörður. Punk not dead! (It just smells that way).

RIFF, Reykjavík International Film Festival, offers a wide selection of new and independent cinema. Screening around 200 films from over 40 countries over ten days with special guests and events for film lovers and filmmakers. As ever, there’s an emphasis on highlighting the work of young and emerging filmmakers and focused programs. This year the spotlight turns to Spanish cinema and Inuit horror films.