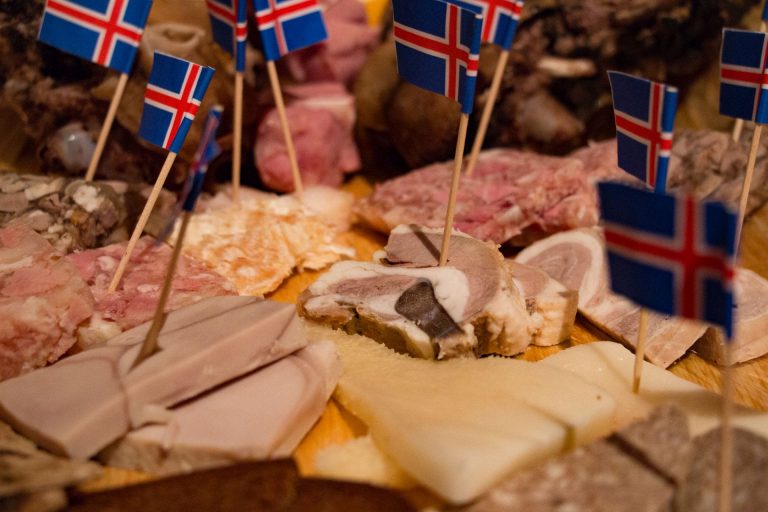 What’s on the Menu During Þorri?

Þorri is one of the months in the Old Norse calendar, roughly equivalent to modern day mid-January till mid-February. It’s celebrated with a Þorrablót (thaw-rah-blow-t), during which people gather and eat all the weird traditional foods of Iceland. Yummy! Þorrablót was originally a midwinter sacrificial ritual, dedicated to worshipping the pagan gods. With the adoption of Christianity in late 10th century, the tradition was put to an end. But in the 19th century, when Icelanders gained freedom of religion, it was revived, and it has been celebrated ever since. In this article, we will take a closer look at what’s on the menu during the month of Þorri.

These are the most popular traditional food items during Þorri.

Hákarl is shark meat that has undergone a fermentation process. The fresh shark is poisonous, but after fermentation it’s perfectly fine to eat. It does carry a pungent ammonia odour and flavour that does not jive with everybody.

Svið are sheep’s heads, cut in half, singed, and boiled. In centuries past, when food was scarce, it made no sense to throw away the head just because it looked icky. Nowadays, many find eating a whole sheep’s head somewhat uncomfortable, but you can always get sviðasulta instead, a lamb’s head terrine, which is sometimes pickled in acid whey. If you’re a first-timer, we recommend starting with the unpickled variety, acid-whey-pickled lamb’s head terrine is an acquired taste.

Súrsaðir hrútspungar are whey-pickled ram’s testicles. Another example of how food waste used to be minimal. The testes are pressed into moulds before they are cured in whey. The resulting “testes loaf” is then cut into slices for everybody to enjoy.

Harðfiskur, dried fish, is actually a popular bite all year round. Most often it’s made of cod, but wolffish and haddock are also used. It’s often eaten with Icelandic butter on top to make a salty, protein-rich snack.

Lundabaggi is a cured roll of lamb’s flank. It’s eaten cured or salted and smoked.

Blóðmör is a blood sausage made from lamb blood and suet mixed with flour, oats, and spices. It’s usually boiled and served with mashed turnips and a white sauce closely related to béchamel or cut in slices and pan-fried. It’s also served cold, with a bowl of cinnamon-sweet rice pudding. Lifrarpylsa, liver sausage, is similar to Scottish haggish, and it’s often served with potatoes.

Popular drinks include Brennivín and Þorrabjór.

Brennivín, known as Black Death is a distilled brand of schnapps that is considered Iceland’s signature liquor. It’s made from fermented potatoes, flavoured with caraway seeds and served ice cold. People often drink a shot of Brennivín when eating hákarl, as its distinctive flavour masks the taste of fermented shark.

Iceland’s craft brewery scene is booming these days, which is most noticeable in the rising popularity of seasonal beers. In addition to summer beers and Christmas beers, Icelanders like to celebrate the season of Þorri with a beer or two. Try Segull 67 Þorraöl, a dark ale/black IPA from a family-owned brewery in fishing village Siglufjörður. Or go for Þorragul, a euro pale lager brewed by Ölgerðin Egill Skallagrímsson. If you like imperial stours, try Surtur from Borg Brugghús. You can get Surtur brewed with coffee, a smoked Surtur and Surtur aged in barrels formerly housing Armagnac or rum. There are more options, just check out the local liquor stores.