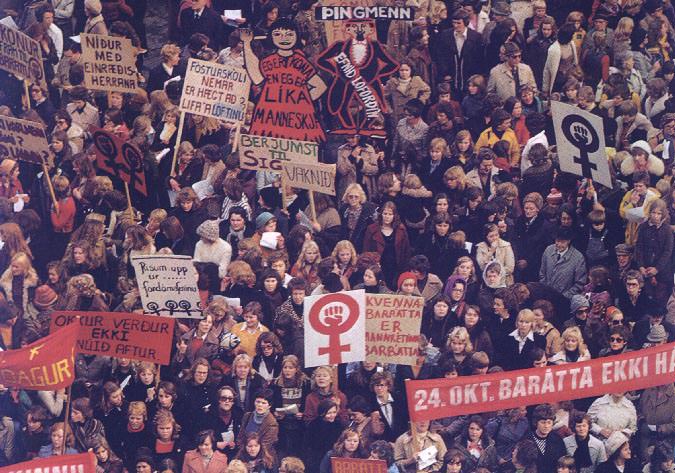 Women’s Day Off in Iceland – The Day that Changed Everything

30.000 women stand in solidarity on Women's Day off, 24 October 1975. Image reproduced by kind permission of the Icelandic Women's History Archives

Forty years ago, on 24 October 1975, something extraordinary happened. A gigantic mass meeting suddenly filled the centre of Reykjavík! Numbers are estimated between 25,000 and 30,000 people, at a time when the population of Iceland was only about 220,000. And what made the occasion unique was that they were ALL WOMEN – nearly half the female population of the Greater Reykjavík area were there, on Lækjartorg square.

The women of Iceland had taken a “women’s day off,” not only from paid work, but from childcare, cookery and housework. And 90% of women around the country are believed to have taken part in the Day Off. Women had left the men holding the baby, or taking older children to work with them, while all over Iceland workplaces literally ground to a halt. Iceland’s women had made their point, resoundingly. Down on Lækjartorg, women were being inspired by fiery speeches and feminist songs: the Women’s Day Off heralded a new age of activism for women. That extraordinary moment of solidarity and sisterhood on Lækjartorg had changed women’s perceptions of what was possible.

I wasn’t there on Lækjartorg on the women’s day off in 1975 – but somehow I almost feel as if I experienced it myself. So many women recall that day, even after all these years, with emotion and joy. It was the day that women stood up and were heard. The day it became impossible to tell women to pipe down, and stop worrying their pretty little heads about politics.

The idea for the Women’s Day Off had been sparked by the United Nations International Women’s Year in 1975. In Iceland, women were already nominally equal before the law, but there was a growing tide of discontent. More and more women were pursuing higher education and earning qualifications, and they were increasingly likely to be in paid work. However, they remained on the sidelines of public life, scarcely represented in parliament, and with poor career prospects. The rise of the Women’s Liberation movement (the Red Stockings in Iceland) in the 1970s had led to consciousness that society could be changed. And women’s organisations in Iceland decided it was time to make the point that society could not function without them. On United Nations Day, 24 October, women took the day off.

From that day, women never looked back. Five years later, Iceland elected a woman president, Vigdís Finnbogadóttir – the world’s first democratically-elected female head of state. And in 1983 a new political movement, the Women’s Alliance, won three seats in parliament. The ongoing presence of feminist voices in parliament gradually led all the other parties to start selecting more women candidates, and today 44.4% of members of parliament are women. And Iceland had its first female prime minister, Jóhanna Sigurðardóttir, from 2009 to 2013. As a result, Iceland is the most gender-equal place in the world, according to the Global Gender Gap Report.

Despite the progress that has been made in forty years, true gender equality remains elusive: Iceland has a persistent gender pay gap, and men still dominate the upper echelons of business and administration. We’ve come a long way since the Women’s Day Off in 1975. But we still have a long way to go!

The 40th anniversary of the Women’s Day Off is outshone this year by an even more momentous anniversary: a hundred years ago, on 19 June 1915, Icelandic women gained the right to vote. Throughout 2015, the centenary has been celebrated by events and exhibitions all over the country, which will culminate on October 22-23 with an international conference. The conference will be the 100 Years of Women’s Civil Rights, at Harpa in Reykjavík. And on the anniversary of the Women’s Day Off, 24 October, the feminist songs which were sung that day in 1975 will resound again in a concert at 5 pm at Iðnó by the Pond.

Ongoing exhibitions that mark the centenary year include A Woman’s Place… at the National Museum, Women’s Time at Kjarvalsstaðir, Between the Lines at the Árbær Museum and We Cheerfully Salute the Future at the National Library.